The Vatican sez, "Christians can learn much from Jewish [scriptural] exegesis practiced for more than two thousand years"

... in a letter to Prime Minister Ehud Olmert ... former Sephardi chief rabbi Mordechai Eliyahu ... ruled that there was absolutely no moral prohibition against the indiscriminate killing of civilians during a potential massive military offensive on Gaza ...

According to Jewish war ethics, wrote Eliyahu, an entire city holds collective responsibility for the immoral behavior of individuals.

The letter, published in Olam Katan [Small World], a weekly pamphlet to be distributed in synagogues nationwide this Friday, cited the biblical story of the Shechem massacre (Genesis 34) and Maimonides' commentary (Laws of Kings 9, 14) on the story as proof texts for his legal decision. (Matthew Wagner, Jerusalem Post, May 30, 2007) 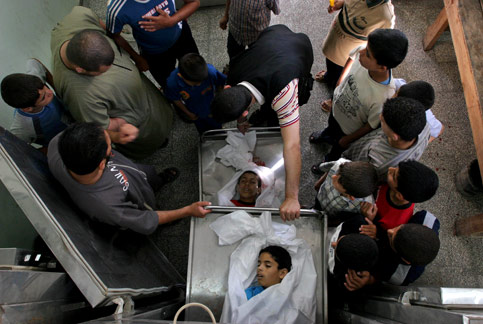 GAZA CITY, Gaza Strip (AP) - Israeli troops shot and killed two 13-year-old Palestinians near the Gaza-Israel border fence Friday, saying they were crawling toward the barrier in a ``suspicious manner.'' The boys had told their families they were going to the beach. (Guardian, June 1, 2007)

According to investigations conducted by PCHR:

At approximately 12:00 on Friday, 1 June 2007, an IOF infantry unit positioned on a wooden land in the northern Gaza Strip town of Beit Lahia, nearly 100 meters away from the beach, opened fire at four Palestinian children, who were playing with kites near the beach. Three children were wounded, whereas the fourth one was able to escape. Two of the children were left in the area bleeding to death. According to the third child who was wounded, 16-year-old Mohammed Ibrahim al-'Atawna, from Jabalya refugee camp, a kite fell near the area where IOF soldiers were hiding, and when they went to bring it, IOF soldiers opened fire at them. Soon after, the soldiers moved towards the children. They asked al-'Atwana, who was wounded by a gunshot to the back, about the condition of the other two children who were wounded by several gunshots throughout their bodies. He told them that the children were in a critical condition. They left the two children bleeding to death in the area and evacuated al-'Atawna to an Israeli hospital, where he had received medical treatment before he was transferred to a hospital in Beit Lahia. The two children who were killed were identified as:

Posted by Maurice Pinay at 9:00 PM

And this is the state for which America must perpetrate a war in the Middle East?