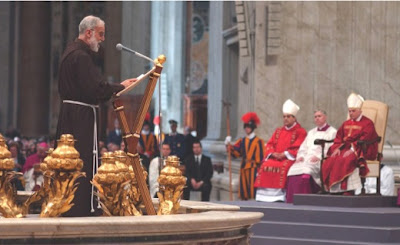 Throughout the centuries Good Friday was the main cultural context for misunderstanding of and hostility toward the Jews. It is therefore right that the work of reconciliation and “purification of memory “ begin on Good Friday. St. Paul offers this interpretation of the event of the Cross: “He himself is our peace, who has made both one, and has broken down the barrier of separation...to reconcile them both to God in one Body through the Cross, thereby putting to death the enmity...For through him we both have access by one Spirit to the Father.” (Eph 2:14-18) The two people referred to are, of course, the Jews and the gentiles.

This is a Satanic mockery of St. Paul's word's. In Ephesians 2:14-18 Paul is saying that Jews and Christians who have faith in Jesus have been reconciled in one body by a miracle of grace. Christians were not reconciled with unbelieving Jews by Christ's sacrifice, and certainly not with Talmudic Khazars, but this is what Benedict's household preacher would have us believe: the miracle of the cross is that believing Gentiles were reconciled in one body with the Pharisees who killed Christ and the Jews who called out for His blood, and later with Talmudic/Kabbalistic/Zionist/Communist Khazar spiritual heirs to the Pharisaic tradition. This is patent nonsense. Cantalamessa continues:

This prophetic vision of the apostle was greatly obscured by the events of life. In a second century C.E. Good Friday homily in Asia Minor, Melito of Sardis cast the first unnuanced accusation of deicide against the Jews: “What have you done, Israel? During your great feast you have killed your Lord. O listen, you descendents of the nations, and see. Your King is outraged. God is murdered...by the hand of Israel.” (About Easter, 73-96: Sch 123)

Here is another Satanic deception. Benedict's household preacher tells us that the "unnuanced" charge of decide originates in a recently found text of a sermon given by an obscure bishop, Melito of Sardis, in the second century "common era" and that Melito's sermon "obscured" the teaching of St. Paul. But I seem to recall that St. Paul himself made the charge of deicide in a quite blunt way:

"For you, brethren, are become followers of the churches of God that be in Jewry, in Christ JESUS: for you also have suffered the same things of your own lineage, as they also of the Jews, Who both killed our Lord JESUS, and the Prophets, and have persecuted us, and please not God, and are adversaries to all men, Prohibiting us to speak to the Gentiles that they may be saved, to make up their sins always. for the wrath of God is come upon them even to the end." (1 Thessalonians 2;13-15)

St. Paul is speaking here to mostly Greek and some Jewish converts at Thessalonica who were themselves being persecuted by Jews who rioted because Gentiles were being brought into the Church. These Jews whose hatred for Christ and converts to Christ (both Jewish and Gentile) which was so great that it manifested itself in violence (see Acts 17;5) were reconciled with Christian Gentiles into one body by the miracle of the cross? That's what Benedict's household preacher is telling us. Cantalamessa continues:

Already at the time of Melito the genre of the Improperia, or the Reproaches, was being developed through this anti-Jewish polemic. Later this genre was incorporated into the Latin liturgy of the adoration of the Cross. One by one God’s miraculous actions on behalf of Israel are enumerated and the ingratitude of the people is juxtaposed to each: “He delivered you out of Egypt, but you... He fed you with the manna in the desert, but you...”

It is true that in this and other similar texts much must be attributed to rhetoric, particularly to the polemical genre in vogue at the time. But the seed was planted and it left its mark in the liturgy (as in the infamous adjective used in the prayer for the Jews, which has now been abolished) ...

Cantalamessa continues to build up his calumnious fraud characterizing the Improperia from the Good Friday liturgy as being "developed through anti-Jewish polemic." He fails to mention that the "anti-Jewish polemic" was "developed" in the Old Testament by the Prophets Micah, Jeremiah and Isaiah!

O my people, what have I done to thee, or in what have I molested thee? answer thou me. For I brought thee up out of the land of Egypt, and delivered thee out of the house of slaves: and I sent before thy face Moses, and Aaron, and Mary. (Micah 6; 3-4)

And note that Cantalamessa can't even bring himself to speak the "infamous" word, perfidis which was removed from the traditional Latin Good Friday liturgy to temporarily please the so-called "Jews," just as he can't bring himself to speak the words, Anno Domini, preferring to use the kosher time reference, "Common Era" in its place. Cantalamessa is a kosher preacher in every regard.

... in art and even in folklore, all contributing to the negative stereotype of “the Jew”. The Byzantine icon of the crucifixion almost always shows two feminine figures at the foot of the cross. In some cases both are turned toward the Cross but, more frequently, one is looking at the Cross and the other has turned her back to it or is actually being forced away from the Cross by an angel. The figures represent the Church and the Synagogue – a representation contradicting Paul’s affirmation that Christ died on the Cross to unite the two realities, not to divide them.

As Pope John Paul II has noted, these developments left Christians less vigilant in our century when Nazi hatred was unleashed against the Jews. They served, indirectly, to facilitate the Shoah, the Holocaust. But long before this tragic ending, the polemics served to justify countless persecutions and much suffering inflicted upon the Jewish people by Christian nations and even by institutions of the Church.

And so Cantalamessa repeats his mockery of St. Paul's teaching claiming it's the destiny of Christian Gentiles to be one body with the synagogue and that failure to live up to this "prophetic vision" which he puts in the mouth of St. Paul has "served, indirectly, to facilitate" the Nazi "Holocaust" of the so-called "Jews."

Cantalemessa is building upon the fraudulent notion that Christian tradition was formulated out of an anti-Jewish polemic--a "teaching of contempt" which "paved the road to the 'Holocaust'," but as we have seen once again, the Christian tradition under attack for "anti-Jewishness" is actually Old Testament-based. The truth is precisely the opposite--Christianity is the one, true Biblical religion and Judaism was formed in reaction against it.

We're being told by Benedict's household preacher that we need to "reconcile" with a religion that was in reaction against the true faith even before its founders conspired against Christ and had Him crucified, later claiming in their Talmud that He deserved to be put to death. Cantalamessa acknowledged this himself in another sermon!

Benedict XVI's pontifical household preacher, Fr. Raniero Cantalamessa is telling us that Christ died so that we could be "reconciled" with the spiritual heirs to His murderers who maintain to this day that He deserved to be killed.

Thank you for bringing to light this idiocy.