Caribbean "Brothers in the Faith" Under Investigation for Child Trafficking, Sex Slavery 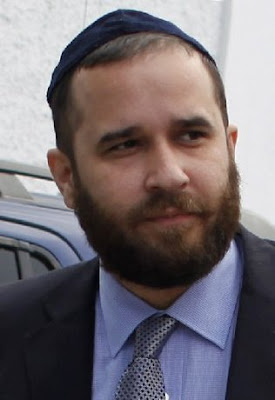 Jorge Puello [aka: Aaron Bentath]
"The report said the police had found documents connected to the Sephardic Jewish community in a house in San Salvador where the traffickers had held women."

Adviser to Detained Americans in Haiti Is Investigated

By MARC LACEY and IAN URBINA

PORT-AU-PRINCE, Haiti — The police in El Salvador have begun an investigation into whether a man suspected of leading a trafficking ring involving Central American and Caribbean women and girls is also a legal adviser to the Americans charged with trying to take 33 children out of Haiti without permission.

When the judge presiding over the Haitian case learned on Thursday of the investigation in El Salvador, he said he would begin his own inquiry of the adviser, a Dominican man who was in the judge’s chambers days before.

The inquiries are the latest twist in a politically charged case that is unfolding in the middle of an earthquake disaster zone. A lawyer for the group has already been dismissed after being accused of trying to offer bribes to get the 10 Americans out of jail.

The adviser, Jorge Puello, said in a telephone interview on Thursday that he had not engaged in any illegal activity in El Salvador and that he had never been in the country. He called it a case of mistaken identity. “I don’t have anything to do with El Salvador,” he said, suggesting that his name was as common in Latin America as John Smith is in the United States.

“There’s a Colombian drug dealer who was arrested with 25 IDs, and one of them had my name,” he said, not elaborating.

“Bring the proof,” he said when pressed about the child-trafficking accusations in the brief interview, which ended when he said he was entering an elevator. Reached later, he became angry and said he had broken no laws.

The 10 Americans have been imprisoned since Jan. 29 in the back of the same police station used by President René Préval as the seat of Haiti’s government since the earthquake. They had been told by their lawyers that at least some of them would be on their way home on Thursday. But the judge overseeing their case, Bernard Saint-Vil, recommended to the prosecutor that they be tentatively released from custody and permitted to leave the country as long as a representative stayed behind until the case was completed.

Mr. Puello has been acting as a spokesman and legal adviser in the Dominican Republic for some of the detainees.

The head of the Salvadoran border police, Commissioner Jorge Callejas, said in a telephone interview that he was investigating accusations that a man with a Dominican passport that identified him as Jorge Anibal Torres Puello led a human trafficking ring that recruited Dominican women and under-age Nicaraguan girls by offering them jobs and then putting them to work as prostitutes in El Salvador.

Mr. Puello said he did not even have a passport. When Mr. Callejas was shown a photograph taken in Haiti of Mr. Puello, Mr. Callejas said he thought it showed the man he was seeking. He said he would try to arrest Mr. Puello on suspicion of luring women into prostitution and taking explicit photographs of them that were then posted on Internet sites. “It’s him, the same beard and face,” Mr. Callejas said in an interview on Thursday. “It has to be him.”

Judge Saint-Vil also said he thought that the photo of the trafficking suspect in a Salvadoran police file appeared to be the same man he had met in court. He said he intended to begin his own investigation into whether a trafficking suspect had been working with the Americans detained in Haiti.

“I was skeptical of him because he arrived with four bodyguards, and I have never seen that from a lawyer,” the judge said in an interview. “I plan to get to the bottom of this right away.”

The judge said he would request assistance from the Department of Homeland Security to look into Mr. Puello’s background. A spokesman for the department said American officials were playing a supporting role in the investigation surrounding the Americans, providing “investigative support as requested.”

An Interpol arrest warrant has been issued for someone named Jorge Anibal Torres Puello, according to the police and public documents.

There were questions about whether Mr. Puello, the adviser, who said the Central Valley Baptist Church in Idaho had hired him to represent the Americans, was licensed to practice law. Records at the College of Lawyers in the Dominican Republic listed no one with his name.

Mr. Puello said he had a law license and was part of a 45-member law firm. But his office in Santo Domingo turned out to be a humble place, which could not possibly fit 45 lawyers. Mr. Puello’s brother Alejandro said that the firm had another office in the central business district, but he declined to provide an address.

Mr. Puello said in the interview that he had been representing the Americans free of charge because he was a religious man who commiserated with their situation. “I’m president of the Sephardic Jewish community in the Dominican Republic,” he said. “I help people in this kind of situation. We’re not going to charge these people a dime.”

Mr. Puello said that he had been born in Yonkers, N.Y., and that his mother was Dominican. He said that his full name was Jorge Puello and that he had no other names. But then in a subsequent interview he said his name was Jorge Aaron Bentath Puello. He said he was born in October 1976, and not in October 1977, which the police report indicates is the birth date of the suspect in the Salvadoran case.

The report said the police had found documents connected to the Sephardic Jewish community in a house in San Salvador where the traffickers had held women.

One wonders if Aaron Bentath was named after the High Priest of the slave trade, Aaron Lopez.

The centuries-old Judaic role in the slave trade in the Americas and the Caribbean is well documented:

Jews of the Black Holocaust
Posted by Maurice Pinay at 1:59 PM

Oy Vey !
Vat is all this ? you goyem have a problem with a little commercial enterprise ?


Go back to your xtian pews and turn your other cheeks , for we are your elder brethren as your pope has decreed .
So , your big bro's says your place is to be the sheep and we jews are to be your wolves . Get down on your knees xtian , for that's where you belong as we have our way with you and your children and your religion .

It is revealing to me how quickly this news disappeared off CNN.

I happened to be at a restaurant with the talmudvision tuned to CNN (audio off) when "BREAKING NEWS" flashed across the screen with images of the yarmulke-wearing "lawyer for Haitian missionaries" with captions alluding to his being suspected of sex slavery and child trafficking in El Salvador.

By the time I got back to my hotel, the "BREAKING NEWS" had already been spiked from CNN.