Zionist nuclear hypocrites are seeking sanctions and war against Iran, a nation that complies with the nuclear regulations that the Israelis violate. 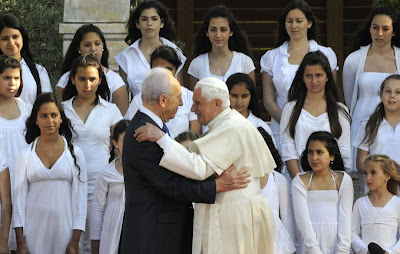 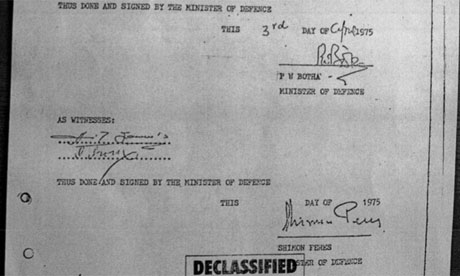 The "top secret" minutes of meetings between senior officials from the two countries in 1975 show that South Africa's defence minister, PW Botha, asked for the warheads and Shimon Peres, then Israel's defence minister and now its president, responded by offering them "in three sizes". The two men also signed a broad-ranging agreement governing military ties between the two countries that included a clause declaring that "the very existence of this agreement" was to remain secret.

The documents, uncovered by an American academic, Sasha Polakow-Suransky, in research for a book on the close relationship between the two countries, provide evidence that Israel has nuclear weapons despite its policy of "ambiguity" in neither confirming nor denying their existence.

The Israeli authorities tried to stop South Africa's post-apartheid government declassifying the documents at Polakow-Suransky's request and the revelations will be an embarrassment, particularly as this week's nuclear non-proliferation talks in New York focus on the Middle East.

They will also undermine Israel's attempts to suggest that, if it has nuclear weapons, it is a "responsible" power that would not misuse them, whereas countries such as Iran cannot be trusted.

South African documents show that the apartheid-era military wanted the missiles as a deterrent and for potential strikes against neighbouring states.

The documents show both sides met on 31 March 1975. Polakow-Suransky writes in his book published in the US this week, The Unspoken Alliance: Israel's secret alliance with apartheid South Africa. At the talks Israeli officials "formally offered to sell South Africa some of the nuclear-capable Jericho missiles in its arsenal".

Among those attending the meeting was the South African military chief of staff, Lieutenant General RF Armstrong. He immediately drew up a memo in which he laid out the benefits of South Africa obtaining the Jericho missiles but only if they were fitted with nuclear weapons.

The memo, marked "top secret" and dated the same day as the meeting with the Israelis, has previously been revealed but its context was not fully understood because it was not known to be directly linked to the Israeli offer on the same day and that it was the basis for a direct request to Israel. In it, Armstrong writes: "In considering the merits of a weapon system such as the one being offered, certain assumptions have been made: a) That the missiles will be armed with nuclear warheads manufactured in RSA (Republic of South Africa) or acquired elsewhere."

But South Africa was years from being able to build atomic weapons. A little more than two months later, on 4 June, Peres and Botha met in Zurich. By then the Jericho project had the codename Chalet.

The top secret minutes of the meeting record that: "Minister Botha expressed interest in a limited number of units of Chalet subject to the correct payload being available." The document then records: "Minister Peres said the correct payload was available in three sizes. Minister Botha expressed his appreciation and said that he would ask for advice." The "three sizes" are believed to refer to the conventional, chemical and nuclear weapons.

The use of a euphemism, the "correct payload", reflects Israeli sensitivity over the nuclear issue and would not have been used had it been referring to conventional weapons. It can also only have meant nuclear warheads as Armstrong's memorandum makes clear South Africa was interested in the Jericho missiles solely as a means of delivering nuclear weapons.

Botha did not go ahead with the deal in part because of the cost. In addition, any deal would have to have had final approval by Israel's prime minister and it is uncertain it would have been forthcoming.

South Africa eventually built its own nuclear bombs, albeit possibly with Israeli assistance. But the collaboration on military technology only grew over the following years. South Africa also provided much of the yellowcake uranium that Israel required to develop its weapons.

The documents confirm accounts by a former South African naval commander, Dieter Gerhardt – jailed in 1983 for spying for the Soviet Union. After his release with the collapse of apartheid, Gerhardt said there was an agreement between Israel and South Africa called Chalet which involved an offer by the Jewish state to arm eight Jericho missiles with "special warheads". Gerhardt said these were atomic bombs. But until now there has been no documentary evidence of the offer.

Some weeks before Peres made his offer of nuclear warheads to Botha, the two defence ministers signed a covert agreement governing the military alliance known as Secment. It was so secret that it included a denial of its own existence: "It is hereby expressly agreed that the very existence of this agreement... shall be secret and shall not be disclosed by either party".

The agreement also said that neither party could unilaterally renounce it.

The existence of Israel's nuclear weapons programme was revealed by Mordechai Vanunu to the Sunday Times in 1986. He provided photographs taken inside the Dimona nuclear site and gave detailed descriptions of the processes involved in producing part of the nuclear material but provided no written documentation.

Documents seized by Iranian students from the US embassy in Tehran after the 1979 revolution revealed the Shah expressed an interest to Israel in developing nuclear arms. But the South African documents offer confirmation Israel was in a position to arm Jericho missiles with nuclear warheads.

Israel pressured the present South African government not to declassify documents obtained by Polakow-Suransky. "The Israeli defence ministry tried to block my access to the Secment agreement on the grounds it was sensitive material, especially the signature and the date," he said. "The South Africans didn't seem to care; they blacked out a few lines and handed it over to me. The ANC government is not so worried about protecting the dirty laundry of the apartheid regime's old allies."

What about the nuclear weapons the warlike Israeli state has already in its possession?

... semi-annual consultation of the U.S. Conference of Catholic Bishops (USCCB) and the National Council of Synagogues (NCS), May 12, in New York. The consultation was co-chaired by Archbishop Timothy Dolan of New York and NCS Chairman Rabbi Alvin Berkun ...

Jewish and Catholic participants ... expressed grave concern about the Iranian government’s acquisition of nuclear weapons, a topic they said should be brought to the attention of congregations in both communities ...

Posted by Maurice Pinay at 12:00 AM No comments: Links to this post

Interview with Bp. Richard Williamson, London, 2010
Posted by Maurice Pinay at 12:49 AM No comments: Links to this post

You can have your 'Jesus' and Latin Mass as long as you don't interpret them to conflict with these principles. Understand?

From the Holy See press office:

VATICAN CITY, 4 MAY 2010 (VIS) - Benedict XVI has sent a message of congratulation to Elio Toaff, former rabbi of Rome, for his ninety-fifth birthday, which fell yesterday 3 May. The Message was read out by Msgr. Georg Gaenswein, personal secretary of the Pope, in the course of the inaugural ceremony of the Elio Toaff Foundation for Hebrew Culture.

"I think", the Holy Father writes, "using the expressions of the Psalm, how the Lord restored your soul, leading you along the right path, even through the darkest valley, at the time of the persecution and extermination of the Jewish People. The Lord, in His mysterious plans, wished you to have a unique experience of His salvation, becoming a sign of hope for the rebirth of many of your brothers and sisters.

"I am particularly happy to recall", the Pope adds, "your commitment to promoting fraternal relations between Catholics and Jews, and the sincere friendship that bound you to my venerated predecessor Pope John Paul II".

Posted by Maurice Pinay at 9:23 PM 11 comments: Links to this post