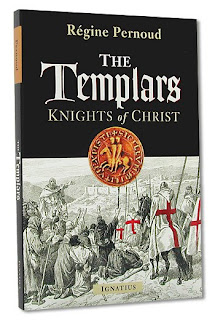 "The French historian Régine Peroud, who has already set right many of our misapprehensions about the Middle Ages. Now in The Templars she rehabilitates the devout Catholic knights, exposing ‘the incredible crop of fanciful allegations attributing to the Templars every kind of esoteric rite and belief, from the most ancient to the most vulgar. . . .’ As she rightly points out, the truth is accessible in archives and libraries: it is not impossible to uncover the facts. The result is an excellent, unadorned history that is a pleasure to read.”

Their actual crime was usury, of which they were undoubtedly guilty.

There is a British husband and wife team on the Catholic EWTN network who do a weekly series attempting to whitewash the Templars.

The Templars were the first international bankers in the West, the first to institutionalize homosexuality as a secret occult discipline (before the two headed eagle flag emerged as their symbol it was of two men astride a horse). Here you see two underground currents that have long afflicted the Roman Catholic Church, banker chicancery and homosexuality that were given an entire esoteric framework by the Knights Templars.

It is very important to the cryptocracy to revive the Templars. They are central to Freemasonic legend. The once powerful youth arm of Freemasonry was known as the "Order of Demolay.”

I suppose we should be appalled that the SSPX journal “Angelus” is involved in this operation of grotesque error and perversion, but I for one am not. After reading “Saint of the Sanhedrin” in the December, 2009 issue, rehabilitating Hillel the Pharisee, nothing the Angelus does shocks me.

I have my disagreements with Mr Hoffman but this is not one of them. There are 8 Bulls by Clement V condemning Templars and none of them has ever been overturned by a subsequent Pope. This case is closed and it should be noted that SSPX thinks that the anti-pope Benedict XVI(16) is somehow pope of the Catholic Church

It is very important to the cryptocracy to revive the Templars. They are central to Freemasonic legend.

This is what concerns me most here.

..."On the famous Friday October 13, in 1307, Philip the Fair, King of France, who was bankrupted by his wars against the Dutch, attacked and took over all of the Templar assets, commanderies and Temples. The state theft of the Templar assets occurred during this infamous one day, which is now celebrated in Western lore as a day of bad luck or Friday the 13th. Trumped up and extravagant charges were laid against the Order by the French despotic regime. None of them were of course true or even sensible. Philip needed the money and the Knights were a convenient target and the popular will was against them. In 1311 Pope Clement V dissolved the order and in Italy and France the Papacy and the French King divided the spoils. All of the Templars were tortured, and their leadership killed.
Thus ended the life of one of Europe's most important organizations. The value of Pernoud's work is that she debunks the fanciful allegations and claims of esoteric rites and beliefs which played such a prominent and calumnious role in the destruction of the Templars. As Pernoud relates the Templars were skilled at organization, war, finance, charity, and ethics. They were devout Christians who were certain that they were improving the world as God would ordain it. They were in many ways, far ahead of our modern men both in understanding, adroitness and knowledge. Any reading of Templar history would confirm that fact. And they indisputably helped save Western civilization. It is a pity that a caviling coward and mendacious traitor like Ridefort, was able in one single battle, to undo all of the Templars great efforts and achievements."

"Trumped up and extravagant charges were laid against the [Templar] Order by the French despotic regime."


When OTO tzadik, James Wasserman decided to churn up crusader nostalgia for a clash of civilizations where 'Israel' is the West's bulwark against 'Islamofascist barbarism,' he reprinted Thomas Keightley's, 1837 book Secret Societies of the Middle Ages. Ms. Pernoud on the other hand, is profiting from Thomas Keightley's thesis without mentioning him or his work. Coincidentally, the same thesis figures heavily into the three upper degrees of Scottish Rite Masonry.

What interests me here is the utility of the blaring Templar revival of recent years. The utility of Ms. Pernoud's book can be seen in the review you quote: "[The Templars] indisputably helped save Western civilization."

Western civilization is not something that can be saved by the military industrial complex and international banking. The Gospel is what will save us, and it teaches that avarice is the root of ALL evil.

My understanding is that they are all condemnations as opposed to the one Bull against Jesuits which was only a suppression; there are no specific allegations in Domincus ac Redeptor

The Templars at first were living according to the Gospel, at least in the time of St. Bernard. But then all that mess you mention happened as they got more powerful, and forgot the Gospel.

I'm afraid St. Bernard was guided more by mysticism than the Gospel.

I've just read those comments and I'm afraid Mr Hoffman is actually mistaking, Templars have nothing to do with homosexuality. The 2 men riding a single horse is a symbol of when the very firsts 9 templars came back to France. 2 of them had to ride the same horse as one died during the trip back.