These are segments of an article which originally appeared at Opus Dei's official website in 2002. It's has since been removed but is still available in the web archive, Wayback Machine: 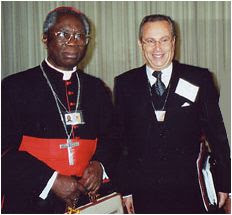 "Many of Josemaria Escriva's concepts call to mind the Talmudic tradition and reveal his profound knowledge of the Jewish world, as well as his passionate love, as he openly repeated, for two Jews, Jesus and Mary," said Rabbi Kreiman. "Moreover, that which most likens (Escriva's) teachings to Judaism is the vocation of man to serve God through creative work, perfecting creation [The Kabbalist doctrine, Tikkun Olam--"repair of the world"] every day, through perfection of work" ...

The Rabbi, who is a Cooperator of Opus Dei, said he wanted to demonstrate his special affection for the organization founded by Josemaria Escriva. "Opus Dei members helped me, right from the beginning of my [rabbinic] seminary studies, to persevere in my [rabbinic] vocation," he said, "and I have also seen them do it with other rabbis, for which I am deeply grateful."

This same Opus Dei formed rabbi, Angel Kreiman, announced in Oct 2005 that, "Forty years after 'Nostra Aetate' we are entering a promised land, in which for Catholic bishops and priests, preaching, the teaching of Jesus' Judaism, and of the Judaism of Peter and Paul, of the apostles, of the Jewish life of the first Christians, is a theological foundation."

Putting aside the fact that the Judaism rabbi Kreiman speaks of is the Pharisaic doctrine which Christ condemned and told His disciples to beware of, one must ask, what is this "promised land" that Rabbi Kreiman believes we are entering, and who promised it for that matter?

The Opus Dei formed rabbi goes on to say:

"Both relations between Jews and Catholics, as well as relations between the Holy See and Israel, have increased so much. On the Christian side, I think the only limitation has been to indicate the dialogue with Jews as important but not urgent. Now, it is clear that the dialogue with Jews is not an option but an obligation. It is for Catholic people to accept the Jewish people as the original alliance" [???] ...

"For observant rabbis it is time to begin to think that the Church is not an enemy of Israel, but its best ally" ...

"... it is not only about saying that Christians and Jews are friends, that Jews are not accused of deicide; it must be said that Judaism and Christianity are the foundation of the struggle against paganism."

I disagree. What truly must be said is that the rabbis are attempting to drag Christianity back to the paganism of Babylon and Egypt which they have preserved within their tradition of Judaism to this very day. That is the work which Opus Dei is engaged in.

Posted by Maurice Pinay at 2:41 PM

It causes me to wonder: what in the blazes is going on with the Neo-Catechumenal Way? If the Opie-Doppies are crypo-Talmudists, then are the PU-Cats crypto-Qabalahists? I think I need to go back and re-read 'Nostra Aetate' I don't recall this degree of liberality - definite universallist overtones but a wholesale adoption of the condemned "traditions of the fathers" I don't recall. It seems the farther we get (in time) from the second Vatican council the more it stinks.

Again, the 'Jews', a Turkic tribe
that learned the Talmud from rabbis
in Babylon in the 8th century, and
later became the Russian/Ashkenazi Jews, who have caused so much trouble & chaos for Christendom claim that Jesus & Mary were 'Jews'...more lies from the
descendents of the 'father of lies
& murcer'.....Michael Mantra