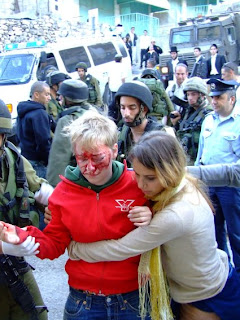 
We are confronted by around 100 ultra-orthodox Jews, who are gathered in Hebron to mark ‘Hebron day’, one of whom shouts “You know that Jesus is gay?”. None of us really react to this arbitrary taunt, however it does serve to focus the crowd’s attentions squarely on our small group of human rights workers. Another shouts “What are you doing here?”

“Tourists” I reply, believing this to be the safest response under the circumstances. The crowd then begins chanting in Hebrew “We killed Jesus, we’ll kill you too!” — we are quickly designated the ‘other’. The mob mentality takes on an oppressive and ugly turn; now almost a single entity justifying almost any excess as long as it is directed towards the ‘other’. The crowd edges forward “You love Palestinians” one of them shouts, spitting in a human rights worker’s face.

The first stone had been cast: saliva rains down on us and people jump above one another to be able to deliver their contempt. We are shoved and kicked repeatedly, and even though it is apparent that events are spiraling dangerously out of control, the soldiers who are standing just a few feet behind us at the checkpoint choose to look on impotently as the attacks intensify.

A man lunges from the crowd, smashing Tove, a 19 year old Swedish girl across the face with a bottle. She immediately collapses to the ground clutching her bloodied face in horrified terror. At this point the soldiers come forward and motion at the settlers, in a “ok… that’s enough guys…” motion, amid clapping, cheering and chanting from the crowd.

As Tove lay on the hard concrete floor, blood oozing from her wounds the crowd re-groups, fed by curiosity and growing in energy “We killed Jesus, we’ll kill you too!” I now felt a growing sense of apprehension as awareness dawned of the mob’s evil intent and the soldiers’ unwillingness to intervene in any meaningful way.

A religiously dressed Orthodox Jew then adds insult to injury by posing with a thumbs-up gesture over Tove’s bloodied face. The sight of this was so obnoxiously contemptuous I never gave the guy the satisfaction he sadistically craved by taking his picture. The decision as to whether I should have taken that picture has been discussed over and over by people I know, though I feel the impact of sharing that disgusting image I have etched in my mind, can serve no purpose other than that of breeding hatred.

Posted by Maurice Pinay at 6:10 PM

simply atrocious. this clearly serves to illustrate the necessity of cutting all ties to these people and allow them to fend for themselves...something which should've been done ages ago. these are the people whom our our "christian leaders" refer to as "elder brothers in the faith." perhaps when one of their own children are assaulted they'll have a different opinion. this is outrageous!

the united states needs to IMMEDIATELY freeze all taxpayer
payments to Israel, whether in the
form of loans or grants...all military assistance should be frozen, until their is an agreement
to either grant the Palestinians an
independent stae on the West Bank, or make the whole of Israel/Pales-
tine a unified democratic state, instead of a theocracy...Jerusalem
should be under the supervision of
a joint commission of the three re-
ligions (Islam, Christianity & Judaism)...also, the United States
military should maintain a 24/7
surveillance of all IDF/Israeli
military assets (particularly their
submarines w/nuclear cruise missles), with the intent of destroying these assets if the Israelis initiate any provocations
toward an attack on Iran or any other nation...also, Israeli should be brought into full compliance w/international nuclear
regulatory agencies as regards their nuclear program/arsenal...if
they do not comply, then we begin economic sanctions...various Israeli officials have made implied
threats of nuclear attack against
both European & Russian targets...
we know thay have already hit us...........Michael Mantra


I agree with you but we could only do this if our country was our own---however it is not. America must break this Israeli hold or else we may as well abandon our country.

i wonder how many of these acts have been made known to the church? apparently the young yeshiva students are notorious for spitting on the clergy in jerusalem neighborhoods and there have been physical assaults on the clergy as well. if the victims (priests and monks) have made it know to their superiors and nothing has been done to address this...shame on the church.

imagine if this behavior was directed at the american jewish exchange students during one of their trips with a palestinian as the perp.

I found your blog from a recommendation by Michael A. Hoffman. Can you recommend other reliable websites dealing with Judaism?

I think Maurice would recommend

the real horror about this is the
religious hatred involved...Hebron
is/has been a flashpoint for Talmudic hatred...it is the site of
the 'tomb' of Abraham, who is a Patriarch of Islam, Judaism & Christianity...some of the most violent of the illegal settlers live in communities surrounding the city...Hebron has been divided 'Berlin style' to pre-
vent Muslims from going to the
Mosque of the Patriarch...what does
the Vatican have to say about all of this?...the sound of silence.

Leviticus 19:24 But the stranger that dwells with you shall be to you as one born among you, and you shall love him as yourself; for you were strangers in the land of Egypt: I am the LORD your God. They need to read The Old Testament ,or perhaps they prefer the the Talmud.

Do you know that not only Orthodox are part of the radical settler movement. I have seen settlers, same persons on separate occasions acting and speaking in their superior haughtiness about the growing settlements and the fact that there hasn't been talk in Israel among serious people for a very long time about two-states. Have seen these same people in haughty glory gallivant into "al-Aqsa"/Temple Mount reminding Palestinians that they have no right to anything.