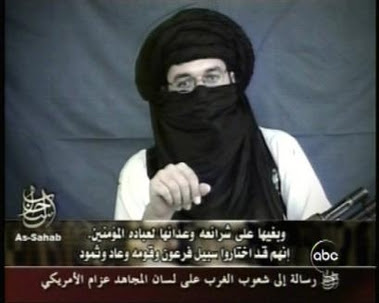 CAIRO, Egypt -- An American member of al-Qaida warned President Bush on Tuesday to end U.S. involvement in all Muslim lands or face an attack worse than the Sept. 11 suicide assault, according to a new videotape.

Wearing a white robe and a turban, Adam Yehiye Gadahn, who also goes by the name Azzam al-Amriki, said al-Qaida would not negotiate on its demands.

The above referenced "American" member of "al Qaeda" is the grandson of an ADL board member named Carl Pearlman who he lived with as a teenager.

Sometimes Adam would visit his paternal grandparents, Carl and Agnes Pearlman, in Santa Ana, where he would swim with neighborhood children and family friends. Carl Pearlman was a respected urologist, a patron of the arts, and a board member of the Anti-Defamation League ... In June, 1995, when [Adam] was sixteen, he left [his parents'] farm to live with his grandparents in Santa Ana.

It was during Adam's stay with his ADL board member grandfather that he decided to "convert" to Islam [see: "Holy Apostasy" ala Sabbatai Zvi, Jacob Frank]. He joined a local Mosque which was run by a man who "reached out" to Judaic organizations which prompted conservative Muslims suspicious of him to call him "Danny the Jew."

While living with his grandparents in suburban Santa Ana, [Adam] made his first trip to the nearby mosque in 1995.

"He was here every day, all day," [Haitham] Bundakji recalled. "He performed the five daily prayers here."

[Adam] even asked Bundakji for a job at the mosque and soon began working as a security guard ...

As mosque chairman, Bundakji emerged as a particular target of [conservative Muslims'] wrath. They criticized him for wearing Western clothes, for not wearing a beard, for trying to reach out to local Jewish communities. Seizing on his American nickname, Danny, they circulated fliers around the mosque calling him "Danny the Jew."

Adam's father, and son of an ADL board member, changed his surname from Pearlman to Gadahn which he says is a variation of the Biblical name of Gideon who caused Israel's enemies to turn their swords against each other.

Like Adam, Phil Gadahn had taken on a new name and identity as a young man. He was born Philip Pearlman, the son of a prosperous Jewish physician ...


... He decided to make a fresh start. Gadahn told the Register in 2004 that his new surname was a variation of the biblical name Gideon, who was a Jewish hero from the Old Testament ...

Adam's father gave him the middle name, Yahya after John the Baptist, the prophet who heralded the coming of the Messiah.

"Phil and Jennifer Gadahn were living in Oregon when Adam, their first child, was born. They gave him the middle name Yahiye, after the Arabic name for John the Baptist ..."

[Adam] introduced himself [to members of the the Mosque] as Yahya -- the Arabic name for John the Baptist, revered as a great prophet in Islam.

Now, this grandson of an ADL board member is transformed into a key representative of the "Islamofascist threat," a "prophet" of a future 9-11 style attack which Judaic players of the other side of the Kabbalistic dialectic, Netanyahu, Krauthammer, Kristol, Podhoretz, et al, are pushing the U.S. military to preempt. This, in reality, is a proxy war for Israeli dominion in the Middle East--fought by U.S. soldiers and paid for by the U.S. taxpayer--which is causing unprecedented hatred worldwide for the United States. U.S. Secretary of State Condoleeza Rice has referred to it as "birth pangs" of a new Middle East--transparent Messianic language. "Israel's" enemies of the formerly Christian West and "Israel's" Muslim enemies in the East turn their swords against each other in a counterfeit mockery of the book of Judges, not by the hand of God, but by the machinations of Judaics who are their own gods.
Posted by Maurice Pinay at 1:47 PM

Good point about Zionist double-agents operating Al-Qaeda as a US goverment front.

Before the internet, I have no idea how people could in any way get a handle on the reachery and treason being perpetrated against the nation at the level of the proxy 'terrorist' threat.

As the Illuminists once mocked God - if he didn't exist we would have to invent him. Well hasn't the worm turned. The Illuminist neo-Jacobins and Revolutionaries who have substituted a Zionist Occupied Decepticon (ZOD) over the American people if they hadn't been providential enough in the 1990's to create Al-Qaeda would certainly have to do so now. But they are so arrogant and secure in their power, they can openly mock the nation with this crass stunt by an ADL Decepticon and his 'Islamofascist' threat.

The real threat of the Illuminist financial empire is very real, however. As patriotic Americians increasingly 'get their number', the masks will come off and the mirror will splinter and they will reveal themselves as the real enemies of the state. The ones who in fact own the nation. Will this be a good thing? or will people look back to the good old days of the proxies and the 'Islamofascist' threats?