Where are the CNN documentaries; the global outrage and intervention programs for liberating Orthodox Judaic women from this tyrannical, backwards racket? Is Judaic degradation of women somehow less reprehensible than that of the Taliban? I say much more so. Meat from the butcher or fish from the fishmonger--that's the status of the woman in Orthodox Judaism (Babylonian Talmud, tractate Nedarim 20b).

Five assailants believed to be Ultra-Orthodox Jews assaulted a woman and an Israel Defense Forces soldier Sunday for sitting next to each other on a bus bound for Beit Shemesh, near Jerusalem.

The incident began when the five men asked the religious woman to move to the back of the bus to prevent males and females from sitting together in public. When she refused, they beat her and the male soldier who sat next to her.

Police forces that arrived at the scene to arrest the men were attacked by dozens of ultra-Orthodox men who punctured the tires of their vehicles, allowing the assailants to escape.

This is not an isolated incident: 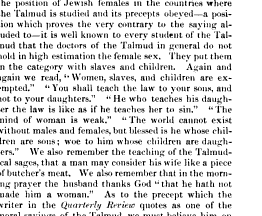 Cyclopaedia of Biblical, Theological, and Ecclesiastical Literature By John McClintock
Posted by Maurice Pinay at 5:02 PM

It would be good to take a look at some blogs by some apparently Orthodox women who *love* their role as *loving* wives and mothers in Orthodox Judaism.

The Author of this blog, a certain "Anna" [http://ccostello.blogspot.com/] (according to herself born out of wedlock) as she claims, lived in the USSR till the age of nine (9) and then moved to *beloved* Israel with her mother and now considers herself a complete Israeli by birth. Being a secular Jew according to her own testimony and seeing the wickedness of the secular life, little by little she embraced *orthodox Judaism*, converted and married an orthodox Jew and now has a *beautiful* daughter.(what an absolutely beautiful real-life novel!!!)

The strange thing about her is her *more than complete*, absolute mastery of the English language. She uses numerous phrases which can only be known to native speakers of English (being in contact with non-native English speakers who live in English speaking countries I was absolutely amazed to see this.

The interesting thing is that None of her readers ( who are numerous) who are almost 100% Americans!!!! with a few exceptions from other countries, ever for a single moment *doubt* her words or her identity!!!

Many, many of her readers are Christians (Catholics among them) who continue to praise her for her achievements and almost always chime in with her *carefully* woven *net* of anti-Palestinian propaganda.

Even though she claims that her blog is one *completely* devoted to *home matters* she sprinkles her writings with Pro-zionist, Pro-israeli, anti-Palestinian, even anti-Christian venom by calling her readers "dear ladies!!!" and her readers agree with her on everything! Wishing Israel good luck in its war against defenseless, Gazan *terror*

In one of her recent posts she practices a very wicked, sly method of defending *precious* Israel and attacking Palestinians, with a clever analogy from her *fish aquarium*.

How very interesting that this little post (After a refreshing weekend...) http://ccostello.blogspot.com/2009/05/after-refreshing-weekend.html
has so much in common with what the Israelis think of the Palestinians (greedy black terrors, terrorizing the-Fish- Israelis!!!) and what a good solution!! really!
*isolate* him (them) to keep *peace* and *balance* in the aquarium (Israel or the world)!!!

wow everything fits in perfectly well!! ( just as do many many other instances in her *innocent* blog)


hiding behind the mask of an *innocent*, *loving*, *mother* and housewife, writing about *simple* chores, but at the same time injecting her propaganda(Zionist, Israeli) venom into the minds of her cleverly brainwashed reader.

I would highly recommend a look at her blog.

I hope that one day someone will be able to prove her lies and deceptions and save all those *unaware*, *naive* readers from around the world (especially the Americans) from falling into her endless pit of fire.