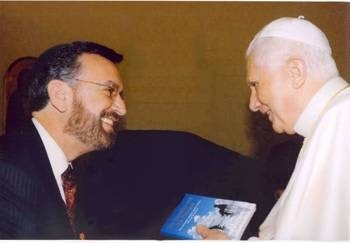 Rabbi Rosen Presents his Gospel mocking book to Benedict XVI
Christ called the Pharisees "children of hell." But what did He know ... Note that this man, Rabbi David Rosen who happily identifies himself as a Pharisee, also has had the title "papal knight" bestowed upon him by Benedict XVI. And note that Rabbi David Rosen is one of the signers of the document produced by the joint committee of the Papal Commission for Religious Relations with the Jews and the Chief Rabbinate of "Israel" which claims a Biblical basis for the Talmudic "Noahide Laws" documented HERE.

... [Rabbi David] Rosen kept talking about Pharisees in a complimentary way. Kendall finally said, "Rabbi Rosen, I almost get the impression that you're a Pharisee and proud of it." Rosen replied, "You're exactly right!" That led to more conversations, and a book ...

Rosen: My hope would be that Christians would associate Pharisee with a good Jew, one who lives in the sense of the divine presence and seeks to fulfill the divine Word and will in his or her daily life. But I think we've got too many centuries of negative indoctrination.

... I believe that Jesus was a Pharisee who knew that there were wonderful Pharisees around, probably the majority, but there were some who were actually desecrating the name, the message, and the tradition they were meant to be the custodians of.

And dear Rabbi Rosen, ... excuse me, dear Pharisee Rosen, I seem to recall that it was precisely the Pharisaic tradition itself that Christ condemned so repeatedly and so harshly; the tradition which He said makes void the Word of God which the Pharisees should have been the custodians of but were not; the tradition that you uphold and which you disingenuously attempt to makeover. You may as well attempt to sell me on the notion that the sky is red, or that 2+2=3, or that rabbis are honest men of good will ...

The Vatican's Knight Defenders of the Talmud

AJC Welcomes Vatican Clarification
Posted by Maurice Pinay at 3:01 AM

Rosen has also laid out the conditions for accepting the SSPX (source):

"I trust the statement of Cardinal Kurt Koch, President of the Pontifical Council for Christian Unity, that the acceptance of Nostra Aetate as binding would have to be a requirement for the Society of Saint Pius X before its members could be formally embraced by Holy See; and I find it impossible to believe that Pope Francis would expect anything less.

"However in addition to accepting the Magisterium’s teaching regarding the Jewish People and Judaism, I would hope that the Holy See would insist on a repudiation of the Antisemitism that has been part of the culture of the Society of Saint Pius X. It was not just Bishop Williamson and one or two others, but the websites of the organization in the past have been replete with anti-Jewish rhetoric. I would hope that there would be some formal acknowledgement of Pope Francis’ statement, in keeping with those of his predecessors, that it is impossible to be a true Christian and hold anti-Semitic views."