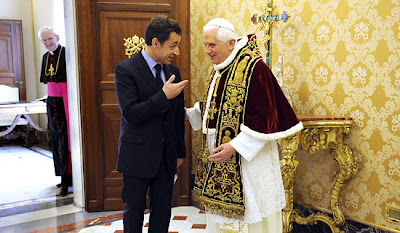 Read the joint Vatican-Chief Rabbinate of "Israel" document which claims that the talmudic "Noahide Laws" have a biblical basis and suggests that they apply to Christians:

I would like to request that you encourage readers to support Michael Hoffman in his efforts to finish his book on Judaism. His funds are stretched and he is close to finishing.

Let me take a minute to wish you a Merry Christmas...now, I have comments & criticism...This recent visit of Sarkozy to the Vatican was
really no big news...Sarkozy claims to be a Roman Catholic, and maybe he is, but his background is Jewish, both of the Khazar & Donmeh
variety...the French publication Le Figaro also did a series of articles indicating that Sarkozy has worked closely with the Mossad...now, my complaint was that
Sarkozy is in the midst of a second divorce, but a Cardinal I saw on TV addressed the issue by saying, '...the Church has no comment on the matter, as it has been reported widely already.'...OK, this is just politics, but that is one of the problems with the Church, that it is too engaged in 'politics'...the duty of Christians, as I see it, is to take moral positions, and not worry about politics...and, also, it is the mission of the Church to glorify the name of Jesus Christ...my criticism of the blog is this: I would like to see more positive thrust as to how the Church can reach more young people,
as Jesus did say it was important to 'discern the signs of the times'...the Vatican & much of the Church hierarchy have succumbed to
Pharisism, in it's most universal form, i.e., obsessed with ritual that negates the Word of God...I realize that your blog is mainly concerned with the 'Judaization' of the Church, and it is very informative on this topic, but let's forget our 'elder brothers'for a moment:
they will do what they will do, and the best weapon we have in that battle is Jesus Christ and His teachings...I say this as one who falls very short in this regard, but I have my faith and will endeavor to 'endure until the end'...so, maybe, some articles about Catholics who are attempting to bring the Church into the 21st Century, in line with Christ's teachings...Peace.