Son of Cain: A Phoenix Rising 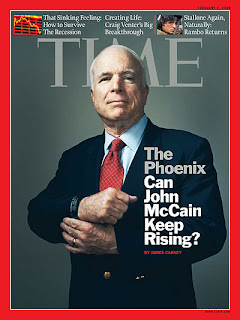 John McCain has taken the Republican presidential nomination. This has occurred simultaneously with reports surfacing of McCain's connection to the Bronfman crime syndicate via his marriage into the Hensley family.

This is a Truth or Consequences dare. A sane populace would be outraged by the news that this "honest," "Christian," "hero" is in fact a mob-backed scoundrel. They would have been outraged at McCain's patent obeisance to the Zionist state long ago. As president, this mob-backed beer merchant Zionist would make the Skull and Bones Zionist, George W. Bush look like a class act.

McCain means literally, Son of Cain. In the rabbinic tradition Cain is said to be the product of Eve copulating with the serpent in the Garden of Eden. Cain's son was Enoch of whom many occult traditions exist including an association with the Kabbalistic "angel" "Metatron." Rabbinic tradition holds that Enoch/"Metatron" taught the "oral tradition" (i.e. Talmud, Kabbalah) and the "secrets" of the "written Torah" (i.e. Old Testament) to the prophets. "Metatron" is the "Knower of Secrets" according to the rabbis. The rabbis claim Enoch was "reborn" as "Metatron." Time magazine (founded by Skull and Bones member, Henry Luce) likens John McCain to a Phoenix, a mythical bird which self-immolates and is reborn in a new form.

The U.S. is immolating and being "reborn" as a Talmudic/Zionist cesspool. This truth is being revealed to us. If we continue to offer no resistance to it we, rather than the Zionists, can expect to suffer the consequences. 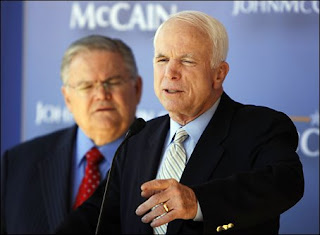 McCain is identified as Episcopalian, so in what way can he be "Catholic"?

Thank you for that correction.

Is McCain striking a pose on Time`s cover as "Most Worshipful Master", or modeling an Italian suit for a Jewish men`s store? Is the cue one and the same, or take your pick?
a

There are two Enochs in the Bible. One Enoch was a son of Cain, which you mention. But I've always read that the Enoch who was Metatron was the Enoch descended from Seth.
E.g., http://en.wikipedia.org/wiki/Enoch

Is there some Kabbalistic tradition that makes Metatron the Enoch of Cain? That wouldn't surprise me, but I would like to have the reference if you have it.

Is there some Kabbalistic tradition that makes Metatron the Enoch of Cain? That wouldn't surprise me, but I would like to have the reference if you have it.

Theosophy conflates the biblical Enochs together. I am almost certain that I had identified a Kabbalistic basis for this idea, but I can't recall where. I've corrected the entry to read that there are "occult" traditions which associate Enoch son of Cain with Metatron. I apologize for any confusion caused.

Enoch, Onech hanoch (Hebrew) Initiation or initiated; hence also hierophant. In the Bible (Genesis 4, 5), "there are three distinct Enochs -- the son of Cain, the son of Seth, and the son of Jared; but they are all identical, and two of them are mentioned for the purposes of misleading. The years of only the last two are given, the first one being left without further notice." He is the great grandfather of Noah, and stands for the first subrace of the fifth root-race (BCW 14:86&n).

The prophet Enoch, supposed to have been an antediluvian, was the inventor of learning, letters, and the founder of initiatory rites. Among the Arabs Enoch is commonly called Idris, meaning the wise or learned. Again, "The Kerkes and the Onech stand for a race cycle, and the mystical tree Ababel -- the 'Father Tree' in the Kuran -- shoots out new branches and vegetation at every resurrection of the Kerkes or Phoenix" (SD 2:617). The connection with the phoenix is purely mystical, because just as the phoenix is said to be reborn from its own ashes, thus bringing about a new cycle, so the neophyte during initiation is said to be reborn from the "ashes" of his past self.

As you can see, this Theosophist glossary also conflates Enoch with Enos, son of Seth.