During the ADL reward ceremony Keeler made reference to an ADL program with a typically Orwellian title, "Bearing Witness," praising the program and thanking the ADL for it. For background on this ADL program of subversion of Catholic schools, read the following: 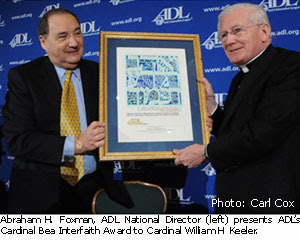 ADL Honors Cardinal Keeler For His Leadership In Catholic-Jewish Relations

Washington, D.C., April 14, 2008 … The Anti-Defamation League (ADL) today honored William Cardinal Keeler with the ADL Cardinal Bea Interfaith Award in recognition of his enduring work in repairing the Catholic Church's relations with the Jewish people and for promoting Catholic-Jewish dialogue and partnerships.

"Cardinal Keeler has been at the epicenter of Catholic-Jewish relations since the historic changes brought about during the Second Vatican Council and the adoption of Nostra Aetate," said Abraham H. Foxman, ADL National Director, in presenting the award. "For the past 44 years, Cardinal Keeler has been instrumental in building and deepening the new positive relationship between Catholics and Jews in the United States and around the world. He is truly a world leader in building human bridges of respect and understanding between our two faith communities."

In accepting the award, Cardinal Keeler thanked ADL for its work in interfaith relations, including the League's Bearing Witness™ Program, which brings together educators from Catholic schools to learn about anti-Semitism and the Holocaust and how to teach those lessons to young people. "You should be very proud of what Bearing Witness is doing, not only in my hometown of Baltimore, but also throughout the country and around the world," said Cardinal Keeler.

Ordained a Catholic priest in 1955, Cardinal Keeler was appointed Special Advisor to Pope John XXIII during the Second Vatican Council, in which the Church discussed and deliberated on its relationship to the Jewish people. The result was the historic document, Nostra Aetate, which repudiates the centuries-old "deicide" charge against all Jews, stresses the religious bond shared by Jews and Catholics and reaffirms the eternal covenant between God and the People of Israel.

Appointed Archbishop of Baltimore by Pope John Paul II in 1989, Cardinal Keeler was named to the College of Cardinals in 1994. As President of the United States Conference of Catholic Bishops, he was instrumental in building interfaith bonds and addressed issues involving all Christian faiths and Jews.

During Pope John Paul II's 1987 trip to the United States, Cardinal Keeler initiated a meeting between the Pope and Jewish leaders, and organized a first-ever interfaith ceremony in the United States involving Jews, Muslims, Hindus, Buddhists and the Pope in Los Angeles.

An acknowledged leader within the Roman Catholic Church for promoting its positions on inter-religious dialogue, Cardinal Keeler is admired by Jewish leaders for his integrity, honesty and tireless efforts at building interfaith dialogue.

The inscription on the award reads: "ADL Cardinal Bea Award presented to William Cardinal Keeler in appreciation for your distinguished service in promoting positive relations between the Jewish and Catholic communities and for fostering mutual understanding between faiths."

The ADL Cardinal Bea Interfaith Award was established to perpetuate the memory of Cardinal Bea, the enlightened German Jesuit scholar who deepened and enriched relations between Catholics and Jews. Cardinal Bea's efforts made possible the positive statement of Vatican Council II on Jews and Judaism. Past recipients of the award include John Cardinal O'Connor, Archbishop of New York; the Most Rev. Francis John Mugavero, Archbishop of Brooklyn; Archbishop Justin Cardinal Rigali of St. Louis, Archbishop Adam Cardinal Maida of Detroit; and Bishop James W. Malone of Youngstown, Ohio.

Posted by Maurice Pinay at 5:57 PM