Tuesday, April 15th 2008 was not only the day of the arrival of Pope Benedict XVI in the U.S., it was also "Education Day" U.S.A., the day on which the U.S. President honors the Chabad Lubavitch Rebbe, Menachem Mendel Schneerson on his birthday according to the Hebrew calendar (Nisan 11) each year since the presidency of Jimmy Carter. Schneerson was believed to be the Messiah by Chabad Lubavitchers during his lifetime and continues to be considered so by many of them even 14 years after his death in 1994. The Chabad Lubavitch carry on the evangelical tradition of their dead Rebbe, Menachem Mendel Schneerson, drawing Judaic persons who've distanced themselves from the tyranny and superstition of Orthodox Judaism back to those dark traditions and cajoling the Goyim into accepting the Talmudic system of double-standards, the "Noahide Laws," as a replacement for their traditional, universal, one-standard-for-all based upon the Biblical 10 Commandments and Christ's Sermon on the Mount.

On "Education Day" 1991, George Bush Sr. made explicit reference to the topic of "education" that this day represents. Bush signed into law a proclamation stating that the Talmudic "Noahide Laws" are the "basis of civilized society and upon which our great Nation was founded;" the "ethical values and principles [which] have been the bedrock of society from the dawn of civilization, when they were known as the Seven Noahide Laws;" and "without these ethical values and principles the edifice of civilization stands in serious peril of returning to chaos;" and that "in tribute to this great spiritual leader, `the rebbe' [Menachem Mendel Schneerson], this, his ninetieth year will be seen as one of `education and giving', the year in which we turn to education and charity to return the world to the moral and ethical values contained in the Seven Noahide Laws;" and that "the Lubavitch movement has fostered and promoted these ethical values and principles throughout the world ..."

I highly recommend reading this Orwellian Public Law which Bush Sr. signed in 1991, Public Law 102-14, H.J. Res 104, which attempts to retroactively establish the barbaric Talmudic "Noahide Laws," rather than the Bible, as the basis of civilization, at the Library of Congress website: 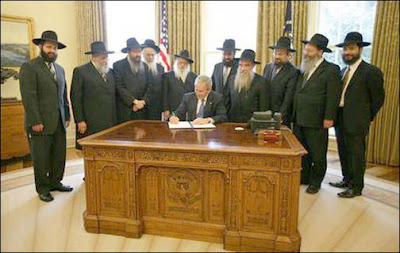 With Chabad rabbis from across the world looking on, President George W. Bush signs a presidential proclamation Tuesday, April 15, 2008 in honor of "Education and Sharing Day," and highlighting the work of the Chabad Lubavitch movement. Since 1978, every president has signed an "Education and Sharing Day" proclamation. Rabbi Yerachmiel Gorelick of Fort Collins is on the far left.

Fort Collins Rabbi Yerachmiel Gorelick was among 10 Chabad rabbis from around the world chosen to meet Tuesday with President Bush in the Oval Office.

Gorelick said Bush spoke about his support of Israel, his experiences in the White House and other topics during the brief meeting ...

The president signed a proclamation marking Education and Sharing Day, an annual commemoration of the work done by the Chabad Lubavitch movement in Judaism. The commemoration is tied to the birthday of Rabbi Menachem M. Schneerson, the Lubavitcher rebbe or spiritual leader who died in 1994,

Gorelick, 32, said he was told he was picked because he's a young leader, as exemplified by his efforts to get a menorah included in Fort Collins' official holiday display.

He presented Bush a menorah during the Oval Office visit.

"He was extremely candid and very relaxed," Gorelick said of the meeting with Bush, which came just hours before the president greeted Pope Benedict XVI on his first visit to the United States.

Bush's meeting with the rabbis coincided with former President Jimmy Carter's meetings with leaders of Hamas, the Palestinian group viewed as terrorists by the Bush administration and other U.S. leaders.

When asked if the Carter-Hamas meeting was discussed during the rabbis' visit to the White House, Gorelick said it was but he declined to elaborate.

Gorelick said he was told Friday that he'd been selected to meet with Bush but was sworn to secrecy until the meeting was over.

"I didn't even know where I was going to stay when I arrived here," he said as he prepared to leave Washington, D.C., on Tuesday afternoon.

Orthodox Judaism, the non-Biblical, tyrannical system of double-standards, has one preferential religious and legal system for the so-called "Jews" and a lower-tier system of tyranny for the "Goyim," which is to say, everyone else. According to the rabbis, the Goyim are forbidden to even read the Bible and should be executed for doing so. They should only concern themselves with observing the "Noahide Laws" as Maimonides states in the authoritative Mishneh Torah:

A gentile who studies Torah is liable to the death penalty. They should be involved in the study of their Seven Mitzvot ["Noahide Laws"] only. (Moses Maimonides, Hilchot Melachim 10:9, Moznaim Publishing edition)

This accounts for why the rabbis and the "secular" Pharisaic offshoots (the ADL, ACLU, SPLC, etc.) don't want Christians to have the 10 Commandments in U.S. court buildings. They will not protest the "Noahide Laws" in court buildings, however. Indeed, they're attempting to install them there.

The legal double-standard inherent to the "Noahide Laws" is laid out in the Talmud:

"A Jew can only be put to death by a court of twenty-three judges, and on the basis of the testimony of two male witnesses who are not disqualified from testifying on account of kinship, and after being properly warned against committing the transgression. But none of these rules apply in the case of a non-Jew." (Babylonian Talmud, Sanhedrin 57b, Steinsaltz edition, vol.18, page 110)

After being subjected to the above kangaroo-court proceeding, the convicted goy would be executed for "violation" of any of the "Noahide Laws."

"... violation of any one of the seven laws subjects the Noachide to capital punishment by decapitation (Sanh. 57a)."(Encyclopaedia Judaica, "Noahide Laws")

One of the seven "Noahide Laws" is a prohibition against "idolatry." According to the most authoritative of rabbinic sages and the codifier of Orthodox Judaism, Moses Maimonides, Christians are idolaters and therefore subject to execution under "Noahide Law."

"The Christians are idolaters, and Sunday is their holiday..." (Maimonides, Mishneh Torah, Avodah Zorah, 9;4)

"... a gentile who worships false gods is liable, [for the death penalty] provided he worships them in the accepted manner. A gentile is executed for every type of foreign worship which a Jewish court would consider worthy of capital punishment." (Maimonides, Mishneh Torah, Hilchot Melachim 11)

Educate yourself on the tyrannical Talmudic system of double-standards, the "Noahide Laws," which the rabbis and treacherous world leaders are attempting to replace our traditional, universal moral principles with.

The REAL Hidden Dangers of the Rainbow

Benedict XVI and Hans Kung Discuss Need for "Global Ethic," not the Gospel

Against reasonable human hope, I am praying that something Catholic actually happens during this papal visit.

Sorry but this pope isn't catholic.
His duty is to destroy the little rest of catholic faith around the world by promoting oecumenism, kissing the jews, ...

Is it just me? I thought Christians were never to pray WITH jews, heretics, schismatics or infidels?

If that is the case the pope is anathema or at the very least deposed.

According to the story linked below, Benedict tells people before his outdoor Mass that scandals were fueled by breakdown in social morals.

Of course, this avoids the pink elephant in the room concerning infiltration. At the same time, it will no doubt convince "conservative" Catholics that Benedict is "Orthodox" since he's willing to call attention to the "culture war." Truly incredible. We're watching a slow moving train wreck on the way to the anti-Christ religion of the future --

look at these two texts :

Just sound to me that they are talking the same language.

Note that Ratzinger didn't pronounce once the name of our Lord, Jesus-Christ... but he refered to "God the creator" and of course to the holy "Universal Declaration of Human Rights"...

7 Noahide Laws is a universal Laws for all mankind. The best way to understand these laws is to educate oneself in order to know the truth. Jewish people has been shedding it's own blood because of the wrong accusations from the christians bible blaming them for killing their man-god jesus, who were supposedly also considered a Jew. Just imagine if most of your family members were victims of horrible inquisition, pogroms and holocaust? how would you feel? Being Jewish is part of a blessings from the Almighty G-d and also being a Noahide as well. Hope this will enlighten those who are seeking a true relationship with The Creator and Master of The Universe.

7 Noahide Laws is a universal Laws for all mankind.

The best way to understand these laws is to educate oneself in order to know the truth.

I agree. For those who want to know the truth regarding the Talmudic "Noahide Laws" I recommend going straight to the source--the Babylonian Talmud. In English, I recommend the Steinsaltz edition, tractate Sanhedrin 57a-57b. I am assured that those who do so will see through your deception and propaganda.