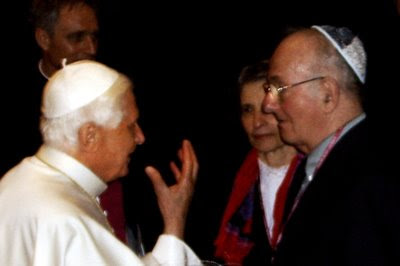 The following is an email reportedly written by Rabbi Nuesner on the topic of his meeting with Benedict XVI on April 17th in Washington D.C. (the anniversary of the Last Supper according to the Hebrew Calendar) which was also reported in L'Osservatore Romano April 30th edition:

Thursday the train was an hour and a half late and we nearly missed the event. But we walked to the hotel where we were to meet for transportation and the US Council of Bishops staff was terrific. We were on the last bus to the ceremony. When we got there, at 4 pm, we were put in a large auditorium. The Muslims were sent off in one direction and the Jews in another for minhah and the Islamic equivalent.

The pope came about an hour and a half later and spoke to the 150 religious leaders who were there and exchanged gifts with representatives of Judaism, Islam, Jainism, Hinduism and Buddhism. There were no other Christianities that were invited.

After the ceremony the Jews were led into another room and the Pope read a greeting for Passover. Then the presiding bishop asked Rabbi Neusner to step forward.

I attach the picture taken by a rabbi and emailed to me. The pope thanked me for my work, his English is excellent but was an effort, and when I told him he could talk to me in Italian, he had a big smile and looked relieved and relaxed. I proposed to him that we write a book together on the convergences of Judaism and Christianity in antiquity. A cardinal told me they would like to invite me to the Vatican, and I said that would be terrific.

The editor of 'L'osservatore romano' the Vatican newspaper introduced himself. I told him his assistant had given me an assignment and I would have it in his hands by the time he got home. That ended the session with the Jewish representatives.

What a triumph it would be for the rabbis if Benedict accepted Neusner's offer to co-write a book on "the convergences of Judaism and Christianity in antiquity," and what a smack in the face of Jesus Christ, the Apostles and saints who gave their lives to prevent such a thing.

The Pope and the Rabbi "Debate" Charade Continues to Play Out
Posted by Maurice Pinay at 8:55 PM