In 1982, President Ronald Reagan appointed Mr. Scalia to be a Judge of the United States Court of Appeals for the District of Columbia Circuit and, four years later, nominated him to replace William Rehnquist as an Associate Justice of the Supreme Court. The nomination was approved by the Senate in a vote of 98-0. He took his seat on September 26, 1986, becoming the first Italian-American Justice on the High Court.

Agudath Israel’s dinner this year will be honoring the 10th yahrtzeit of Agudath Israel of America’s late president, Rabbi Moshe Sherer, z”l, with the presentation of a special Sefer Torah written in his memory.

This year’s Rabbi Moshe Sherer Memorial Award for lifelong devotion to Klal Yisroel will be presented to Chaim H. Leshkowitz. The HaGaon Rav Aharon Kotler Memorial Award for distinguished service to Torah will be accepted by the Herzka family, in memory of Rabbi Yaakov Yitzchok Herzka, z”l. The Reb Elimelech Tress Award for the preservation of the legacy of the Shearis Hapleitah will be accepted by Nussy Elbogen, in memory of his father, A. Leibish Elbogen, z”l. The Moreinu Yaakov Rosenheim Award for distinguished service to Agudath Israel will be presented to Yitzchok Fuchs. The Wolf Friedman Young Leadership Award will be presented to Raphael Treitel.

Avodas Hakodesh awards will be presented to Simcha B. David, Yaakov Kluger and Rabbi Boruch Saks. 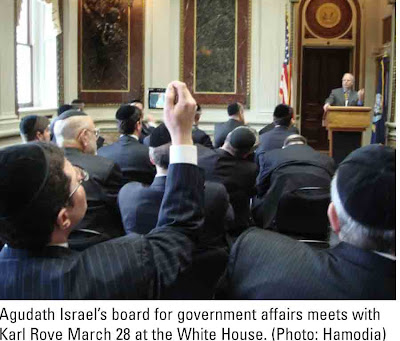 ... on the corner of Forty-seventh Street and Sixteenth Avenue... a meeting of the Council of Wise Men of the Torah. Sitting around a long table where an old master with a white beard is enthroned, Rabbi Yaakov Perlow, Rebbe of Novominsk and spiritual leader of the Agudath Israel of America, an assembly of rabbis, very handsome, very poetic. I don't think I've ever seen anything like this; it seems to come out of a story by Isaac Bashevis Singer. Two strange characters turn up who have come, to put it bluntly, to negotiate for the support of the Orthodox Jews for President Bush and his camp.

One of them, Norm Coleman, Jewish, a Republican candidate for a Senate seat from Minnesota, is a sort of blond yuppie with exceedingly white teeth and the smile of a wolf.

The other is Rick Santorum, Catholic, a Republican senator from Pennsylvania. I would interview him the next day, during a break in the convention, and he would explain to me that as a Catholic he is a fervent supporter of Israel and that traditional Catholics and Orthodox Jews see God and the world in similar ways.

Thank you, Coleman begins, beneath the suspicious and faintly amused gaze of the rabbis. Thank you, not just for being here but for being, for existing … I was born not far from here, but you embody another world … This world is an example … Your world is a model … Vote for me.

Your faith, Santorum adds, even more ingratiating, desperately trying, like a child, to meet the gaze of Rabbi Perlow, who, in the big black satin coat that he won't remove during the entire meeting, his face sealed off, withdrawn, seems completely absent—your faith is my own. The example of your faith and your belonging is what helps me live and believe. Tomorrow I have to talk to a devout assembly of Christians. Well, I hope you know that when I talk to them about faith, about the power and grandeur of hope, it's you I'll be thinking about. It's your example I'll bear in mind.

And the rabbis—diffident, ironic, with an air of immense disdain, and the drifting attention of people who have seen everything, heard everything, and who observe this sales pitch from their age-old summit of history and wisdom—are silently bored, ask a few questions, consult one another with a glance, and end up saying, just like that, without insisting, without abandoning their conspicuous detachment from whatever is not, directly or indirectly, linked to their religious concerns: Well, then, since you must know, here is what our community needs for its schools, synagogues, health services, and support for Israel in its struggle against terrorism ... ("In the Footsteps of Tocqeville," Bernard-Henri Levy, Atlantic Monthly, May 2005)


In "Revisionist History" newsletter no. 35 Michael A. Hoffman provided photo documentation of the above-referenced meeting between Senator Rick Santorum and the Agudath "Israel" rabbis.

Disabuse Yourself of Disinformation Surrounding Antonin Scalia
Posted by Maurice Pinay at 2:16 PM