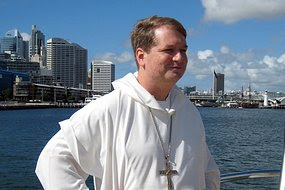 This scoundrel, Bishop Anthony Fisher of Australia, who has mocked the Catholic parents of two girls who were repeatedly raped by a priest in a Catholic grade school in Australia--one of whom has since committed suicide--has taken the greatest care in designing a "World Youth Day" stations of the cross which doesn't offend the tender sensibilities of the rabbis:

Another Kosher Stations of the Cross Concocted for "World Youth Day"

Could you imagine Bishop Fisher dismissing the rabbis as "dwelling crankily on old wounds"? It seems to me that Bishop Fisher is operating from the principle that there are two classes of people, one with much higher value than the other. This is not a Christian principle. It's a rabbinic principle.


World Youth Day organisers say comments made by the event's coordinator about victims of sexual abuse do not represent his true attitude, as the Vatican casts doubt on whether the Pope will offer them a full apology.

Bishop Anthony Fisher yesterday said some people were "dwelling crankily on old wounds", in response to fresh criticism about how the Catholic Church handles abuse by the clergy.

Bishop Fisher was referring to the case of two sisters who were repeatedly raped by abusive priest Father Kevin O'Donnell in Melbourne while they were in primary school.

Emma Foster committed suicide at the age of 26 earlier this year after suffering from anorexia and drug abuse.

Her younger sister, Katherine Foster, turned to alcohol and now needs 24-hour care after being hit by a car.

Their father, Anthony Foster, is on his way to Sydney from Britain, seeking an audience with Sydney's Archbishop, Cardinal George Pell, or Pope Benedict.

Mr Foster has told ABC TV's Lateline program he is calling for changes in the way the Church deals with victims.

The chief operational officer of World Youth Day, Danny Casey, has defended Bishop Fisher after the event coordinator yesterday expressed disappointment the issue had been raised during celebrations.

"If Bishop Anthony made particular comments about how some in the media seek to portray the church during abuse matters, he's a man of deep compassion, I know he feels great compassion and sympathy for the victims and for all those who have been hurt through abuse," he said.

Father Kevin O'Donnell was never tried on the Foster case but was convicted for other child sex crimes in 1995 and sent to jail. He died in 1997.

Cardinal Pell apologised to the Foster sisters as Archbishop of Melbourne in 1998. He encouraged the family to enter the Towards Healing Program, which capped compensation payments at $50,000.

The family rejected the offer, instead opting to pursue the Catholic Church through the courts for eight years. They eventually negotiated a settlement, believed to be the largest compensation pay-out of its kind in Australia.

Despite an earlier admission and an apology from Cardinal Pell, the Church's lawyers later denied any admissions had been made about the abuse of the two girls.

Meanwhile, Pope Benedict's spokesman has raised doubts over whether the pontiff will offer a full and unreserved apology for sexual abuse by clergymen during his visit to Sydney.

The contradictory signal came just three days after the pontiff himself, during his flight to Sydney, said he would apologise.

The director of the Vatican press office, Jesuit Father Federico Lombardi, says the Pope has not given a commitment he will apologise to abuse victims and may simply refer to the issue in a "statement".

"I draw your attention to the term 'apology' that journalists are using," Father Lombardi said in Italian during a press conference.

"The Pope in the plane [to Australia] spoke of the problems of sexual abuse but I don't think he said he would apologise and I advise you to listen to what the Pope says when he raises the issue."

Father Lombardi later warned against pre-empting what the Pope might say, while speaking on ABC Radio's AM program.

"The question is maybe also about the word 'apology' because maybe you expect some particular meaning," he said.

"The Pope has explained very well already on the plane what he thinks about the problem. He has already said many things very clearly in the USA about this problem."

But the pontiff was clear on Sunday when he told journalists in English that he would examine how the church can "prevent, heal and reconcile" the past crimes of the clergy.

"This is the essential content of what we will say as we apologise," he said.

Father Lombardi, who speaks limited English, says the Pope will probably speak about sex abuse in the church during a meeting with bishops and Australian novices on Saturday.

It was in the same forum that the head of the Catholic Church apologised for the scourge during a visit to the United States earlier this year.

The Pope's spokesman also says the pontiff is aware of the media coverage sexual abuse issues have been getting in Australia but will not directly intervene.

"Obviously he is informed but he respects very much the competence of the church in different lands," he said.

He says the Pope fully supports the Archbishop of Sydney, Cardinal George Pell.

"Naturally, the Pope always support the bishops in the entire world because they are the collaborators and the guiders of the church.

Posted by Maurice Pinay at 1:28 PM