From "Israel" to Los Angeles

As big as this is, it's rather small-time compared to CIA and Mossad drug-running and money laundering operations, but apparently big enough to draw the ire of these organizations. Also, Moroccan "Jews" are low on the totem pole in racist "Israel."

From Israel to Los Angeles 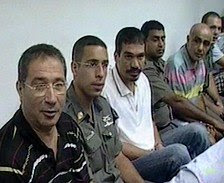 Meir Abergil (left) and Yitzhak Abergil (third from left) in court on Tuesday.

When the Abergil crime organization needed to expand its drug operation in Los Angeles, US federal prosecutors claim they turned for help to an upstart Latino street gang known as the Vineland Boyz.

Named after a street running through working-class San Fernando Valley neighborhoods northwest of downtown Los Angeles and just a few miles from glamorous studio back-lots, the Boyz allegedly first teamed up with Israelis in 2000, offering protection to Itzhik Abergil's partner Moshe Malul and helping him deal thousands of Ecstasy pills in their territory.

"Somebody from the street gang needs large quantities, and the Israelis can provide a source," said Myles Malman, a former assistant US attorney in Miami who prosecuted Israeli crime-rings there. "The Israelis control the Ecstasy trade from the source, but not on the street."

The Vineland Boyz were in many ways perfect partners for Abergil and Malul. First established in the late 1980s by members of a high school football team, they established themselves by fighting for control of their turf with the Mexican Mafia, the dominant gang controlling illicit activities in Southern California neighborhoods and prisons.

Their feud with the Mexican Mafia, known as "La Eme," sent the Boyz looking for ready supplies of drugs, and the Israelis could provide them. Prosecutors allege Malul took shipment of more than a million Ecstasy tablets in Los Angeles in April 2001 alone and sold them through the Vineland Boyz network.

By 2003, a member of the gang, Luis Sandoval, known as Hog, was working as a hit man for the Abergil-Malul drug syndicate. According to a sweeping federal indictment, Sandoval and two unidentified co-conspirators had gone to Cafe Bazel, a chic restaurant popular with expatriate Israeli artists in the Encino area, and fatally shot a man suspected of stealing 76 kilograms of Ecstasy tablets from Malul and Abergil.

The August 31, 2003, hit appears to have been the high point of the Israelis' collaboration with the Vineland crew. Within a few months, Abergil, possibly concerned about new organized-crime laws in Israel, allegedly began distancing himself from Malul in conversations with unnamed associates, telling them that Malul made the decisions for his own group.

In November 2003, the Vineland Boyz became the targets of a multi-layered probe by the Los Angeles Police Department and federal officials after a suspected member of the group allegedly shot and killed a police officer in the Los Angeles suburb of Burbank and then fled to Mexico, prompting public calls for a crackdown.

In 2005, the gang was largely undone by a massive raid in which 1,300 law enforcement agents arrested two dozen members on racketeering charges and a host of drug and weapons counts.

Abergil, whose organization the US State Department ranks among the top 40 drug importers into the country, was quick to establish other connections in Los Angeles. He partnered with one pair who allegedly arranged transport of Ecstasy tablets stuffed inside toy tigers from the Abergils' base in Antwerp, Belgium, to California, according to the indictment. Other loads went by Federal Express or other direct mail services.

"They all will make these alliances where they need help," said Jonathan Edelstein, an attorney in private practice who has written legal articles about Israeli narcotics smugglers. "If for whatever reason it becomes unworkable with a certain group, then they find another group."

Posted by Maurice Pinay at 2:06 PM