Palin: 'Only Flag in My Office' Is Israeli 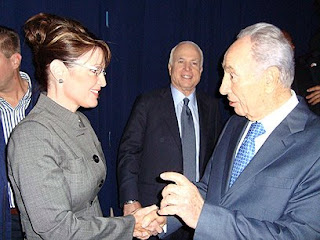 PALIN: 'ONLY FLAG IN MY OFFICE' IS ISRAELI

President Peres of Israel yesterday met for the first time with Governor Palin and with Senator McCain, who called the veteran Israeli statesman "my old friend." The warm handshake and exchange of broad smiles occurred during an international gathering known as the Clinton Global Initiative, hosted by President Clinton. "I wanted to meet you for many years," Ms. Palin told Mr. Peres, according to an aide to the president. "The only flag at my office is an Israeli flag," she was quoted as saying, "and I want you to know and I want Israelis to know that I am a friend."

Palin to Peres: I'm a longtime friend of Israel

Friendly encounter in US between Republican VP nominee, Israeli president

Upon meeting the Israeli president Palin told him she has wanted to meet him and get to know him for years. She added that the only flag in her office, aside from the American flag, is the Israeli flag, stressing that she wants Israelis to know that she's been a longtime friend of the Jewish state, and will remain such.

Peres also took the opportunity to briefly speak to Republican presidential hopeful John McCain, who referred to the Israeli president as a longtime friend.

Also Thursday, Peres met with United Nations Secretary General Ban Ki-moon and harshly criticized the decision to allow Iranian president Mahmoud Ahmadinejad to deliver his UN speech. Peres said the address was embarrassing, stressing that people like Ahmadinejad must not be provided an international platform by the UN.

Peres added that Iran's views are perceived as radical even in some Arab states. The UN secretary general listened to Peres' words but did not respond.

Posted by Maurice Pinay at 1:00 PM

MOST OF US ARE MENTALLY TRAPPED TO THINK JEWISH

Actually, it is safe to say that virtually every mainstream publication or or other type of media organ is “nothing more than a screen to present chosen views.” The great battle over the last century has been a battle for the mind of the Western peoples, i.e., non-Jewish Euros. The chosen won it by acquiring control over essentially the complete mainstream news, information, education and entertainment media of every type, and using that control to infuse and disseminate their message, agenda and worldview, their way of thinking, or rather the way they want us to think. Since at least the 1960s this campaign has been effectively complete. Since then they have shaped and controlled the minds of all but a seeming few of us in varying degree with almost no opposition or competition from any alternative worldview. So now most of us are mentally trapped in the box the chosen have made for us, which we have lived in all our lives. Only a few have managed to avoid it or escape it, or to even sometimes see outside of it, and so actually “think outside of the (Jewish) box.”