More on the Synod Rabbi 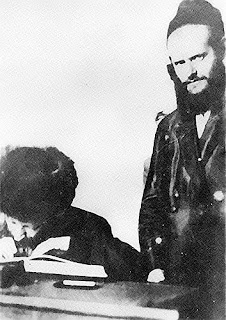 
Rabbi She'ar-Yashuv Cohen, who Benedict XVI has invited to address the synod of bishops this week, is a protégé of the Messianic Zionist Rabbi Avraham Yitzhak Kook. Rabbi Kook can be credited with formulating the religious rationalization for the "return" of "the Jews" to "Israel" without the arrival of "the Mosiach" occuring beforehand. He taught that "the Jews" themselves bring about "the redemption" through Zionism. This teaching harmonizes with such anti-biblical concepts as "forcing God's hand" and "as above so below." This pantheist pagan view is illustrated in Kook's statement regarding the Zionist state which he said is: "The foundation of God's Throne in the world, whose entire desire is that God shall be One and His Name shall be One." Kook wrote, "Nothing in our faith, either in its larger principles or in its details, negates the idea that we can begin to shake off the dust of exile by our own efforts, through natural, historical processes ... that we have a sacred duty to try to do so by whatever means are at our disposal."

In the mind of Rabbi She'ar-Yashuv Cohen's mentor Rav Kook, Zionism is the vehicle through which the apocalyptic rabbinic "redemption" should be humanly created by whatever means possible.

Rav Kook looked forward to the final annihilation of all other nations and cultures and the exultation of "Israel" in the Zionist "messianic" age:

The sin of the murderers, wicked kings of the earth and all the evildoers of the land has been completed. The earth cannot achieve atonement for the blood spilt upon it except through the blood of the one who shed it. The atonement must come: a general elimination of all the present-day cultural machines, with all their falsehood and trickery, with all their awful filth and venom. This entire culture, which exalts itself with instruments of falsehood, must, by necessity, be annihilated from the world, and in its place will emerge a kingdom of the sacred and exalted. The light of Israel will appear, to establish the world with peoples of a new spirit. (Orot Ha-Milchama)

Rav Kook founded the first Zionist yeshiva in Palestine which Rabbi She'ar-Yashuv Cohen was trained at, the Mercaz HaRav. This yeshiva is known for its role in the formation of the ultra-racist, terrorist so-called "settler movement:"

The foundations for the religious settlements in the West Bank were forged in Mercaz Harav, whose student Hanan Porat set out to restore the Jewish settlement in Gush Etzion immediately after the Six-Day War. The founders of Gush Emunim, a religious political movement that encouraged Jewish settlement of land they believe God promised the Jews, came from Mercaz Harav after the Yom Kippur War.

Rabbi Kook encouraged his students to go out and fight for the settlements in the West Bank. He himself took active part in these struggles. (Mercaz Harav - the flagship of national-religious yeshivas," Haaretz, 07/03/2008)

Rabbi Kook was also unique in that his yeshiva encouraged military service. Rabbi She'ar-Yashuv Cohen apparently took this teaching to heart as he has a long history of militant activity in service of the terrorist Zionist state of counterfeit Israel. Rabbi She'ar-Yashuv Cohen was associated with the terrorist Irgun gang HERE. He is the pioneer of the Yeshivat Hesder (arrangement) which is to say, the terrifying combination of advanced yeshiva training in Talmudic racial supremacy with armed "defense."

Rabbi She'ar-Yashuv Cohen, Chief Rabbi of Haifa: "I was the last Jew to leave the Old City - wounded, on a stretcher, to Jordanian captivity. In 1967, when the war broke out, I requested of Gen. Rafael Vardi that if Jerusalem is re-conquered, I would like to be the first citizen to return to it. As soon as they conquered the city, Gen. Vardi sent a jeep to the City Hall where I was at the time, and it brought me to the Old City. On the radio in the jeep I heard the recording of Motta Gur saying 'The Temple Mount is in our hands!', and then we entered the Old City, where I met my father-and-teacher the Nazir [Rabbi David Cohen] and my teacher Rabbi Tzvi Yehuda HaKohen Kook, who had entered a few minutes before me." ("Remembering the Reunification of Jerusalem," Arutz Sheva, 06/06/05)

Rabbi Cohen is currently active in wacko Temple Mount initiatives and has recently stated that the ban on "Jews" ascending the Temple Mount no longer applies:

There is much more that could be and indeed should be said about this man whom Benedict XVI has invited to address the synod of bishops this week.
Posted by Maurice Pinay at 1:42 PM

The Ends justify the Means... Kooks