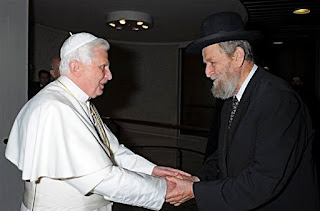 Like Yin and Yang
Pope Benedict's Synod rabbi, Rabbi She'ar-Yashuv Cohen waxes nostalgic during a Chabad interview in which he relays a legend which has the Chabad "Rebbe" Menachem Schneerson hiding in his grandparents' basement for seven months during which time "The Rebbe" taught his grandfather "a little bit" from the racial-supremacist Tanya. Rabbi She'ar-Yashuv Cohen tells of the special attention he later received from "The Rebbe" during his many visits to Chabad headquarters at 770 Eastern Parkway in Brooklyn, New York. The interview is at this link:

It might seem outrageous for the "first rabbi invited to address a synod of bishops" to close his address with a guilt trip vis. Pius XII "not doing enough to save 'the Jews' during WWII" and a warning for the bishops to "prevent Iran from causing another Holocaust" while he himself was involved in the terrorist ethnic cleansing of Palestine and continues to be a teacher of genocidal racial-supremacist Judaism, but it's really par for the course. This is the fruit of the "Judeo-Christian relations" racket which is in itself outrageous.

Here are a few teachings from the text of racial-supremacist pantheism, the Tanya which Rabbi She'ar-Yashuv Cohen fondly recalls that the Chabad "Rebbe" taught to his grandfather:

"... the explanation of the matter, [is to be found] in light of what Rabbi Chayim Vital wrote in Shaar HaKedushah (and in Etz Chayim, Portal 5, ch. 2) — that every Jew, whether righteous or wicked, possesses two souls, as it is written, “And neshamot (souls) which I have made. ... The second, uniquely Jewish, soul is truly “a part of G-d above,”

"The souls of the nations of the world (the Gentiles), however, emanate from the other, unclean kelipot* which contain no good whatever, as is written in Etz Chayim, Portal 40, ch. 3, that all the good that (Gentiles) do, is done out of selfish motives. So the Gemara comments on the verse, “The kindness of (Gentiles) is sin” — that all the charity and kindness done by (Gentiles) of the world is only for their self-glorification..." (Chapters 1 and 2)

"The lower category consists of three completely unclean and evil kelipot, containing no good whatever... From them flow and are derived the souls of all the nations of the world (Gentiles), and the sustaining force of their bodies. Also derived from these kelipot are the souls of all living creatures that are unclean and forbidden to be eaten, and the sustaining force of their bodies." (Chapter 6)

There is no effort from the pope or any bishop or priest that I am aware of to encourage rabbinic reform of base, tribal hatred such as this which in truth is so fundamental to rabbinic texts and tradition that genuine reform is no more possible than reformation of Nazism.
Posted by Maurice Pinay at 2:33 PM