To the "goyim" the black hats say these ugly structures that they put up in front of U.S. official buildings are symbols of "light" and "unity" of "the nations." But, among themselves they say:

Yes, and it's also a brazen mark of chutzpah and hypocrisy, given that the "displays of belief" that the "American Jewish Community" is most "uncomfortable" with, based upon the incessant shrieking and litigation, are Christian symbols. I haven't witnessed discomfort with these ridiculous 20 and 30 foot-tall metal and PVC menorahs in front of court buildings, the White House, etc., on the part of the "American Jewish Community." 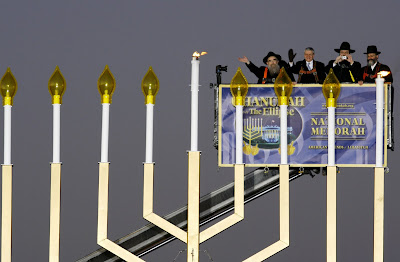 White House Chief of Staff Joshua B. Bolten second from left, Rabbis Abraham Shemtov, left, Levi Shemtov and Nachman Holtzberg, right, light the so-called National Hanukkah Menorah, at the Ellipse, near the White House during a lighting ceremony marking the beginning of the celebration of the Hanukkah, Sunday Dec. 21, 2008. Associated Press.
Also see:

How Wisconsin Bishop Listecki and His Flock Observe Advent
Posted by Maurice Pinay at 3:43 PM