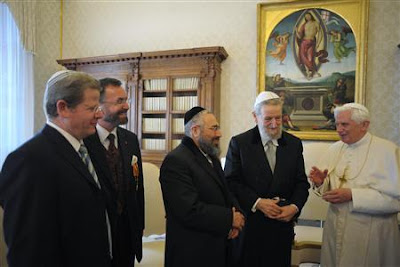 The rabbis want their Holocaustolatry in the minds and souls of children at SSPX schools as is already happening in the Novus Ordo. And note that both Rabbi David Rosen and Rabbi Shear Yashuv Cohen who the pope met with today are signers of the Holy See's Commission for Religious Relations with the Jews/Chief Rabbinate of "Israel" joint document which promotes the monumental lie that the "Noahide Laws" of the Talmud have a Biblical, even New Testament basis. See:

The two sides resumed a dialogue that was interrupted by the case of a Holocaust-denying bishop, which brought Catholic-Jewish relations to their lowest point in half a century.

The Israelis also asked that the Vatican take a strong stand against the draft final declaration of next month's U.N. conference on racism, a statement some countries view as hostile to Israel.

"May we suggest for your consideration that the history and the moral import of the Shoah ... become a required subject for inclusion in the curriculum of students at all Catholic schools the world over," Rabbi Shear Yashuv Cohen asked the pope during a meeting at the Vatican, using the Hebrew word for Holocaust.

Cohen, who is chief rabbi of Haifa, said such a move would "reinforce your strong stand against Holocaust denial and declaring anti-Semitism as a sin against God."

Rabbi David Rosen, International Director of Interreligious Affairs for the American Jewish Congress, told reporters afterwards: "I hope a recommendation (from the pope on Holocaust studies in Catholic schools) will come out of this latest crisis. That will be a silver lining to the cloud."

The meeting between representatives of Israel's chief Rabbinate and Vatican officials on Wednesday and Thursday was to have taken place last month but was postponed by the Jewish side because of the controversy over Bishop Richard Williamson.

On January 24, Benedict lifted the excommunication of Williamson and three other traditionalist bishops to try to heal a 20-year-old rift that began when they were thrown out of the Church for being ordained without permission. Williamson has said he believed there were no gas chambers and that no more than 300,000 Jews perished in Nazi concentration camps, compared with the figure of 6 million accepted by mainstream historians.

The pope has since made several major declarations to repudiate Williamson's views and condemn anti-Semitism and Holocaust denial.

The Jewish delegation also asked the pope to instruct Vatican diplomats to take a strong stand against the current draft of the final statement of the U.N. Conference on Racism due to be held in Geneva April 20-24, known as Durban II.

The Vatican has said it will attend the conference but hoped for a change in the wording of its final declaration. Both Italy and the United States have said they will not attend unless there is a change of wording.

Frankly, I wouldn't want to be the Pope. He's taking broadsides from within and without. But, it's becoming clear that Jews have a great deal of leverage with him. His latest epistle calls them, "Our dear Jewish friends". Jeeze....

Our dear Jewish friends are the very ones raking all the muck they can with L'affaire Williamson. He seems to be exceedingly sensitive to any criticisms from the kibbutz corner.

And the problem with this is?

THE FINAL DOCTRINE OF VATICAN II

Those martyrs that the Vatican is drunk with the blood of, includes the Martyrs of Palestine and Iraq and elsewhere being murdered right now by the Antichrist Zionist Yisrael.

Hello. Great site here Pinay. I was wondering if you could tell me what happened to Vicomte Leon de Poncins? Thanks.

"I was wondering if you could tell me what happened to Vicomte Leon de Poncins?"

I know nothing of Vicomte Leon de Poncins aside from his writings in Judaism and the Vatican, and Freemasonry and the Vatican which were insightful, important books at the time they were written. One of these books has a brief bio as I recall.