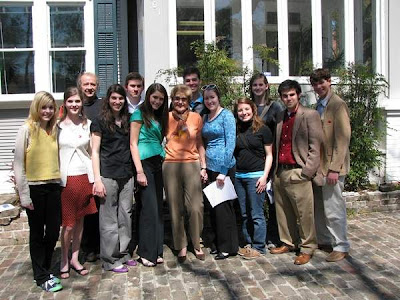 A two-part production, “And Then They Came For Me: Remembering the World of Anne Frank and 100 Years of Broadway is scheduled for 7 p.m. April 3 and 4, and 2 p.m. April 5 at the Houma school, 209 S. Hollywood Road.

“This will truly be a night of entertainment you won’t soon forget,” said Anne Mohana, director of the drama portion of the show. “It’s very different from our past shows which have mostly been big musical productions that were light and fluffy.”

The show features two groups of students — a show choir and a drama group. Mohana said the show opens with the Medley Group and their presentation of “100 Years of Broadway.”

“It’s about 40 minutes of the best show tunes from the last 100 years of Broadway — tunes that many older residents grew up with,” she said.

The second part of the show is a dramatic production entitled, “And Then They Came for Me: Remembering the World of Anne Frank.”

“The piece depicts the lives of Anne Frank and two other young characters from her diary,” Mohana said. “The story line jumps back and forth through time.”

The play also features an audio-visual component, in which footage of the actual survivors are projected onto a big screen placed on stage with the student actors.

“Footage of the characters in their older years will be played on screen while their younger selves will be acted out on stage by the students,” Mohana said. “There is one part in the play where one of the young characters actually appears to be talking to his older self on screen; it makes for some very interesting drama.”

The play has won American Theater awards by tackling some serious issues while being written sensitively enough for young audiences.

“This is a great way to introduce these disturbing topics of war and holocaust to audiences in fifth, sixth and seventh grades,” Mohana said. “As adults we have to shield our younger kids from the horrors of these stories, but children are resilient and intelligent; they can handle the subject matter if presented in the right way — and this play is the right way.”

She said three local pre-teens have parts in the play as Hitler youths.

“I didn’t think they really understood the magnitude of the information they were playing a part of,” Mohana said. “Just goes to show you how bright young kids are because they went home one night and had a lengthy conversation about the topic with their parents at dinner.”

The production serves as more than just merely entertainment. Students involved in the piece made a trip to New Orleans to meet and speak with a woman who fled to Monroe with her family during the Holocaust to get a deeper understanding of the parts they would be playing.

Mohana added that she admits the play is a little risky.

“It is definitely not light, fluffy or a safe call,” she said. “I don’t think there are many other high schools out there that would be willing to tackle such a seriously dramatic event.”

The two performances together is approximately two hours and 15 minutes including intermission. The Medley Group is being co-directed by Ginny Medina-Hamilton and Hannah Arceneaux.

Tickets cost $5 for students and $8 for adults. Adults who bring 10 students get one free adult admission. All tickets will be sold at the door starting 30 minutes before each performance. For information, call Mohana at 876-2551.

Another survivor of the 'everyone was killed death camps.'

Haavara relocation camps for the invasion of Palestine is what they were.

hey mr. james...
are you serious?
because there are survivors,it didn't happen?
do you guys have any brains?

It would be cool if one of those kid actors were to break away from the script towards the end of this political fiction play and shout at the top of their lungs :
" It's all a big hoax and it's evil in so many ways . I will not be a part of bearing false witness against the German people of history and in doing so supprting the anti -Christian talmudic forces of this mixed up modern world! "
" Go ahead , send me to jail for speaking the truth ! , call me a martyr and call me a true Christian kid with guts ! "

I would suggest that theses high school students, and perhaps the faculty, consider a more recent 'holocaust' that may have more relevance to high school students, and do some missionary work there...This recent one was the mass murder of predominantly Christian students at Colombine HS, Colorado, perpetrated by Jewish students who belonged to what they called the 'Trench Coat Mafia'...Consider the one murderer (Dylan Klebold), who found a young Christian girl reading the Bible in the midst of the massacre (Rachell Scott), walked up to her and said 'Say a prayer to your God' and then shot her in the head...He, or his fellow 'religionist' Eric Harris, also murdered a young Christian girl named Cassie Barnell...The question asked Cassie: 'Do you believe in God'...Her answer: 'Yes'...Their reply?...A bullet in her head...I am sorry to have to bring this up, but what truth was told about this holocaust, where the targets were Christians, blacks an 'shiksa' girls?...We do not forget our martyrs...

So I just Googled myself and what do you know? I find myself smack in the middle of this sorry-excuse-for Christians hating on Jews website. I'm Brittany Eschete, lead role in the aforementioned high school production, and frankly I am not much pleased to be a part of this website. What kind of Christians can sit here and say that Jews are bad and the Holocaust was a lie? An evil person (aka. Adolf Hitler) decides that he wants to commit genocide of the Jews (and others such as blacks, homosexuals, and gypsies), and there is evidence of this horrific event taking place, and you people seriously have the nerve to be angry at people for SURVIVING a death camp? Because it was a death camp they should've died? That's mighty Christian of you. I'm sure Jesus would've wanted the forces liberating these camps to stop because the people in death camps should just have to die like the millions of others.
There is another comment on this page about how we should've flubbed our lines at the end to express to the student body the "truth" about the Holocaust being a lie against the German people. Unfortunately I'm not a total idiot, so your dream didn't come true. Maybe when the people who lived through it finish dying off THEN you can deny all the other documented evidence and say the whole thing was a lie. Sadly it was't. And I do not hold anything against the German people for this horrendous event. You know most of the Jews that went through the Holocaust were German.
Which brings me to the other comment on this page about the Colombine shootings. There are only two kinds of people in the world. Good people. And bad people. Just because a group of Jewish extremists commited terrible murder on Christians doesn't make it any worse than any other brutal murdering. There are bad Jews like there are bad Catholics and bad Eskimos. People are people. It's not what they are, but what they do that matters.

Also I think it would've been inappropriate subject matter for a high school play.

In conclusion, I hope that this little seventeen-year-old Southern girl has been able to teach you people something about what it means to be Christian. I could've gone on much longer, but it isn't much worth it. My greatest hope would be that you remove this article from this craphole website.

A lot of love for some "christians" eh? I mean I'm pretty sure the holocaust has more evidence than the christian bible. This just seems like a gathering of the ignorance of "christians". You all give christians a bad name and should be ashamed that you use the loss of human life as a slander against another religion/people/etc. To say that the holocaust is fiction is just another declaration of your blind faith. Hitler will tell you all his stories while you burn in hell.