The True 'Spirit of Assisi' Unveiled

'Dialogue' and the 'Spirit of Assisi' under the 'Noahide' rainbow. 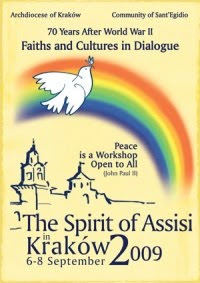 One important event will be a pilgrimage, unprecedented in size and representation, to the Auschwitz-Birkenau death camp, on September 8. This will serve as a sign of reconciliation and peace and a symbol of a radical rejection of violence and war as a way of solving international conflicts.

The program will begin with an inaugural Mass tomorrow, presided by Cardinal Dziwisz at the Divine Mercy Shrine. In the afternoon, there will be an Inaugural Assembly in the Auditorium 'Maximum' of Krakow. On September 7, there will be 22 round-table discussions in various parts of the city, which will address various themes including: Do Not Forget Auschwitz; the Legacy of John Paul II; Latin America in a Globalized World; Religions and the Challenge of Materialism; Dialogue of Faith and Culture; Faiths in Asia: Building a World Without Violence; Africa, Land of Opportunity; Religions and Global Health of the World: the Rebirth of Africa; The Power of Prayer Over History; Faith and Science.” The final day, September 8, in the morning there will be a Silent March to the gas chambers of the concentration camp at Birkenau and a Memorial Ceremony at the International Monument to the Victims of Nazi-fascism. In the afternoon, following the prayer encounters at various sites, the various religious communities will meet for a Peace Procession that will make its way to Market Square, where the closing ceremony will be held.

Rome Hosts Conference on "The Contribution of Judaism to Our Contemporary World."

The REAL Hidden Dangers of the Rainbow
Posted by Maurice Pinay at 1:03 PM

Did Bishop Fellay attend? If not did he at least comment on it?