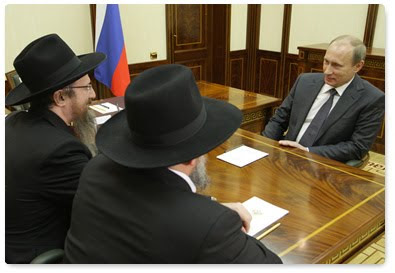 What an expedient relationship. Rabbis thank Putin for the assistance of the Red Army. Putin thanks Rabbis for their assistance, via Shoah Business, in covering up the atrocities of the Red Army. There is complete agreement in their opposition to "Holocaust" revisionism:

Vladimir Putin: I am very happy to see you. We have been trying to meet and talk for a long time. We had an opportunity to discuss our current business together briefly. I know about your project, and I remember that you told me about the construction of a museum. How is it going?

Berl Lazar: Despite the crisis, the project we planned and that you helped start is being carried out on time. We planned to open the museum in two years, and this is still realistic.

Vladimir Putin: Is it being built or not?

Berl Lazar: The building has already been finished. Now we need to finish the interiors... Much work is still ahead, but, thank God, we can already see the light at the end of the tunnel.

Today is the eve of January 27, and we think that this is a very big event. We Jews will never forget what the Soviet Army, the Red Army, did for us during World War II. We must clearly emphasise this and tell people how it was in reality, because, regrettably, what we see happening in Ukraine in the last few days is simply appalling. We cannot accept this, and we will help people understand these issues so that everyone is clear on the past. Historical facts are the best answer when we see something like this.

Vladimir Putin: I closely follow what is happening in the world to distort history, in particular, to deny the Holocaust. I would like to note that Jewish organizations are our consistent allies in our efforts to preserve the memory of the victims of Nazism and the real tragedies of World War II. We had their support when the monument was moved in Tallinn, and we see this in other regions of the world, where attempts are made to revise the truth about the tragedy of World War II. We have seen how consistent Jewish organizations are in Russia as well, and we absolutely agree with you on this issue. I would like to thank you for that.

Berl Lazar: I think that those who saw and felt this tragedy cannot deny it. There are many people who, by no coincidence, continue to say: we were there, we know who helped us and who did not. This is not even a question.

Overall, I think that the Jewish community in Russia would like to prove that it is impossible to deny this moment and the Holocaust as a whole, and to prove participation of every nation that helped us. This is an ideological approach. This is not only because some people helped and some did not. Nazism is bad not only because its proponents killed, but because they killed and justified their actions. There were people who helped them in the Baltic countries and in Ukraine - local people took part in the liquidation of the Jews.

Saying that the Nazis came and the people resisted is not enough. There were many people who did many things, but on the whole it was the state that helped. That is why it is frightening when now some are trying again to come up with their own versions of history.

Interesting. I thought geo-politically Russia would be opposed to the interests of counterfeit Israel, but that may be a separate issue from the Holocaustolatry that Putin is peddling with the rabbis.

If Iran is in the Zionists' pocket already, why threaten war with Iran?

"History of the Arab people, Iraq has always been the political capital of the Arab people and Palestine the Holy Land of the Arab people.
"
I don't know what history books you're reading but the HolyLand for the Arabs/Muslims has been Medina/Mecca area for a very very long time...
Jerusalem is not even mentioned in the Koran and it was a sleepy backwater of the Ottoman Empire that noone paid much attention to until the Jews began to return.
It's interesting to read Mark Twain's descriptions of the area in the 1800s as a dusty empty mostly abandoned land.

you poor Christians have so many enemies....

Some comments on the 'furthest mosque' in the Koran:
Some early Muslims understood it as metaphorical or as a place in heaven. And if the "furthest mosque" did exist on earth, Palestine would seem an unlikely location, for many reasons. Some of them:

Palestine had not yet been conquered by the Muslims and contained not a single mosque.

The "furthest mosque" was apparently identified with places inside Arabia: either Medina or a town called Ji‘rana, about ten miles from Mecca, which the Prophet visited in 630.

The earliest Muslim accounts of Jerusalem, such as the description of Caliph ‘Umar's reported visit to the city just after the Muslims conquest in 638, nowhere identify the Temple Mount with the "furthest mosque" of the Qur'an.

The Qur'anic inscriptions that make up a 240-meter mosaic frieze inside the Dome of the Rock do not include Qur'an 17:1 and the story of the Night Journey, suggesting that as late as 692 the idea of Jerusalem as the lift-off for the Night Journey had not yet been established. (Indeed, the first extant inscriptions of Qur'an 17:1 in Jerusalem date from the eleventh century.)

So many trolls with so much time on their hands to uttering blasphemies, especially against the Blessed Virgin! Useless to talk with them, especially as they think themselves superior to us stupid Christians! Well, when they die, we'll see who's truly stupid!

What leaves me saddened by this article, and it is the sadness of discovering a reality, is the fact that I had hoped that Mr Putin would be the one world leader who would not take any guff from these people. Indeed some of his praiseworthy actions against the rapacious oligarchs early in his Presidency, many if not all of whom were members of that once-chosen people, seemed to indicate that he was not beholden to them in any way. It looks now as though he is yet another leader sitting in fear of them. It is unknown how his successor is dealing with these issues.

How I hope that God will have pity on us and send to us, at long, long last, a Pope with a backbone, and with a realistic, Catholic view of those people. St Pius X was the last Pope in recent memory to speak the terrible truth to the Jews, and the last one to actually condemn their desires to take over Palestine. Benedict, for all his good qualities, seems to live in terror of them and this is one more reason to keep praying for the man.

Mr Putin, though far from perfect, was making the right noises for awhile. One can only hope this meeting was merely diplomacy and not yet another example of slobbering obsequiosness.

And by the way, I think "Anonymous'" comment about trolls to be very perceptive. I'm hardly an expert on the agent-provocateur, but if I was I'd study quite carefully some of these long-winded diatribes I've seen here.

Hey Mr. Who Likes To Call People Stupid:
(I'm actually a member of Mensa).
It's already obvious...we don't have to wait for anyone to die...the ascendancy of Israel is overwhelmingly real in this world. If you have the time, please read the books of the Prophets of Israel and see what is going on today. Everything they said about the return to Zion and the flourishing of the Jewish people is actually happening.

Your obsession with it is proof of that...Your utter inability to effect anything in the real world besides post these ridiculous diatribes against anything and everything to do with Jewish people is further proof of the ascendancy and primacy of Israel as Xtianity is dissolving before our very eyes.

Putin's relationship with the rabbis has been ongoing for many years. It's an expedient relationship as best I can tell. Appearances can be deceiving with rabbis and ex-KGB men.

I would ask you, however, on what basis would you say that the Judaic oligarchs of Russia are once-chosen people?

do not forget that talmudists such as Marx and Moses Hess spread communism around. The Bolshevik revolution was planned and financed in new York..After 1948, the central 'intelligecia' was moved to Telaviv, was this city when the capital of Israel....Putin is just another puppet, a pawn in the game of the world talmudists...

What you say about the Bolshevik revolution is true; see this article.

Yes, it's sad to see Russia being manipulated like this.