"Notre Dame is Not a Synagogue"

Report: Current Knesset Most Racist of All Time

Report: Current Knesset most racist of all time


Posted by Maurice Pinay at 5:02 PM No comments:

WASHINGTON, March 17 /PRNewswire-USNewswire/ -- The US Department of Justice has been formally asked to begin regulating the American Israel Public Affairs Committee (AIPAC) as the foreign agent of the Israeli Ministry of Foreign Affairs. A 392 page legal filing presented by a four person IRmep delegation in a two hour meeting with top officials of the Internal Security Section substantiated the following case for AIPAC's immediate registration:

1. AIPAC is a spinoff of an organization already ordered by the DOJ to register as an Israeli foreign agent. In November of 1962 the American Zionist Council was ordered by the Attorney General to begin filing disclosures as an Israeli foreign agent under the 1938 Foreign Agents Registration Act. http://www.IRmep.org/1962Order.pdf Six weeks later, former AZC employees incorporated the American Israel Public Affairs Committee in Washington, DC, taking over the AZC's lobbying activities. http://www.IRmep.org/AIPAC.pdf AIPAC did not register as a foreign agent.

2. AIPAC's founder Isaiah L. Kenen was the chief information officer for the Israeli Ministry of Foreign Affairs in New York and for a time duly registered in that role. http://www.IRmep.org/Kenen.pdf The Justice Department ordered Kenen to personally re-register after he formally left the Israeli Ministry of Foreign Affairs to head up private lobbying and publicity for the Israeli government at the nonprofit American Zionist Council. Kenen never complied with the order. http://www.IRmep.org/order.pdf

3. Espionage related FBI investigations in 1984 and 2005 reveal AIPAC's ongoing stealth foreign agency activities. Declassified FBI files released on the Internet last week reveal that in 1984 AIPAC and the Israeli Ministry of Economics were investigated for jointly obtaining and circulating classified US economic data to obtain favorable trade benefits for Israel. http://www.irmep.org/ila/economy In 2005 Pentagon Colonel Lawrence Franklin pled guilty and two AIPAC employees were indicted for obtaining and circulating classified US national defense information to Israeli government officials allegedly in the interest of fomenting US action against Iran.

4. AIPAC's executive committee consists of the original member organizations of the AZC in addition to newer members. The Conference of Presidents of Major Jewish Organizations, the umbrella group of AIPAC's executive committee, is housed in the same New York office as the World Zionist Organization – American Section, a registered foreign agent that is heavily involved in illegal settlement expansion according to Israeli prosecutor Thalia Sasson.

According to Grant F. Smith, director of IRmep, the case for reregulating AIPAC as a foreign agent immediately is compelling. "AIPAC was designed to supplant the American Zionist Council as the arm of the Israeli Ministry of Foreign Affairs in the United States after the DOJ ordered the AZC to register as a foreign agent. As such, Americans should have full public access to biannual FARA registrations detailing AIPAC's publicity campaigns, lobbying expenditures, funding flows, activities of its offices in Israel and internal consultations with its foreign principals - particularly over such controversial issues as illegal settlements and US foreign aid."

Concerned organizations and individuals who wish to supplement the Department of Justice filing or participate in future negotiations with law enforcement officials should contact the Institute for Research: Middle Eastern Policy, Inc. at info@IRmep.org or 202-342-7325. IRmep is a private nonprofit that studies how warranted law enforcement and civil action can improve U.S. Middle East policy.

The Israel Lobby Archive
Posted by Maurice Pinay at 11:02 AM 1 comment:

Cardinal Dziwisz, JPII's assistant, the scoundrel who silenced Fr. Tadeusz Isakowicz-Zaleski from revealing the identities of 39 Communist secret police collaborator priests in the Archdiocese of Krakow, sanctifying the idol of Holocaustolatry at Yad Vashem, March 15, 2010. 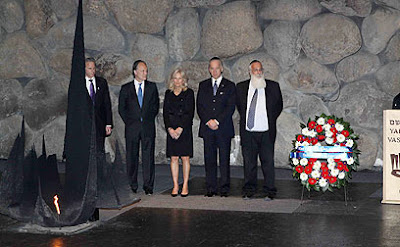 A rabbi, Tzvee Zahavy, who operates under the guise of a scholar, has written a comment on a text thought to be a lost section of St. John Chrysostom's homilies on the Jews:

The text from the "Silver[sic] Tongued" orator (died 407 CE) contains such gems as, "Now then, let me strip down for the fight against the Jews themselves, so that the victory may be more glorious—so that you will learn that they are abominable and lawless and murderous and enemies of God. For there is no evidence of wickedness I can proclaim that is equal to this."

We can only reiterate that scholarship aside, it is always hurtful for us to revisit how far back Christian antisemitism goes and what grave and unfathomable damage it has done to our ancestors.

What Rabbi Zahavy (evident in his censorship tactics) does not want discussed is the fact that the great sages of his religion, rabbinic Judaism, have taught hatred that has no parallel in the Christian canon and that many of these teachings originate centuries before the golden-tongued Church Doctor, St. John Chrysostom, when Christians were a fledgling minority persecuted by the synagogues. The great Rabbi Zahavy is well aware of the genocidal, racial-supremacist dictums of the monumental sage of rabbinic Judaism, Shimon ben Yohai, the Birkat ha-Minim and other hateful teachings of the rabbis which date as early as the 1st century A.D. But he doesn't want the am-haaretz discussing those those things because they interfere with the illusion he attempts to create of rabbinic Judaism as blameless, ultimate good and opposition to it as ultimate evil and insanity.

It seems to me that if Rabbi Zahavy is due sympathy for hurt caused by the writings of St. John Chrysostom which he suggests he experiences as he plays golf, writes, forms young minds at prestigious American universities and relaxes in the comfort of his New Jersey home, then the Palestinians of Gaza are due at least as much sympathy for the hurt they experience as their homes are destroyed and their family members are killed by Israeli soldiers ever more informed by the hateful teachings of the sages of Rabbi Zahavy's religion, rabbinic Judaism.

Isn't there a double standard at work here? Can it be that rabbinic Judaism is not an enlightened tradition; that it cannot withstand the same scrutiny commonly meted out to Christianity and Islam? Is that why the rabbi expects that his criticism of Christianity stand unchallenged? I've taken the time to study the matter and I believe the answer is yes.

It takes a special kind of Pharisaic chutzpah for a representative of the hateful religion of rabbinic Judaism to attack the Christian Fathers as hateful, but Rabbi Zahavy has it, and he seems able to persuade others to go his way, and I doubt it is by means of reason. But this will change, and indeed, it is changing. The internet is not Rabbi Zahavy's classroom.

The Rise of "Israel's" Military Rabbis

The Gaza Massacre was Perpetrated by a Religious Extremist Terrorist Organization

The World's Most Kosher Army

Rebranding the country without addressing the conflict is just plain stupid ... Unfortunately, Israeli governments tend to deal with this type of policy dead end by escalating the conflict or going to war.

Let history record that Pope Benedict XVI played the lead role in the futile effort to gloss over Israeli barbarity.