Flotilla attackers to feast in Rome

You can judge a man by the elder brothers that he keeps: 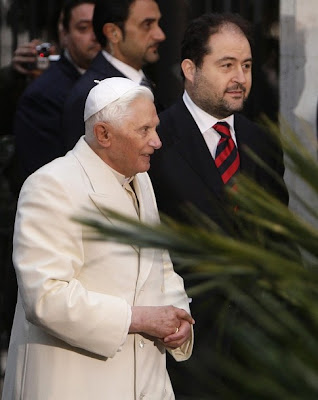 Benedict XVI with Riccardo Pacifici at the Synagogue of Rome, January 2010 where the Pope proclaimed, "How pleasant it is when brothers live in unity."

Flotilla attackers to feast in Italy

The leader of the Jewish community in Rome has arranged a recreational trip to Italy for two Israeli forces involved [in] a deadly attack on a Gaza aid convoy.

Riccardo Pacifici, chief of Rome's Jewish community, invited the Israeli navy troops to Italy during his visit to Israel, where he praised and lionized them as "heroes," IRNA reported on Monday.

Israeli commandos killed at least 20 human rights activists and injured 50 others during a May 31 onslaught on a six-ship fleet carrying 10,000 tons of humanitarian aid and 700 international activists from 42 countries to the besieged Gaza Strip.

Israel also arrested hundreds of the civilians on board the ships of the Freedom Flotilla, which was attempting to break the years-long siege of Gaza.

The campaigners were captured and forcefully taken into Israel from the international waters where they were attacked, but were soon released under international pressure on Tel Aviv not to deepen the crisis.

The attack sparked outrage across the globe and led to a chorus of calls for lifting the siege on the impoverished Gaza Strip.

Like Paul VI and John Paul II he is under blackmail? Or perhaps they have put him where he is.