Never again: Young journalists and seminarians gather to learn lessons of the Holocaust


This Wednesday (July 28) twelve Jewish, Christian and Muslim seminarians will join with three journalism students to begin a program aimed at exploring how their respective professions can derive valuable ethical lessons from the Jewish Holocaust of Nazi-era Germany.

Sponsored by the Museum of Jewish Heritage, the international learning event will send its participants to New York, Berlin and Poland (where the infamous Auschwitz network of extermination camps was located).

The students, all chosen by the Fellowships at Auschwitz for the Study of Professional [Talmudic, "Noahide"] Ethics (FASPE) will work with professors and religious leaders to develop a full curriculum planned to begin next summer.

Topics to be explored will involve the role priests played in the military at the time and in the Third Reich, how faith helped form the basis for resistance against the Nazis and how some non-Jews (honored by Israel as Righteous Among the Nations) risked their lives to save Jewish lives. The students will also examine the roles of Pope John XXIII and John Paul II (both of whom lived through the period) played in fighting anti-Semitism, as well as the nature of good and evil itself.

Father John Langan, who is managing the seminarians involved in the program is the Joseph Cardinal Bernardin Professor of Catholic Social Thought at Georgetown University and a member of the FASPE steering committee. He says he believes FASPE does important work because "it provides a lens that forces us to raise questions about institutional blindness."

Goldman notes that FASPE recently started a similar program for law and medical students. He says "The failures of the legal and medical profession during the Holocaust are well known. Lawyers were complicit in the murder of the Jews by enacting laws that went against the very purpose of the law: to protect the innocent, weak and fragile among us. Doctors violated medical ethics every day by experimenting on one people, sometimes in the name of science and other times out of cruelty. There was certainly enough human failure to go around. There are lessons for virtually every profession from the Nazi era. FASPE began with doctors and lawyers and it is now expanding to the clergy and to journalists."

The hope is that the overall FASPE program will equip future professionals with lessons from the past so that future holocausts and emerging tyrannies can be exposed and resisted.

BTW, if you happen to be in the New York City area, the Museum of Jewish Heritage - A Living Memorial to the Holocaust is located on the waterfront at 36 Battery Place in Manhattan's Battery Park City.

This is Vatican II "Religious Freedom" 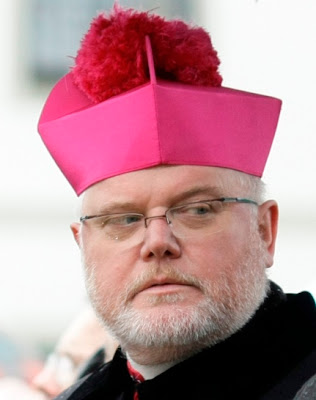 “Every denial of the Holocaust must be punished harshly.”
Posted by Maurice Pinay at 2:16 PM 5 comments:

Speculators set up a casino where the chips were the stomachs of millions. What does it say about our system that we can so casually inflict so much pain?

Complete falsification of the Gospel is the aim of these Catholic and Rabbinic ideological and spiritual heirs of the Pharisees:

"Jesus understands himself completely as a Jew. He was never baptized, he never had a First Communion ..." Stueckl told the AP at an interview in May. "Increasing awareness of this is very important to me."

By KIRSTEN GRIESHABER (AP) – 3 hours ago

A prominent American rabbi and the archbishop of New York said Friday that this year's production is more balanced than in the past, after the director removed several stereotypes that had raised concerns of anti-Semitism.

New York's Roman Catholic Archbishop Timothy Dolan and Rabbi Gary Greenebaum of the American Jewish Committee watched the play together Thursday in the Bavarian village where it has been performed for more than 400 years. They both told The Associated Press in separate phone interviews they agreed at a joint dinner during the play's intermission that the show was more sensitive than previous performances.

The two religious leaders lauded the passion play's director, Christian Stueckl, for his re-enactment of the suffering and last days of Jesus Christ.

"I have always been sensitive to Jewish concerns that the play could perpetuate the ancient and tragically unjust misunderstanding that the Jews are responsible for the killing of Jesus," Dolan said. "But thanks to the courage of the directors, the villagers and the Jewish leaders, the script has gradually been renewed."

Greenebaum said the American Jewish Committee and other Jewish groups had worked with the producers of the Oberammergau Passion Play since the 1970s to help them overcome anti-Jewish stereotypes. He said this year's performance "is more balanced than ever before and we need to appreciate the tremendous efforts that have gone into it."

The Alpine village of Oberammergau has performed the passion play for more than 400 years and it is considered the most famous one in the world. It is staged only every ten years, and roughly half of the village's population — some 2,500 people — perform in it.

Changes to the performance, which began in 1633 to fulfill a promise the village made to God if he were to end the Black Plague, are always hotly debated.

In this year's edition, Stueckl — who normally directs at Munich's Volkstheater — has altered the script and staging of his third Oberammergau Passion Play to make even clearer that the Jews at the time could not be held responsible for the killing of Jesus.

"Jesus understands himself completely as a Jew. He was never baptized, he never had a First Communion, but he celebrated his Bar Mitzvah at 12 and died as a Jew on the cross," Stueckl told the AP at an interview in May. "Increasing awareness of this is very important to me."

Greenebaum and Dolan, who went backstage before the play to chat with the actors, discussed the five-hour-long play over dinner during its three-hour intermission, then continued their talks for two more hours.

They are both involved in interreligious dialogue in the United States. Dolan is the co-chair of the Catholic-Jewish relationship for the U.S. Conference of Catholic Bishops, and Greenebaum is the U.S. director of interreligious relations for the American Jewish Committee, an advocacy group based in New York.

Still, they said some concerns remained.

The depiction of Caiaphas — the Jewish high priest whose blame for Jesus' crucifixion has long been debated by Jews and Christians — seemed to stick out.

"The high priest character is still the most difficult to watch for Jews," said Greenebaum. "He does do things that could be seen as stereotypical."

While not explicitly referring to Caiaphas, Dolan also said some scenes in the play still "may give impression that Jewish people at the time bear guilt with the crucifixion."

However, this year's production is a far cry from past performances, when Jew[ish Priests wore traditional Judaic pointed hats] and the Jewish crowd affirmed that Jesus' "blood be upon us and upon our children."

"The Oberammergau Passion Play is a paradigm for the friendship of Jews and Catholics, it has shown low points in their relation in the past, but now it has also become a sign of great progress," Dolan said.