Note the patience and care that goes into Vatican-'Israel' dialogue regarding Church properties in contrast to the 'dialogue' by which Church teaching is circumvented and overthrown.

AsiaNews (Tel Aviv) - On Thursday, the President of the State of Israel, will be received in Audience at Castelgandolfo by Pope Benedict XVI. In preparation for this appointment, the octogenarian Head of State told an interviewer on the First Channel of Italy’s public television (RAI): “The relations between the Vatican and the Jewish State are the best since the times of Jesus Christ, and have never been so good in two thousand years of history.” He added too: “The reigning Pontiff wishes to have a sincere dialogue with us, as we wish to have with the Vatican” ...

There is then still some way to go in order for the “dialogue” mentioned by President Peres to achieve its purposes completely. However, the forward-looking optimism of the President of Israel is promising, and in fact it seems that both Parties are working towards that goal and are making steady progress.

... Father David-Maria A. Jaeger, an expert on Church-State relations in Israel, tells AsiaNews: “Especially in the last few years, it appears that the negotiations, which in effect constitute this ‘dialogue’ – to which President Peres refers – between the Holy See and the State of Israel, are being pursued by both Parties with great seriousness and commitment, as is evident from the ‘Joint Communiqués’ released from time to time by the Bilateral Commission. Though without ignoring the problems in various sectors of the day-to-day relations between the Church and the State, optimism is obligatory, and such optimism in itself has a decidedly beneficial influence.” He adds too: “In the end, obstinate optimism endows the experience of daily life with an eschatological horizon.” 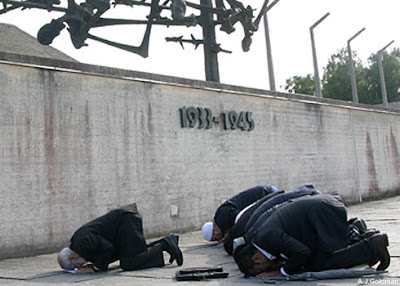 The pretense of this "reform" curbing liturgical abuse is a farce.

Opus Judei Glosses on the Talmudic Novus Ordo "Offertory"
Posted by Maurice Pinay at 3:13 AM No comments: 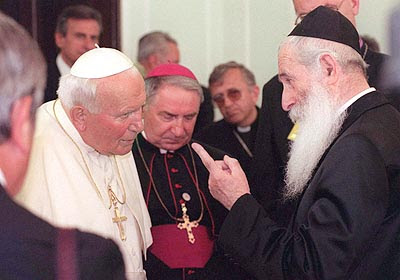 The Crosses of Auschwitz, Geneviève Zubrzycki
Posted by Maurice Pinay at 1:29 AM 1 comment:

The monumental chestnut tree that cheered Anne Frank while she was in hiding from the Nazis was toppled by wind and heavy rain on Monday.

The once mighty tree, now diseased and rotted through the trunk, snapped about 3 feet (1 meter) above ground and crashed across several gardens. It damaged a brick wall and several sheds, but nearby buildings — including the Anne Frank House museum — escaped unscathed. No one was injured, a museum spokeswoman said.

"Someone yelled, 'It's falling. The tree is falling,' and then you heard it go down," said museum spokeswoman Maatje Mostart. "Luckily no one was hurt."

A global campaign to save the chestnut, widely known as The Anne Frank Tree, was launched in 2007 after city officials deemed it a safety hazard and ordered it felled. The tree was granted a last-minute reprieve after a battle in court.

The 150-year-old tree suffered from fungus and moths that had caused more than half its trunk to rot.

Two years ago city workmen encased the trunk in a steel support system to prevent it from falling, but that failed under windy weather Monday.

The Netherlands' Trees Institute, one of the most prominent supporters of the preservation project, said it was "unpleasantly surprised" by the news of the tree's fall early Monday afternoon.

"On the advice of experts in tree care, it had been calculated that the tree could live several more decades" with the support structure, the institute said in a statement.

The institute said it didn't know why the support structure had failed.

Many clones of the tree have been taken, including 11 planted at sites around the United States and 150 at a park in Amsterdam. It is not clear whether a new tree will replace the original one on the same spot, since it rests on property belonging to a neighbor.

The Jewish teenager made several references to the tree in the diary that she kept during the 25 months she remained indoors until her family was arrested in August 1944.

"Nearly every morning I go to the attic to blow the stuffy air out of my lungs," she wrote on Feb. 23, 1944. "From my favorite spot on the floor I look up at the blue sky and the bare chestnut tree, on whose branches little raindrops shine, appearing like silver, and at the seagulls and other birds as they glide on the wind."

She also wrote: "As long as this exists, ... and I may live to see it, this sunshine, the cloudless skies — while this lasts I cannot be unhappy."

Anne Frank died of typhus in the Bergen-Belsen concentration camp in March 1945. Her diary was recovered and published after her death. It has become the most widely read document to emerge from the Holocaust.