with her pious, anti-scholarship, hypocritical blather. I propose a moratorium on intellectually void attempts at pinning Nazi crimes (real and imagined) on Christendom until there has been 60 years of equally intense examination of the relationship between Susannah Heschel's religion, rabbinic Judaism, and Israeli crimes against humanity. What are the chances of such a line of study bringing such fellowships, grants and honors as THESE?

... Christian theologians, Catholic and Protestant, reassured Germans that Nazism was in full accord with Christian principles. This was not a marginal effort; at the 1934 Oberammergau passion play, watching Jesus being hoisted on the cross, the audience saw a parable of the Third Reich, calling out: “There he is. That is our Führer, our Hitler!”

Hitler became Christ, the redeemer of Germany, thanks to a reinterpretation of the Gospels: Jesus was not a Jew, but an Aryan who came to redeem them from the Jews who sought their destruction. Karl Adam, the prominent German Catholic theologian, affirmed in 1933 that Hitler was the one “prophesied by our poets and our wise men” who suffered in his fight for Germany’s salvation. Adam continued in 1941: “Christ’s teaching was entirely anti-Jewish in its tenor (that is why he was crucified).”

Redefining Jesus as an Aryan began during the nineteenth century and intensified in the decades before and during the Third Reich. Jesus, theologians argued, was born in Galilee, an area populated, they claimed, by racial non-Jews, including Aryans from Iran; his message was welcomed by Galileans, in contrast to the Judean Jews who put him to death. Grundmann, together with theologians, pastors, bishops, students—both Protestant and Catholic—established the “Institute for the Study and Eradication of Jewish Influence on German Church Life,” financed by the Protestant church. They published a new version of the New Testament, purged of positive references to Jews and Judaism, redefined Jesus as an Aryan Galilean, and downplayed the role of the Jewish apostle Paul. In addition to their New Testament they distributed a dejudaized hymnal and catechism to churches throughout the Nazi Reich. Grundmann argued that Jesus’ intimacy with God established a morality that was utterly opposed to the law-based morality of Judaism—laws that forbid murder, for example—presumably in case Christians had qualms about Nazi orders to do just that.

No religion advocates murder [Susannah Heschel's religion, rabbinic Judaism, does], though plenty of religious leaders across the centuries have justified horrendous acts through their manipulative readings of scriptures and history. One of the most egregious and best-documented examples is, of course, the behavior of German Christians during the Third Reich. Pope Benedict could gain the respect of world opinion by acknowledging what historians have amply demonstrated: that well-intentioned, pious Christians—and not just atheists—committed heinous acts. Christian teachings are no guarantee against atrocity and, in the context of the Third Reich, actually came to justify the Holocaust. (Susannah Heschel, "Atheist Nazis? The Pope’s Cheap Atonement," Religion Dispatches,
http://www.religiondispatches.org/archive/politics/3374/atheist_nazis_the_pope’s_cheap_atonement_/

Rabbi Abraham Heschel: "I Want to Attack Their Souls"

The Dialogical Path Towards Disaster
Posted by Maurice Pinay at 9:36 PM No comments:

Rome has been a host to pro-abortion rabbis and their pro-abortion religion (see: Judaism Discovered, 878-885) for many centuries. 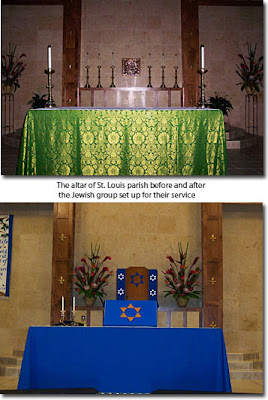 AUSTIN, TX, September 15, 2010 (LifeSiteNews.com) – Rabbi Alan Freedman is a big name in the abortion industry in Texas; according to his information page at Temple Beth Shalom, he is currently “serving on the Board of Planned Parenthood in Austin.” The Planned Parenthood website confirms the fact. Despite this, the rabbi has been given permission to hold Jewish religious services at the St. Louis Catholic Church in Austin Texas. Next Saturday, the Catholic Mass will even be relegated to the chapel, while the Jewish service, led by the Planned Parenthood rabbi, meets in the main body of the Church ...

Fr. Covington said that the “parish's hospitality to Temple Beth Shalom for the celebration of the Jewish High Holy Days of Rosh Hashanah and Yom Kippur” was undertaken with the “permission of the diocesan [Opus Judei affiliated] Bishop [Joe S. Vasquez].”

"The lies were like the lies of a 7-year-old"

"... my impression was the people were making statements that indicated they never expected to be questioned," Rachel's father told TIME. "The lies were like the lies of a 7-year-old." ("Israel's Military on the Spot Over Activist's Death," Karl Vick, Time, Sept. 9, 2010)

For updates on the Rachael Corrie trial, see:

Mondoweiss: I know a ton of old lefties, wheat-grass drinkers, and painters in falling-down houses that went to Bard, but

Tikkun Olam is a Tribal, not Universal, Concept

[Abraham] Foxman acknowledged that he’d taken a swipe at the concept [tikkun olam, repairing the world] at last year’s Jewish People’s Policy Planning Conference but said that his problem was not with tikkun olam as a value but with its current ubiquity in religious discourse. “What I’ve been critical of is those who have sold Judaism as, ‘All you have to do is love universally and that’s Judaism,’ ”Foxman said. “It’s not—it’s ersatz Judaism. It’s Judaism lite.” It also, Foxman added pointedly, has the potential to elevate political action on behalf of others while brushing past the theological significance of acting on behalf of Jews. (Marissa Brostoff, "Beyond Repair," Sep 3, 2010, The Tablet)

Judaic Activists Set Sail for the Cause of Tribal Universalism?

Joint "Judeo-Christian" efforts at "repairing the world" (such as THIS) ultimately serve rabbinic interests.

The Judeo-Christian racket is intended only to convert Christians into "Noahide" servants. See:

USCCB States Principles for "Dialogue" Fraud
Posted by Maurice Pinay at 10:59 AM No comments: