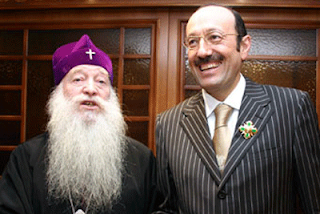 Orthodox Archbishop Antoniy (left) and EAJC president Alexander Mashkevich
The 'Russian' oligarch, Alexander Mashkevich who strips the wealth and resources from Eastern Europe and Africa into his Swiss bank accounts but "wasn't doing anything amoral" on a boat with 'underage prostitutes' in late September 2010, is (who knew?), a heavy hitter in the interfaith dialogue racket. At an October 2009 World Jewish Congress conference, "PHASE II STRATEGIC FORUM: IN DEPTH ANALYSIS" he candidly offered his thoughts on interfaith dialogue:

"... there is a very important topic – dialog ... I think that maybe the most primitive, but most effective mechanism how we can do it, we have to find a way, we have to push religious leaders to say some words, which are positive to Jews. And we have transfer, we have to deliver these words to simple people. If, let say, Pope, whoever, or Imam or I don’t know who, has to be top level religious people – they have to say good words about Jews. How we could achieve it? It is our target, our job. I will tell you later what we do in this way. But we have to do it not only in a room, we have to do it through media to deliver it to hundreds millions, so when simple people hear what the leaders are saying, believe me, they follow their leaders."

Machkevich gives an example of this 'dialogue' explaining how he bought off Russian Orthodox Church leaders to such a fantastic degree that Orthodox Church representatives bestowed on him the order of Saint apostle Andrey Pervozvanny, Protector of Russia and publicly proclaimed, "God gave to you, to your people this land ["Israel"]. You have no right to give to the Palestinians even one piece of this land.”

"I will tell you an interesting story. I built myself five Orthodox churches. Five. And they are not small, they are big, big – thousands people could come to one church."

The nice things that Mashkevich buys as part of his 'dialogue' with faith leaders come with strings attached, as you may have guessed. We saw one such example in Astana, Kazakhstan, July 2009 when Mashkevich and his crony, Kazakhstan President Nursultan Nazarbayev hosted a "World Council of Religions " and brought in Israeli terrorist, Shimon Peres as a surprise keynote speaker. The surprise was not a welcome one. See:

Peres [scheduled to give a] speech ... before an inter-faith panel in Kazakhstan in which hundreds of Muslim leaders and religious figures from the Middle East and the world will participate. The chief rabbis of Israel and the minister of religious affairs will also be in attendance.

The forum is being organized by the Kazakh government together with the Euro-Asian Jewish Congress.

WORKSHOP ON "MORAL AND SPIRITUAL VALUES, WORLD ETHICS" DURING THE THIRD CONGRESS OF LEADERS OF WORLD AND TRADITIONAL RELIGIONS IN ASTANA, KAZAKHSTAN, 1-2 JULY 2009

From the Telegraph UK:

A spokesman for Alexander Mashkevich, who co-founded the FTSE 100 miner and still owns 14.6pc of the company, confirmed to The Daily Telegraph yesterday that the businessman was present on the boat but not one of those arrested.

"He was on board," said Roman Spektor, the Kazakhstani billionaire's spokesman.