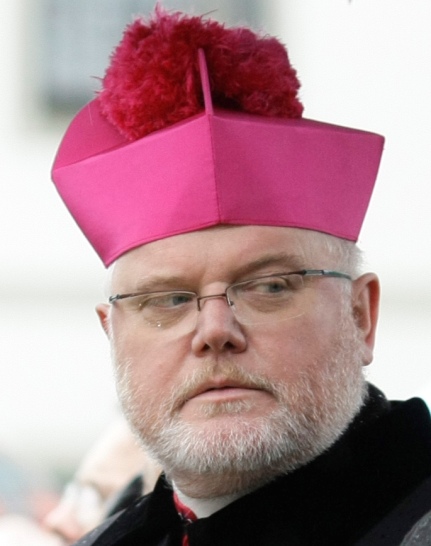 In January 2009 Archbishop Reinhard Marx proclaimed, “Every denial of the Holocaust must be punished harshly.” Now here's a man who really knows how to get ahead in the world! He now will take his place among the 120 of the Knesset of Cardinals (the arrangement concocted by the Ephod-wearing Paul VI) which advises and elects popes.

They were among 24 new cardinals named by Pope Benedict XVI in St. Peter’s square, Rome. Cardinals, sometimes known as “princes of the Church,” are advisers to the Pope but their key job is electing the pontiff.

Marx and Brandmüller will be officially elevated to cardinals on November 20. It was long expected that Marx, who has been Archbishop of Munich and Freising for two-and-a-half years, would be made a cardinal.

Since 1914, every Bishop of Munich and Freising has been appointed to the job. Marx, 57, becomes the 10th. His predecessor but one was Joseph Ratzinger, now Pope Benedict.

Brandmüller was for many years president of the Papal Commission for History – essentially the Vatican’s chief historian. Because he is 81-years-old, he is no longer eligible to vote in Papal elections – a right that cuts off at age 80.

The conclave that votes for the Pope will now be made up of 120 cardinals. The new appointments will bring to eight the number of German cardinals.

Posted by Maurice Pinay at 3:46 PM