The below is an outright lie. There is no guarantee of equality for Christians or any non-Judaic citizens under Israeli law which Israel Shahak described as, "a weird mixture of advanced democracy and retrogressive discrimination, combined with clumsy attempts to hide the discriminatory reality." However, if Shahak was alive today, I believe his "advanced democracy" assessment would be tempered further by an acknowledgment of the ascendancy of racial supremacist Orthodox Judaism in the Israeli state.

According to Rabbi Rosen's stated standard (which he apparently intends to be applied only to Arab nations), Israeli society is sick.

“The degree to which Christians enjoy civil and religious rights and liberties testifies to the health or infirmity of the respective societies in the Middle East,” said Rosen, adding that In Israel Christians “enjoy full franchise and equality before the law.” 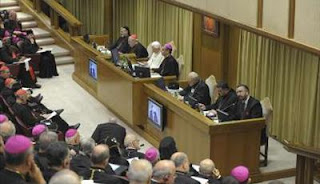 Rabbi David Rosen (R), International Director of Interreligious Affairs of the American Jewish Committee and the Heilbrunn Institute for International Interreligious Understanding, speaks during the synod for the Middle East bishops in the Paul VI Hall at the Vatican October 13, 2010. REUTERS/Osservatore Romano

ROME (EJP)---Rabbi David Rosen, the American Jewish Committee’s international director of interreligious affairs, was Wednesday the only Jewish speaker at a two-week Vatican Special Synod of Catholic leaders on the Middle East.
In his speech, he outlined a Jewish perspective on the state of Christianity and Jewish-Christian relations in Israel.

While this is not the first time a rabbi adresses a Vatican Synod it is the first time a Jewish representative has been asked to address a topic of social and political concern and sensitivity, the AJC said.

Hailing the “blessed transformation” of the relationship between the two faiths over the past 50 years, Rosen stressed that the strongest Jewish-Christian relationships are in the United States.

“The U.S. boasts literally dozens of academic institutions for Christian-Jewish studies and relations, while there are perhaps only three in the rest of the world,” he said.

In contrast, a major hurdle to deepening mutual understanding is the lack of opportunities for Christian-Jewish interaction around the world.

“I confess to having been surprised to find Catholic clergy, and sometimes even hierarchy from some countries, not only ignorant about contemporary Judaism but often even about Nostra Aetate itself,” Rosen said.

At the same time, he noted what he called “widespread ignorance” about Christianity in the Jewish world, notably in Israel.

“Until recently most of Israeli society has been quite unaware of the profound changes in Catholic-Jewish relations,” said Rosen, though he acknowledged that “this situation has begun to alter significantly in the last decade.”

Rosen said the improvement was due firstly to Pope John Paul II’s visit in 2000, and, secondly, to the influx of Christians, part of the wave of immigrants from the former Soviet Union, that doubled the Christian population in Israel.

Initiatives have flourished with “dozens of bodies promoting interreligious encounter, dialogue and studies in Israel, and the Christian presence in these, which include Jews and Muslims in Israel, is disproportionate and highly significant,” said Rosen.

“The wellbeing of Christian communities in the Middle East is nothing less than a kind of barometer,” he said. “The degree to which Christians enjoy civil and religious rights and liberties testifies to the health or infirmity of the respective societies in the Middle East,” said Rosen, adding that In Israel Christians “enjoy full franchise and equality before the law.”

Posted by Maurice Pinay at 7:42 PM