"Sharia law is coming ... the Crescent is rising," says The Remnant's Michael J. Matt. And how does he know this? Because in Minnesota, "Somali employees began refusing service to Minnesotans attempting to purchase bacon from the frozen food departments of local Target stores" and "[i]n addition, the Minneapolis Star Tribune reported on more than 5000 cases of Somali cab drivers refusing to pick up fares that failed various Sharia litmus tests."

Whatever threat these minimum wage-earning Muslim immigrants may constitute I think it safe to call it negligible in comparison to a threat that Mr. Matt and his Remnant Resistance is conspicuously mute on: the coming of the 'Noahide' Laws and the rise of the Hexagram.

The Chief Rabbinate of the Israeli state which was able to force the Pope to alter the traditional Catholic liturgy HERE and to recognize Judaism's oppressive legal system, the so-called 'Noahide' Laws HERE, has what one might call real power.

While it might seem like a threat to Michael Matt if a poor immigrant won't serve him bacon or allow his dog into a taxi, an element that has the power to get the Pope to hack and slash traditional Catholic teaching is the greater threat to Catholics by a cosmic margin. How has Michael Matt and The Remnant Resistance missed this?

Is the Crescent rising? Perhaps it's rising in a Minnesota Mosque attended by the Target store workers and taxi drivers that Mr. Matt fears, but the Crescent hasn't risen nearly as high as the Hexagram on the Pope's mitre. 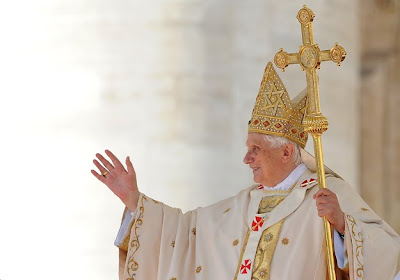 Muslims haven't pressured the Church to rewrite its liturgy and teaching materials, to apologize for its past and abandon many of its Saints and their teaching.

Muslims aren't saturating our airwaves with attacks on our religion, morality, governing principles and culture.

There is no Muslim equivalent to Thomas Friedman selling the 'Noahide' Laws in the pages of the New York Times.

There is no Muslim equivalent to AIPAC, WJC, AJC, ADL, JPPPI, UJA, and the hundreds of other such Judaic power organizations and the pressure they bear on world governments, religious institutions, media and academia.

There is no Muslim equivalent to Chabad Lubavitch or Agudath Israel and the power they wield.

There is no Muslim equivalent to the 30' tall Menorah that appears on the White House lawn each Hanukkah.

There is no Muslim equivalent to Benjamin Netanyahu pulling the strings of our president.

There are no equivalent Muslim subversives to Gregory Baum pushing Christians to scrap the Gospel of our religion and replace it with a crude counterfeit.

Muslims don't force Western governments to imprison their citizens for doubting atrocities committed against them, much less overblown exaggerations.

It's not Muslims who force multiculturalism on Western nations while championing ethnic and racial purity for themselves.


You are the salt of the earth. But if the salt lose its savour, wherewith shall it be salted? It is good for nothing any more but to be cast out, and to be trodden on by men.

Indeed, the salt has lost its savour; the earth is no longer salted. We're being trodden upon by men but it's not minimum wage-earning Muslims.

It's never too late to turn back. If we've forgotten what it means to stand for beliefs and principles then perhaps we might benefit from the example of these poor immigrants that Michael Matt so fears.
Posted by Maurice Pinay at 6:59 PM

Then again, one doesn't close a hole by opening another.

Many Traditional Catholics, especially in the USA, never tire of warning the rest of us of the impending One World Government under the United Nations. The UN has censored "Israel" under any number of resolutions which have been ignored. Other issues conerning "Israeli" wrongdoings,that reached the UN Security Council have been vetoed by the USA. This One World nonsense is another smokescreen for the reality of the global domination of the Zionists. Remnant, CFN ... ah well ...what should we say ??? !!!

The good news is that the readership of The Remnant has plummeted. With what handful of slow learners does their double-minded schizophrenic "Catholicism" resonate?

Who would be surprised if we eventually learn that "rabbis of good will" ['scuuuze me while I vomit] fund The Remnant?

If closing holes is the concern it's more efficient to focus on the cause of the holes than their effects. There's limited wisdom in the story of the Dutch boy putting his finger in the hole in a dike. It doesn't tell us how the hole got there.

The Kingship of Christ and the 'Holocaust' religion cannot coexist. The Remnant Resistance is not resisting Holocaustianity, not in society in general, not in Churches, schools, universities or seminaries. Their resistance is no resistance. It would be less harmful to do nothing than perpetrate a hollow illusion of resistance.

And the Remnant is not only mute on the ascendancy of Auschwitz to the place where Calvary should be, its an accessory through its attack on "Holocaust deniers."

Then perhaps we might make an effective stand against the ideology punching holes in immigration policy among the myriad of other holes in the material of our religion and culture.