World 'Jewish' Congress President, Alexander Mashkevich to take time away from predation of Russian and Ukrainian children; strip mining the wealth of East Europe and Africa and buying off Orthodox church leaders to start a 'news' network that will 'tell the truth' about 'Israel.'

Dr. Alexander Mashkevich announces plan to form pro-Israel international news network. 'It won't be a propaganda channel, but will simply tell the truth,' he tells Ynet during Jewish leaders conference

WASHINGTON - Dr. Alexander Mashkevich, president of the United Israel Appeal's annual conference of Jewish leaders in Washington, has announced his plan to form a pro-Israel international news network, similar to al-Jazeera and the BBC.

This year's conference focused on attempts to deal with the de-legitimization campaign against Israel, and was attended by some 200 Jewish community leaders and key philanthropists.

An announcement on the creation of the international news network was made at the end of the conference, with the aim of dealing with anti-Israel defamation in the media and influence public opinion.

Mashkevich, who also serves as president of the Euro-Asian Jewish Congress, said that the network would offer programs in English, French, Arabic and Spanish, focusing on news only.

"My intention is not to create a propaganda channel," he told Ynet, "but simply a channel telling the truth.

"Unfortunately, in the current situation most channels simply don't tell the truth about Israel," he explained. "Every day that passes we lose the battle for Israel's image. I am sure that Goldstone is a decent person, who didn't want to damage Israel consciously and intentionally, but if everything he gets from the media every day is anti-Israel propaganda, I assume it's hard to make the right decisions." 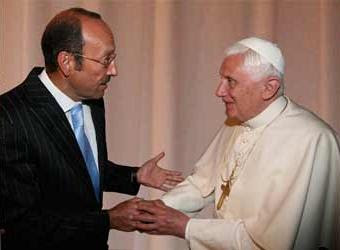 After years of foolishy carrying water for them, Glenn Beck barely got a glimmer of truth and so now he has plenty of time on his hands.

Maybe Mashkevich can give Beck a job as a footstool at his guzmah network.

Isn't the entire world media already in the hands of the Zionists? So of what use is this proposed new network?

Mashkevich, a citizen of the Republic of Kazakhstan, made his fortunes in Kazakhstan selling natural resources of that nation and paying workers in his factories in Kazakhstan meager u$450/mo whihc is not enough even to buy food for a family. Savings millions by exploiting and abusing the working people in Kazakhstan, Mashkevich is helping "poor" Israelis and tries to improve their image. How ironic...