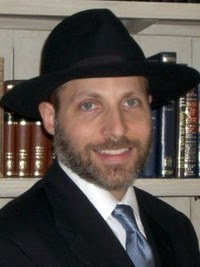 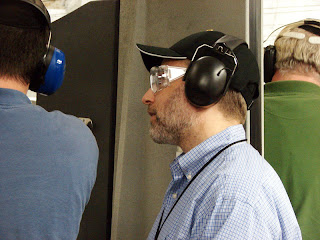 This afternoon, September 23, 2011, alternative media host Alex Jones provided an open platform for Orthodox Rabbi Dovid Bendory. "Gun Rabbi" Rabbi Dovid Bendory wears many hats, among them, Vice President at Goldman Sachs. This important detail wasn't mentioned to Alex Jones' listeners because many of them are clued into the Goldman Sachs pirate organization and its role in the world financial collapse.

Rabbi Bendory's byline for an article of his published by the Journal of Talmudic Law and Finance credits him as, "Vice President of Risk Management Technology at Goldman Sachs in New York City where he has worked for the past 15 years." At Onesource his title is given as, "Vice President Pwmgt Information Technology Group of Goldman Sachs Execution & Clearing." At the website of his Talmudic Pidyon organization in his autobiography he lists his day job as, "financial strategist at a bank in New York." At another of his Pidyon websites he lists his occupation as, "financial strategist at Goldman, Sachs & Co. in New York." At the website of the Rabbinical Council of America of which Rabbi Bendory is a member, his occupation is given as, "Software Engineer at Goldman, Sachs & Co. in New York."

It would be interesting to know if Rabbi Bendory, apparently a software engineer, is involved with the software that Goldman Sachs uses in its "front-running" market-cheating mechanism. The Execution and Clearing division of Goldman Sachs, where Rabbi Bendory apparently works, is where this illegal, predatory software-based scam takes place. Whatever the case, it is evident that Rabbi Dovid Bendory works with one of the most exploitative, predatory financial institutions in the history of the world, Goldman Sachs, and is profiting from its savaging of the world economy. Alex Jones' listeners should be made aware of this; they should know that this deceiver masquerading as a patriot "Gun Rabbi" is really The Wall Street Rabbi (he teaches Talmudic Law (halacha) at the Wall Street Synagogue daily). Rabbi Bendory's "Gun Rabbi" website, which is obviously intended to draw a largely non-Judaic, truth-seeking, right-wing, libertarian  audience, doesn't mention anything about Goldman Sachs or Wall Street for obvious reasons.

The interview Alex Jones gave this Rabbi-Banker, Dovid Bendory can be downloaded HERE and begins at around 10 minutes 15 seconds. The pretense of the interview is that "Gun Rabbi" Bendory is a great advocate of 2nd Ammendment rights but the interview quickly becomes a showcase for Rabbi Bendory's Talmudism and Zionism. Alex Jones even goes along with Rabbi Bendory's ruse of support for blacks, even as he approvingly cites the anti-black racist (and anti-Christian, anti-"Goy"), Rabbi Moses Maimonides (allegedly and strangely) in support of the 2nd amendment of the U.S. Constitution. Jones invited this predatory banker-rabbi to return to his show for a full hour at a later date. Why is Alex Jones giving this racial-supremacist Orthodox Rabbi and predatory banker a platform to ingratiate himself with his largely non-Judaic audience for his  Judeo-supremacist purposes?

Posted by Maurice Pinay at 6:36 PM

In all such cases of talk radio where the host takes calls on the air, as Jones does, critics should attempt to call in and get on the show live. If the call-screening prevents that, then that fact can also be publicized.

I attempted to leave a comment about Bendory here:
http://wp.alexjonespodcasts.com/2011/september-2011/friday-9-23-2011-the-alex-jones-show-with-david-bendory

It's rather obvious what jones' agenda is when you look at his behavior with regards the Jeff Rense and Michael Rivero, both outspoken critics of the zionist evil that controls so much of our poor world. I simply do NOT trust jones!

ALex Had this Rabbi on for 5 minutes and all he talked about was gun rights, you all act like it's some Zionints conspriocy and it's totally absurd. If you want to discredit Alex talk about his view on Palsetinian Statehood which is He doesn't care. Well does it make any sense that he cares about everything else he talks about but then doesn't care about Israel's crimes against Palestine? Ofcourse that makes no sense.

My friend (putting aside the fact that this scoundrel was given 20 minutes and invited back for a full hour), for a Goldman Sachs VP/Wall St. Rabbi/Zionist fanatic to put on a patriot costume and song and dance for the victims of his criminal mob in order to win their favor and support is so outrageous it's evidently gone completely over your head.

This outrageous, mocking aspect of the Judeomasonic tradition is exceedingly difficult for outsiders to comprehend.

Michael Hoffman has it right, lets stop crying on blogs and forums and call into his show and bring up this information.


I did and it worked great! (youtube - prothink vs alex jones)

Do you know how many NJ (USA) democratic politicians either work for or linked to Goldman sachs. There might be republicans but I'm not sure. Alot from novus ordo..

Most novus ordo is all about money, power,etc...

Anyone who claims to have witnessed the cremation of care ceremony in the California woods and survived to tell the tale is either a liar or an insider who is part of the agenda.