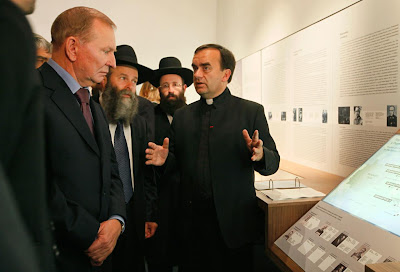 Fr. Desbois and his elder brothers in the fraud with former Ukrainian President Leonid Kuchma at the Kiev stop of his "Holocaust by Bullets" roadshow
Dr. Robert Faurisson has recognized Fr. Patrick Desbois as the "world champion of holocaustic bluff ... one hell of a trickster whose various productions dedicated to 'the Holocaust by bullets,' notably in the Ukraine, seem to have reached the very peaks of Judeo-Christian media hype."

Dr. Faurisson's explanation of Desbois' flim flam can be read HERE. I have written about the 'Holocaust' hawker, Patrick Desbois HERE and HERE. Fr. Desbois and his travelin' 'Holocaust' show has the full support of Cardinal Jean-Pierre Ricard (of the Eclessia Dei Commission which oversees all things related to the traditional Latin Mass and 'regularization' with the SSPX) and Pope Benedict XVI.

The people of Kiev deserve an apology for the Judeo-Bolshevik terror and genocide perpetrated upon their ancestors by the ancestors of Patrick Desbois' eternally holocausted brothers in the faith, but instead they're visited by Desbois' mobile guilt chamber. Such is the the state of Catholic evangelism in 2011. Run for your lives away from these villains.

The establishment press only runs puff pieces for Fr. Desbois. I've made the necessary corrections below:

KIEV, Ukraine (AP) — An exhibition focused on [an unsubstantiated claim of a] massacre of 1.4 million [Yiddish folk] in Soviet Ukraine opened in Kiev on Thursday, featuring a [disparate] display of [alleged] Nazi bullets, photographs of bones [alleged to be Judaic] and tearful [alleged] witness testimonies, [lots of 'witness testimonies' as we've come to expect in support of an alleged genocide of unprecedented scale for which scant material evidence exists].

The exhibit is based on the work of [a] French Catholic Priest [who has no training in forensic investigation, but does have a love for Talmud and burning zeal for Holocaustolatry] Patrick Desbois, who has been canvassing Ukrainian villages on a quest to [claim every mass grave in East Europe and many more imaginary ones as being filled with Judaic corpses] shot by Nazi soldiers and their collaborators during ['The Holocaust'. The exhibit does not mention the millions of Ukrainian people killed by Judaic Bolsheviks and later systematically starved to death. Indeed, it endeavors to count Christian Ukrainian mass graves as being filled with 'Jews.']

"Each Jewish person deserves to be buried and reintegrated into humanity," Desbois said, ["but not non-Jews and especially not Ukrainians.] We cannot live like predators next to mass graves ... building modern societies on the graves of people that we assassinated, [except in Israel because The Jews aren't bound by Goy standards."]

[The Judaic establishment's court historians] say some 1.4 million of Soviet Ukraine's 2.4 million [Yiddish folk] were executed, starved to death or died of disease during World War II. [They don't say anything about the tens of millions of East European Christians who were executed, starved to death or died of disease prior to, during and after World War II because their careers would be terminated. Judaic] remains are [alleged to be] strewn around the country in common graves, many of them [memorialized by Patrick Debois and the multimillion dollar 'Holocaust' 'Museums' around the world, books films, liturgies, articles etc. ad nauseam. Christian mass graves from that time period] are largely ignored [particularly so by Patrick Desbois] and unmarked.

[According to the new-and-improved version of holy 'Holocaust' writ, an alleged] shooting slaughter of [Judaic people] in Ukraine, Belarus and Russia was the opening phase of what [is alleged to be] the Nazis' Final Solution [a concept conjured up after the war by 'Holocaust' propagandists] with its [spooky and sinister, as seen in the movies] factories of death [depicted as] operating in Auschwitz and other camps in Nazi-occupied Poland [according to 'Holocaust' books and dramatizations].

[Court historians say the] campaign began after Germany invaded the Soviet Union in June 1941 and [holy 'Holocaust' writ proclaims the "Holocaust' of bullets"] epitomized by Babi Yar, a ravine in the capital Kiev where [Allied atrocity propaganda, and subsequently, holy 'Holocaust' books and films declare that] Nazis killed about 34,000 [Judaic people by lining them up in front of a pit that they were forced to dig themselves, shooting them and then covering the bodies up with hand shovels] during just two days in September 1941 [despite the absurdity of the claim and no physical evidence supporting it. Due to pressure from Judaic power organizations] Ukraine will mark the 70th anniversary of [this mythical Judaic calamity] later this month [because it's a fundamental element of Judaic tradition to 'remember' countless persecutions 'the Goyim' have perpetrated against them for no reason except that "they are 'Jews." Also due to pressure from Judaic power organizations, no similar memorials are held for the Ukraine's own victims of Judaic mass murderers because it's fundamental to Judaic tradition to blot out persecutions of non-Judaic people except where they're expedient to pit non-Judaic tribes against each other].

Desbois [is figurehead of] a [rabbinic] Association Yahad-in-Unum, (the Hebrew and Latin words for "together"), which was founded by [Vatican prelates and their brother rabbis] to [guilt-bash and Judaize Catholics]. He has [conjured] the [myth], "Holocaust by Bullets," and [with full support from the Vatican, brought his mobile guilt chamber to] Paris, New York and other cities.