The perpetual Purim Spiel of Judaism and its worship of the goddess with ten thousand names is a production on a massive scale.

"Venus Rising From the Sea" 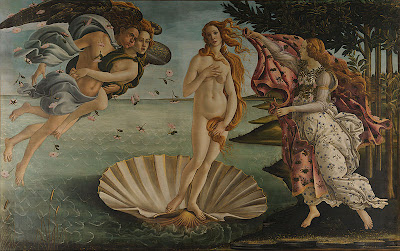 "The Birth of Venus" (Note the mermaid appearance of the legs and feet splayed out in the shape of a mermaid's tail fin)
Like "Operation Desert Storm" with its 'Shock and Awe' doctrine, a phonetic allusion to the 'Shekinah' of rabbinic Judaism, the invasion of Libya was launched on the same day of the rabbinic calendar, Purim, the rabbinic day of vengeance, based in the book of Esther.

According to Dr. David S. Dockery:


"Esther" is probably derived from the Persian word stara, meaning star. Some scholars have related it to "Ishtar," the Akkadian goddess associated with the planet Venus. (Holman Concise Bible Commentary, p.190)

In the genocidal Zohar, "Esther" is interpreted as the "Shekinah," the female counterpart of the male En Sof of the pagan hermaphrodite god of Judaism. To falsely maintain prestige as 'God fearing' 'people of the book;' alleged 'descendants of Abraham' who Christians should honor as 'elder brothers in the faith,' for obvious reasons the rabbis and their followers have tightly guarded this aspect of their religion:

For [rabbinic] mysticism, the greater the treasure [or shonda!], the greater the blockades to reaching it. The pardes or mystical garden in which the 'there is' (yesh) might be encountered, is heavily gated. For this tradition, especially in the late twelfth- or early thirteenth century, additions to the Zohar (see Ra'ya Mehemna and Tikkunei Zohar), the obvious obstacles to a theological reading of Esther become portals onto a mystical book of hiding. In them both Esther and the King are manifestations of the divine. Esther is adorned as Shekinah, divine presence, coupled with the k/King in the palace garden/Garden of Eden, signifying the end of exile. (The book of hiding: gender, ethnicity, annihilation, and Esther, Timothy Kandler Beal, p.140)

The goddess has traditionally had a strong presence in the cultural crossroads of the Mediterranean region evidenced by Botticelli's "Birth of Venus" (commissioned by the Medici banking predators and subverts of the Vatican). The prime benefactors of the the "Stella Maris," "Our Lady of Victory" were the banking plunderers of Venice and their puppets in the Venetian Senate*. I don't believe it a stretch to see the same old psychodrama being orchestrated once again in "Operation Mermaid Dawn" just across the Mediterranean in Libya.

Haven't Christians had enough of these bloody schemes to get them invested in securing "The Holy Land?"

*"Non virtus, non arma, non duces, sed Maria Rosari, victores nos fecit." This endorsement of Marian devotion from the Venetian Senate carries about as much weight as the words of Zionist banker's puppets Newt Gingrich, Nancy Pelosi, et al with this author.
Posted by Maurice Pinay at 12:04 AM

"Like "Operation Desert Storm" with its 'Shock and Awe' doctrine, a phonetic allusion to the 'Shekinah' of rabbinic Judaism,..."

More than that, the Cabalistic paradigm according to Ari Luria and via the pretended pacifist Einstein of nuclear poisoning, in this case, of Baghdad and Iraq at large that was encompassed at the same time and by some of the warheads used in "shock and awe" is in keeping completely with Likkudnik total disregard for God and His law and our fellow human beings, as they so amply demonstrated upon Palestinian infants and children in Gaza.

In the King James Version of the bible I have, there are a total of 39 “books” in the Old Testament. One of the most revealing of all these is the Book of Esther, which, more than any other, lays bare the essence of the Jewish program, and the workings of the Jewish mind. It is the favorite book of the Jews. Nowhere throughout this book does the name of God even appear.

A Ukrainian American wrote that years ago, he was an atheist at the time, but he was spot on.

I just came across the comments about Operation Mermaid Dawn in Libya starting on Purim (20 March in 2011). My understanding is that OMD started in August.