This would rightly be viewed as a continuation of the millenia-long Orthodox Judaic tradition of mocking the Gospel; a "Toledoth Jeshu" in scholarly guise. The Gospel-mocking "Toledoth Jeshu" has never been retracted or apologized for. It is still published by the Pope and bishops' brothers in the anti-Christ faith. 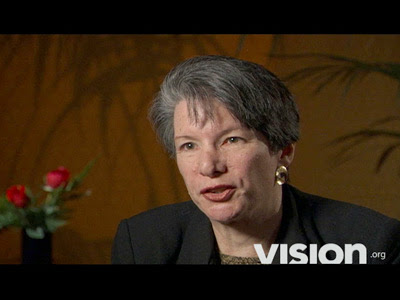 The book [Orthodox Judaic subverter of Christianity in the disguise of a scholar of Christianity, Amy-Jill Levine] has just edited with a Brandeis University professor, Marc Zvi Brettler, “The Jewish Annotated New Testament” (Oxford University Press), is an unusual [allegedly] scholarly experiment: an edition of the Christian [New Testament] edited entirely by [so-called] Jews. The volume includes notes and explanatory essays by 50 leading [scholars of rabbinic Judaism], including Susannah Heschel, a historian and the daughter of the [Rabbi] Abraham Joshua Heschel [who wanted to attack Christian souls]; the Talmudist Daniel Boyarin; and Shaye J. D. Cohen, who teaches ancient Judaism at Harvard...

Posted by Maurice Pinay at 1:31 AM

This (as well as Mr. Pinay's post on the Jewish seminary at Toronto's University of St. Michael's College) provides yet more evidence of the deliberate and foul Judaization of the Church and her institutions (a literally devilish process, in which so-called Catholics are not only willing, but also eager, participants). If it weren't for the promise of Our Lord that the gates of hell will never prevail against His Church, I would observe that they already have!

Anyway, all good and true Catholics should avoid "The Jewish Annotated New Testament" as though it were bound in the skin of sacrificed Christian children. Indeed, I urge my fellow Catholics to be in possession of one, and only one, edition of the Bible -- the Douay-Rheims.

Well, now that they've published a feature highlighting this rare "Jewish perspective on the New Testament," perhaps now they'll do a feature on Michael Hoffman's "Judaism's Strange Gods," since it too is a rare publication of a Christian perspective on Judaism.

We should all email the columnist and ask that they balance their promotions evenly.