Holocaustian Megalomaniac, Bernard-Henri Levy likely overstates his role in setting up NATO's Purim 5771 ritual vengeance against Libya, and understates his knowledge of the background of the terrorist "rebels" he hooked NATO up with. 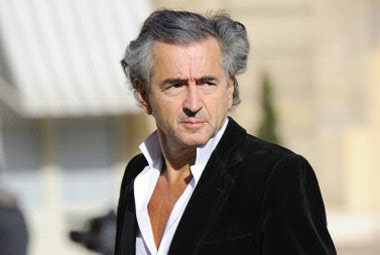 This insufferable clown is pawned off as a "Philosopher;" a "French Intellectual" by 'Noahide' France's overlords
My corrections to the following puff piece for this charlatan are interspersed:

... That [Bernard-Henri] Levy played a role [in the Zionist takeover of Libya euphemized as] Kadhafi's overthrow has been known since the first days of the [Zionist hostilities] in March, but the extent of his involvement was revealed this week in his new book on the war and in an interview with AFP.

He describes how ... he met [terrorist] leaders in Benghazi and, on the basis of the briefest of meetings, decided to introduce them to Sarkozy.

With his trademark hand-made white shirts open to the chest, constant media appearances and celebrity lifestyle, Levy -- or "BHL" as he is known in Paris -- is [justifiably, but not often enough] mocked as a showman rather than a serious thinker [which he clearly is not].

He [claimed] that in March he had little idea who the men behind the rebel National Transitional Council were, having only talked briefly with its [known terrorist] leader [with Zionist intelligence agency ties] Mustafa Abdel Jalil, but he nevertheless decided France must support them [because they said they would support Counterfeit Israel].

"I don't really know who Abdel Jalil is, but I know what a massacre is. I have seen many in by life," [claimed] Levy, a [pseudo-]intellectual activist [instigator of Zionist massacres] ...

On March 5, Levy met leaders of the fledgling NTC in the hours after they formed the body to unite revolutionary forces against [Libya] ...

"My plan is to bring a delegation from the council that was just formed to Paris ... Would you agree to meet, personally, with this delegation?" he asked Sarkozy. "Of course," the president replied, according to Levy's book.

Five days later Levy brought a delegation to the Elysee. To general astonishment, France immediately recognised the rebel regime [suggesting that they already had the word on these spooks].

French and British diplomats worked swiftly to secure a UN resolution authorising force to [steal Libya's resources and kill Libyan civilians while claiming to] protect Libyan civilians. On March 19 [Purim, on the rabbinic calendar, the same day of the rabbinic year that the 2003 assault on Iraq was launched] a salvo of US cruise missiles marked the start of a [Zionist] bombing campaign.

But Levy's role was not over. He made more trips to Libya, visiting rebels in the Djebel Nafusa highlands and the besieged port of Misrata, and arranging more high-wire [gunboat] diplomacy.

He introduced CNT military leader Abdel Fatah Younes to Sarkozy in midnight talks in Paris on April 13. France sent military trainers and large quantities of weapons to the front, turning the course of the [attempted takeover].

[Levy's] role was shifting. He had become a player in the [hostilities], helping the rebels draft public statements and attending talks between Younes and Sarkozy in which strategy and weapons drops were discussed in detail ...
Full uncorrected puff piece

And I'm sure the wannabe Levite clown appreciates your endorsement!

Don't get me wrong, I concede that the counterfeit Levite knows how to speak and write in French--the better to dragoon French blood and treasure into Zionist wars and score those French 'shiksas.'

This does not make him French, intellectual or a philosopher.

We have a lot of those kinds here in the states. They're not Americans or intellectuals. They're every bit as outrageous, they just know that the David Hasselhoff act wouldn't meld well with U.S. politics.

I concede, they do know how to fool some of us some of the time. Wearing the right costume and speaking the right dialect is a big part of the deception.

Even Hasselhoff excuses himself from politics:

But the fake Levite, he can have it all: lover, poet, philosopher, power-politician, Temple priest, international man of mystery ... His Rebbe and his Bubbie and his friends in the press told him so! There's nothing he can't fake his way through with all that chutzpah, and cash.

And now they are targeting Syrian Christians and Black Libyans. See:

Piddling is correct...and the 'Judaics' are winning at every front.
Your silly idolatrous 'theology' is part of the dust heap of history that fewer and fewer people are taking seriously.

When the graft runs out, so will your "winning." That's a poor measure of success as I see it.

Also, the accusation of "idolatry" carries little weight coming from a person who worships himself.

Your piddling intellect is a reflection of your depraved surroundings and easily identifiable under any given pseudonym. God have mercy on you.

God does have mercy on me.That's why I was blessed to be born in Israel and participating in its extraordinary rebirth, while watching the diminution of the most ridiculous 'religion' in the world. And I don't mean Islam though it is quite ridiculous.

See, this is the kind of dialogue that the rabbis and bishops should be having because it illustrates the ridiculousness of the idea that Christianity and the Bible have something to do with Judaism.

The birth of counterfeit Israel and all of the intrigue, deception, corruption, graft, infiltration, murder, welfare, and every kind of vice on a cosmic scale that has been required to prop up the unnatural and unsustainable entity you call home is not a sign of mercy or blessing from the God of the Bible.

This is the work of the god of the Talmud and Kabbalah--self-worshipers like Bernard Henri Levy and yourself. If you believed in the all-powerful, transcendent God of the Bible, you'd have no concern for what followers of 'that man' who is already "in the dustbin of history" says or their "piddling blogs." But for five years you check in regularly to see what they have to say about your delusional little nation that you call "Israel."

Your insecurity is patent. As much as you make yourselves to be gods you know you didn't create the heavens and the earth and your attempts to better the One who did have always been humiliating failures.

My poor, deluded friend, this tower of Babel your fellows are building is going to fall hard. Come out of it while you can.

A hilarious video of BHL being ejected several times from the 'Victory' podium in Tripoli can be seen here:

The best bit is when he returns wearing dark glasses but still gets ejected.


And here on Al Jazeera you can see an English language interview where he uses the term blow jobs.
http://youtu.be/NGCLPLIlKno

You misunderstand my motives and interests and project alot of psychobabble without knowing anything real about me.
As a child of Holocaust survivors, I've always been interested in the phenomena and reality of anti-Semitism and the church's role in it.
Your rants and selections give me a fascinating view of the current face of the insane hatred that Christianity has been promulgating since its beginnings.

If you were to reread the books of the Prophets and their extensive prophecies about the return of Zion to Jerusalem and Israel, and if you
were to spend some time here seeing what's really going on, and capable of being objective for a moment-you may understand why I say that the prophecies of the return and rise of Israel are coming true before our eyes. Though it takes open eyes to see it. And yours are very cloudy with loathsome toxicity.
(couldn't help the run on sentences)

Boy! What big shoes they wear!

truth seeker, Are your brothers' going to have to lead the Nations into a massive war against many defenseless Nations before God rejoices over you more than he rejoiced over your fathers?