From Failed Messiah we have a translation of a text of the Skver [also spelled "Skvere"] Hasidic sect. Rabbi Mayer Schiller (who for decades has ingratiated himself with traditional Catholics and was even invited to speak at the SSPX seminary in Ridgefield Connecticut on numerous occasions) is a member and spokesperson for the Skver Hasidic sect. We have been warning against his cajolery for years to no notable effect. Mayer Schiller is featured in a Fatima video, "Heaven's Key to Peace" alongside traditional Catholicism's most respected pundits. Below are the master race teachings of hatred imparted to the youth of Rabbi Mayer Schiller's Skver Hasidic sect.

A recently published book written by a Skvere hasidic rabbi and endorsed by the Skvere Rebbe himself tells Skvere hasidim and other Jews to hate all gentiles. Gentiles are wholly evil, the book says. They spiritually pollute the world, and even looking at their faces is harmful.

The book is called Yalkut Shaiylos u'Teshuvos. As the title indicates, it is a collection of questions and answers on halakhic topics. The questions were asked by young Skvere yeshiva students in New Square, New York. The answers are rabbinic.

The section translated below is titled, "Goyyim" and it explains the Skvere hasidic view of non-Jews, citing among other sources, the Skvere Rebbe himself.

The anti-gentile hatred is based on rabbinic sources. Those sources are heavily influenced by kabbalah and by hasidic thought.

A similar attitude toward non-Jews can be found in the Tanya, the so-called bible of Chabad hasidic thought written by the first rebbe of Chabad, Schneur Zalman of Liadi, and reprinted thousands of times by Chabad worldwide.

The translation was made by the noted filmmaker Menachem Daum, who sent it to me along with the scans of the book posted below and requested that I post it.

Question:  Is it appropriate to not love, or to hate, a gentile?

Answer:  A Jew is intrinsically good.  A Jew is a part of God above.  Even if at times he strays it is not because he has become evil.  It is only that there is evil within him that he has to cleanse.

However, to separate with a million degrees of separation, a gentile is an impure thing.  The entire essence of the gentile is evil and impure.  Even if he occasionally does good deeds he does not thereby become good.  As the Holy Light of Life {i.e., the author of the book Ohr HaHayyim] says regarding gentiles, even such a one who is very careful in his actions does not obtain any degree of holiness thereby.

As is also well known, even educated gentiles who guarded themselves because of their clear understanding of what is right, nonetheless failed when they were tested, because a gentile has no power for goodness within him.

He says that to be protected from this there is only one solution; to completely despise the thoughts of gentiles and to realize that all their thoughts are only evil. (Hate doesn’t mean wanting to do something to a gentile, but it means not being able to tolerate him, not being able to stand him, because of his great impurity, especially when one realizes how harmful this {impurity} is {to Jews and to the world}.) Understandably, loving a gentile is the exact opposite of this.

The Holy Light of Life {i.e., the author of the book Ohr HaHayyim} says that for a person to be totally protected from evil he must hate the thing that has caused him to sin. This is why God commanded to uproot the trees of Midian. Since the Midianites caused the Jews to sin with the Peor idol, so therefore Jews must hate everything connected to Midian. Consequently, gentiles, whose thoughts bring upon us ordeals, may be hated.

So also the Holy Light of Life {i.e., the author of the book Ohr HaHayyim} writes, in the portion of Vayigash {in his book entitled Oh HaHayyim}, that the nature of the righteous ones is to hate gentiles.

Speaking of gentiles it is worth mentioning two points. First, with respect to conversing with a gentile: a gentile is impure, as we have mentioned, and he defiles one who speaks to him and this brings evil upon a person. (Except when one is forced to do so because then, as is explained by the Enlightener of the Eyes {i.e., the author of the book Me’or Eynayim}, we thereby extract the little bit of good which has fallen into the gentile, since everything in the world is a mixture of evil and good.)

Especially if one converses with friendship, because the texts tell us that when two people speak with affection then a portion of each one’s soul becomes connected to the other and no one wants to become connected to a gentile, God forbid.  (Understandably, when one must converse one must do so like a human being.  However, in his heart one should not love him.  And it is worth knowing that “it is a well-known law that Esau [the gentile] hates Jacob [the Jew].” The gentile hates you.  It is only because of his ulterior motives that he is talking in a friendly manner, because it is in his best interests to do so at this moment, because of his job or for tens of others reasons. Even the righteous gentiles among the nations are often so because they hate inhumanity and murder but not because they love Jews.)

The second point is; one is not to concentrate on the face of a gentile. As the Willows of the Valley {the author of the book Arvei Nahal} writes on the Talmudic passage, “it is forbidden to look upon the face of an evildoer”, because the other side [the devil] {the sitra achra} cloaks himself in the guise of an evildoer and it is a danger to look at him. This passage refers to a Jew who has, God forbid, become an evildoer. Certainly, beyond any doubt, a gentile whose whole nature is essentially evil, looking at his appearance is defiling.

Our Honorable Holy Teacher, Our Master, Our Guide, Our Rebbe [of Skver], may he live a long and good life, repeated in the name of the Maharal that gentiles are referred to as “wicked waters” while Jews are akin to fire. Naturally, when fire and water mix the water extinguishes the fire. However, when there is an iron barrier between them, for example, water in a pot, then on the contrary, the fire cooks and evaporates the water.  Similarly, if one has connections to a gentile the gentile can, God forbid, extinguish the fire in the soul. However, if one is separated in all matters then the Jewish soul will triumph. 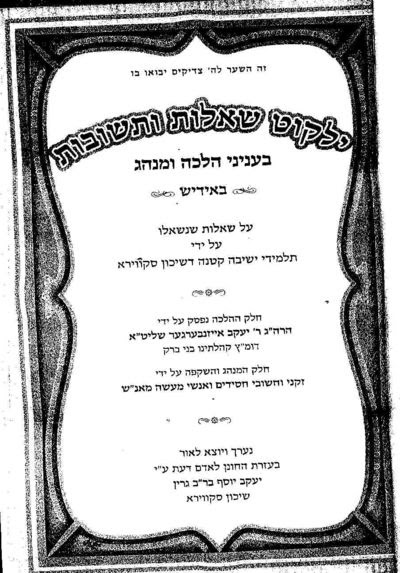 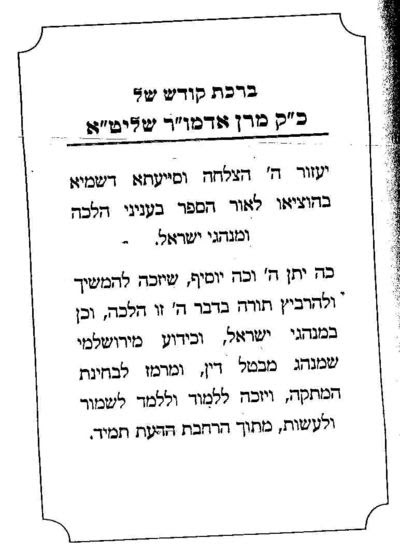 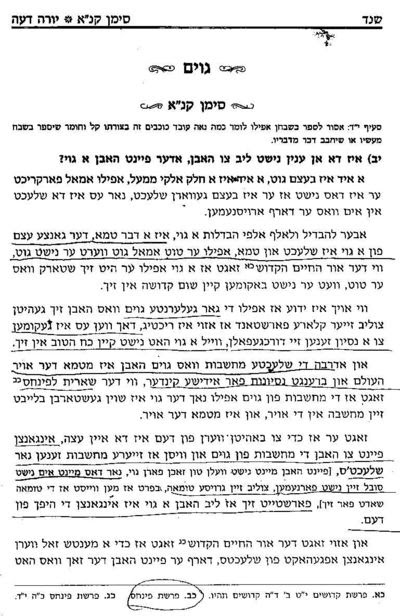 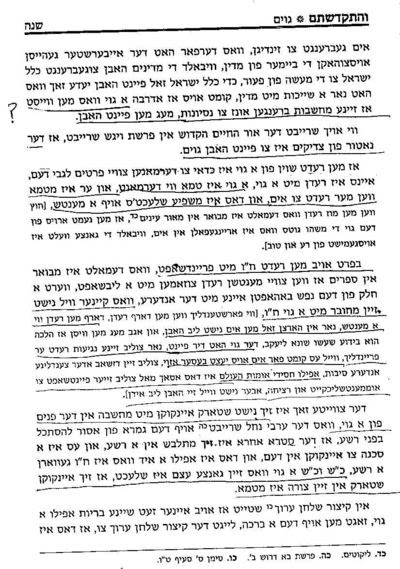 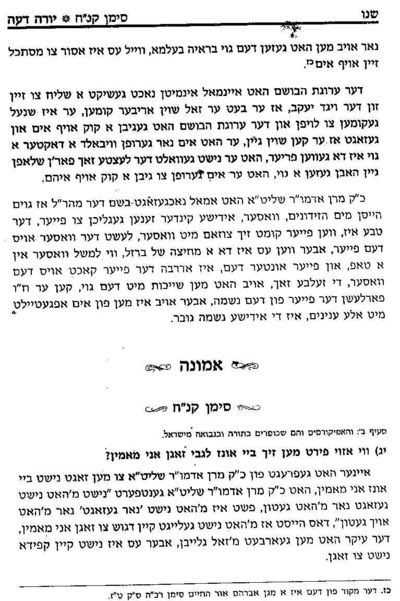 Hasidim: [Burn Victim] Deserved What He Got
Posted by Maurice Pinay at 7:36 PM 5 comments:

"... even though the Shoah ["The Holocaust"] belongs uniquely to the Jewish people, to remember it is the duty of all humanity." 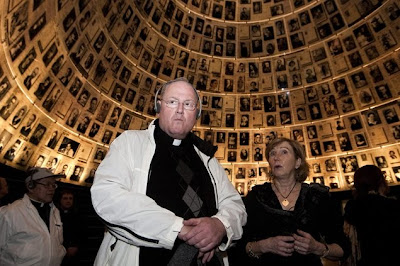 New York Archbishop Timothy Dolan put on the 'Holocaust' headphones at his [requisite to advancement] pilgrimage to counterfeit Israel's Yad Vashem 'Holocaust' 'museum' on January 30, 2011. He left his raucous guffaws, inane jokes and cheese hat at St. Patrick's Cathedral. At Yad Vashem's 'Hall of Names' we witness a display of seriousness and devotion from Dolan perhaps even more extreme than his irreverence and clownishness at the most sanctified Christian times and places. Dolan offers us a jarring study in contrast. This depraved example from Dolan inculcates the same depravity in his followers. 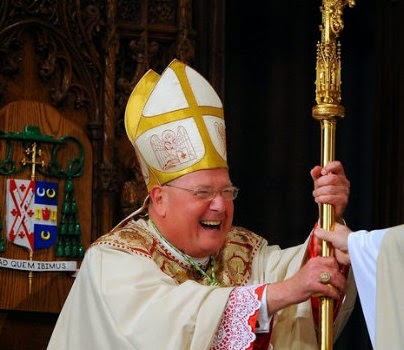 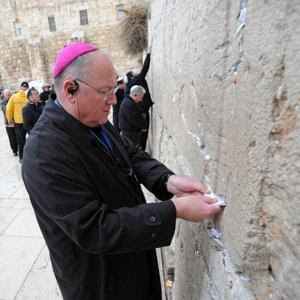 On January 30, 2011, following Hasidic tradition, an uncharacteristically pious and serious Timothy Dolan puts his “kvitel” (intentional prayer) in a crack of 'The Wailing Wall' in counterfeit Jerusalem, which in all likelihood is not part of the Temple which Jesus foretold would be destroyed to the degree that not even one stone would be left standing on another (Matthew 24;22). Dolan and similar philorabbinic 'Christians' suggest by such ruses that there is some spiritual, religious presence to a place that Jesus said is desolate (Matthew 23;38-39). 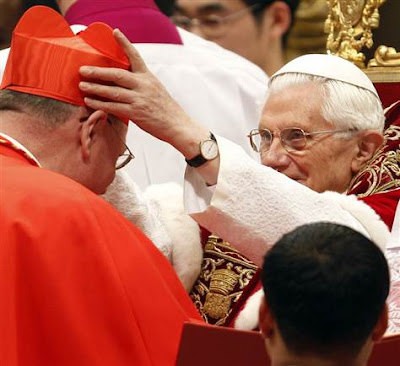 On February 18, 2012, two weeks following Archbishop Timothy Dolan's requisite public submission to Zionism and Holocaustolatry he is rewarded with a red hat. At the ceremony Dolan comments that red symbolizes unconditional love of the faith even unto shedding of blood. I have no doubt that Timothy Dolan would sooner shed blood for 'The Holocaust' than defend the Gospel that he and his brothers in the 'Holocaust' faith trample upon with impunity.

Pick Noahide A or Noahide B

Auschwitz "The Golgotha of the Modern World"
Posted by Maurice Pinay at 2:34 PM 2 comments:

Holocaustolators are the most credulous of all true believers.

A rabbi who proclaimed himself the “Jewish Indiana Jones” admitted Thursday he was really the villain in a made-for-Hollywood swindle.

Menachem Youlus, a Baltimore bookstore owner, pleaded guilty in Manhattan Federal Court to spinning a web of lies that snared a billionaire philanthropist.

He faces up to five years in prison for creating a bogus charity built on fictional tales of rescuing Holocaust-era Torahs, selling forgeries and pocketing the dough.

“I know what I did was wrong and I deeply regret my conduct,” Youlus said in court.

His lawyer, Benjamin Brafman, said the plea deal “ends an agonizing voyage by a good man with the best of intentions who ultimately strayed into fraudulent conduct.”

Prosecutors had charged Youlus, 50, with weaving fantastical tales of international derring-do to impress donors to his charity.

He claimed to have used a metal detector to unearth a metal box with Torah scrolls on the grounds of the Auschwitz concentration camp.

He sold the supposed relic to investor David Rubenstein, who donated them to the Central Synagogue in Manhattan, and tried to soak him for a $250,000 donation, court papers say.

Youlus also convinced a buyer that he found a Torah at the Bergen-Belsen camp by telling a ridiculous account of stumbling onto a hole in the corner of the floorboards.

He used the money to pay private school tuition bills for his kids and to make personal investments.

U.S. Attorney Preet Bharara noted that Youlus had “exploited the profound emotions attached to one of the most painful chapters in world history — the Holocaust — in order to make a profit.

“Today’s guilty plea is a fitting conclusion to his story and he will now be punished for his brazen fraud.

'Holocaust' Huckster Brings His Travelin' Show to Kiev
Posted by Maurice Pinay at 8:27 AM No comments: