To aid in decoding this Synagogue and State fraud I have interspersed comments and links in the text below of the Pentagon's 'Yom HaShoah' 'Holocaust' Liturgy which Secretary of 'Defense,' Leon Panetta recited at the Pentagon for the 'Holocaust' high holy day, 'Yom HaShoah' 2012. Panetta was one of the scoundrels who foisted this psychological warfare holy day on the people of the U.S. for the purpose of covering over Allied WWII atrocities against the Christian civilians of Europe and Japan and justifying the massive expenditure in blood and treasure that propped up and continues to prop up the Judaic Imperium. Panetta can be counted upon to wage never ending 'preemptive' war to "prevent another 'Holocaust'" which is always right around every corner of the Greater Counterfeit Israel project. 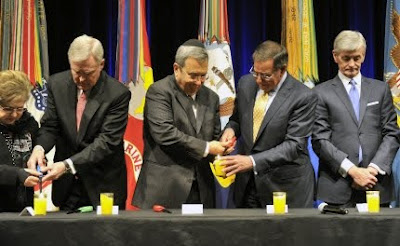 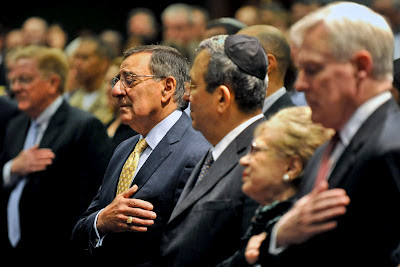 Defense Secretary Leon E. Panetta piously places his hand over his heart as he listens to the national anthem during a Holocaust Remembrance at the Pentagon, April 19, 2012. Israeli Defense Minister Ehud Barak, third from right, joined Panetta for the event.

... Today we also celebrate the enduring strength of the Jewish people, who overcame this tragedy and built a strong and vibrant Jewish state in Israel. They have flourished there, they have flourished here in America, and indeed across the world, and that too is an inspiration to all of us.

... I just had the opportunity to meet with my friend ['Defense' Minister of Counterfeit Israel] Ehud Barak, and we are deeply honored that he was able to join us here today in this observance

Today the world comes together to mark Yom Ha’Shoah – Holocaust Remembrance Day. It was my privilege to have served in the U.S. House of Representatives when we passed a law recognizing the days surrounding Yom Ha’Shoah as a national civic commemoration, a law that also established the United States Holocaust Memorial Museum. I believed it was important then when I cast that vote, and it is important today, to mark these days of remembrance, because through commemorations like this, large and small, within families at home, we send a strong message that we will never forget, and that we will never allow this to happen again. That solemn responsibility is shared by us as human beings, by us as Americans, and by us as men and women of the Department of Defense, who could be asked, when the time comes, to act, to make sure that it never happens again.

For the United States Armed Services, these events are not a distant memory. Our modern military was forged in the crucible of World War II. It was forged in the fight against Nazi tyranny. To defeat Hitler we mobilized all of the strength that we could muster, and in that effort we witnessed many of our finest hours as a military and indeed, as a country.

Today we carry forward the proud legacy of men and women of the United States Army who played a vital role in liberating the camps at Buchenwald, Dora-Mittelbau, Flossenbürg, Dachau, and Mauthausen. American forces not only brought freedom to the survivors of Nazi horrors, they also made sure that in its aftermath the world would know what [is alleged to have] happened.

In the days after Allied forces captured the first concentration camps, General Eisenhower, General Patton and General Bradley themselves inspected a camp [that had previously been prepared by the U.S. OSS (the predecessor to the CIA) as a psychological warfare operation], and learned and saw [staged 'evidence' of] atrocities that had [been intended to appear as though they had] occurred. They were, in Eisenhower’s words, atrocities “beyond the American mind to comprehend” [but not beyond the the OSS's imagination to dream up]. Eisenhower ordered every American soldier in the area who was not on the front lines to take the time to tour these [psychological warfare operations the OSS had set up in the] camps, so that they could themselves see what they were [alleged to have been] fighting against, and why they were [alleged to be] fighting. These soldiers became not only liberators, but witnesses to [what is alleged to be] one of the greatest atrocities in history [the purpose of the psychological warfare operation. German civilians were also forced to 'witness' the displays of 'atrocities' staged by the OSS].

The commitment of our forces to the survivors of Nazi atrocities did not end with liberation.  In the aftermath of war, we cared for survivors and we helped reunite families.  We provided physical nourishment, and we provided spiritual nourishment as well.

For example, upon [hearing the Yiddish tall tale that] there was not a single complete edition of the Talmud in Germany General Joseph McNarney, commander of the American zone of Occupied Germany, undertook an effort to print a Talmud for survivors [Hitler was more hostile to the Bible than the Talmud. He did in fact allow printing of the Talmud. Moreover, he did not print Johannes Eisenmenger's devastating, unsurpassed critique of Judaism].

And when American forces discovered enormous caches of looted cultural materials, they set about ensuring that these objects were treated with the greatest respect.

Ultimately, thanks to these efforts, millions of objects and sacred texts were returned to their rightful heirs or held in trust by Jewish successor organizations.

The leader of that effort, a U.S. Army Captain named Seymour Pomrenze, was a hero whose actions embodied the professionalism and dedication of the uniform he wore.

The contributions of American service members like Captain Pomrenze make all of us proud, and we remember them as we come together as a community today to mark Holocaust Remembrance Day.

Though we will always know what good was done and that lives were saved, we must always remember that we were unable to save the six million Jews who perished under Hitler’s cruel reign.

Today we renew that commitment.  That is what this day is truly all about.  We do so by coming together to bear witness, just as our service members did more than sixty-five years ago.  In a moment, we will be privileged to hear from Charlene Schiff, who has dedicated her life to making sure that the lives of those who perished in the Holocaust are never forgotten.

Out of the darkness that was the Holocaust comes the eternal hope that never again, never again, will we allow that to happen.  I would now like to invite Minister Barak and the Service Secretaries to join me and Charlene in lighting memorial candles.

These candles symbolize unity and hope, and our shared commitment to honor the memory of all those who perished in the Holocaust.

At Auschwitz, Future U.S. Military Leaders Learn to Hate
Posted by Maurice Pinay at 12:23 AM

Us Conference of Catholic Bishops in the past chose him to be on one of its review boards. Panneta calls himself a catholic and yet is pro choice and also promotes other anti-Catholic agenda.

Maybe we will be seeing SSPX Bishop Fellay these liturgies in the future. It seems that many so called do more to promote and support other religions then their own faith.

It funy how a national Jewish holiday is implemented while Christian based national holidays are slowly being removed.

How can the USA have such a holiday and not have a holiday remembering anti-Catholicism and even the holocaust of native americans who were given blankets of small pox?

While they were celebrating the Holocaust, many of us were in Philadelphia, pa to listen to Ron Paul, presidential candidate.

It was refreshing to listen to one of the speakers who was once higher up. I believe he was former secret service. The speaker said that USA shouldn't be fighting Israels war. I later learned that Ron Paul feels the same way... Finally, people who have the courage to speak the truth.

I have always felt the same way. Who said that the USA should police the world when it can't even manage itself.

The Catholic Church should be against war, abortion, contraception.

We have too many lukewarm two faced catholics like Panneta, Pelosi, Biden, and several supreme court justices.

Now these liberals want to change the american constitution.

And did you notice how Panneta worships with people who don't even believe in Jesus Christ our Savior...I bet Panneta is a Mason too. So many new order vatican II pro choice catholics are masons.

Real Americans SING THE NATIONAL ANTHEM not listen.. maybe they don't know the words. We all know that they aren't teaching our children in the schools.

They don't pledge allegiance to the flag or Pray to God. They are not taught about patriotism and our american history. Instead, they are taught about sex, drugs and of course the holocaust is mandatory teaching..and now schools have gay and lesbian clubs.

You know what is really sad, Mr. Pinay? Is that big brother is probably watching all of us who speak the Truth.

"For example, upon hearing that there was not a single complete edition of the Talmud in Germany, General Joseph McNarney, commander of the American zone of Occupied Germany, undertook an effort to print a Talmud for survivors.”

Hitler allowed the printing of a deluxe edition of the Talmud in Germany in the 1930s. Many thousands were published. I own one volume from the multi-volume set. Panetta is either prevaricating or has accepted some Zionist or Allied malarkey as fact, without checking.

Holocaustianity is the de facto state religion of America and the West; the last truly believed religion in the otherwise agnostic West.