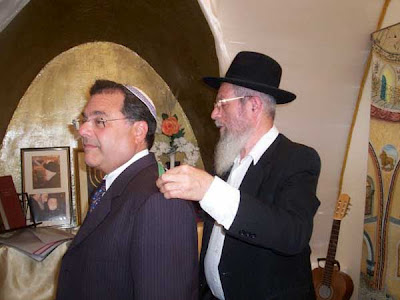 Pope Benedict XVI has said, "Christians can learn a great deal from a Jewish exegesis practised for more than 2000 years ... for the interior formation of Christian consciousness," a notion which I reject entirely as a very bad deal. Nevertheless, we occasionally briefly entertain this reasoning as it behooves those paddling on the Pope's "little wave of tradition" to consider the trajectory of the great tsunami of Judeophilia he rides upon.

Rabbi Riskin has offered his exegesis of Numbers 19:9 which was published in The Jewish Week, June 26, 2012  of which I offer a highlight:


Without the moral teachings of Israel, without the seven Noahide Laws and the Ten Commandments, the free world would cease to exist, and humanity would dissolve in a blast of nuclear explosions.


Aside from pointing out that it is master-race Talmudists such as himself that Rabbi Riskin refers to as "Israel;" that the rabbi-concocted "Noahide Laws" are of the Talmud which nullifies the Ten Commandments; that SSPX Superior Bernard Fellay's lawyer would take great offense at the observation that it is, in fact, the actualization of the talmudic 'morals' and teachings of this Counterfeit Israel which threatens an apocalypse of its own making; I believe no additional comment is necessary.

On the contrary, it could be in great trouble if Zionist Israel pushes the button. The problem for the jews, as Our Bleesed Lord clearly understood is their lack of love and compassion. They created so many laws around The Commandments that they made it impossible for sinners to find salvation. Thankfully, it is Our Lord Jesus Christ, The Messiah they reject who has overcome the world and all of its so-called power with the law of love rooted in obedience to His will. Now that is more potent than any nuclear explosion and without His love the world would have ended in utter diaster in any case. As St Pio da Pietrelcina stated, it is not without the Sun but without The Holy Mass (in Latin, the one he said all his priestly life) that the Earth would cease to exist. How can any rabbi comprehend such a profound mystery as this?

You're right. As a rabbi I have no way of comprehending such a 'profound mystery'. I can only shake my head in profound disgust for the extraordinary desecration of the Holy that Xtianity is responsible for. Fortunately it's impact has waned and is basically non existent.

Thanks for chiming in, rabbi.

Alternately, it's with profound disgust that I receive each new report of rabbis infecting infant boys with holy herpes causing them sickness, disfigurement, brain damage and even death.

Indeed, it is a 'profound mystery' that the rabbis persist in this disgusting 'suction by mouth' ritual despite it's plainly evident incompatibility with nature and the will of the Creator, not to mention the manifest ridiculousness of holy rabbinic rationalization that putting a human mouth on an open wound is a safety measure.

I can only thank God that non-Judaic populations and especially the medical profession have been spared this profoundly holy rabbinic wisdom and practice.

God willing, the prisoners of the rabbinic ghetto will be freed from the extraordinarily depraved, rabbi-contrived holy traditions of which this is but one of many examples.

'Rabbi,' to be disgusted by a man cutting the entire foreskin from an infant's penis and then sucking blood from the wound is not hateful. On the contrary, it's the minimum threshold of sanity and civilization to be repulsed by such barbarity.

This disgusting 'suction by mouth' tradition is not 'outdated' as you claim. There never was an appropriate time for it. It's an entirely unbiblical rabbinic contrivance which never had any substantive purpose other than fulfilling the penis-centricity, blood fascination and obsessive tribalism of the rabbis.

Moreover. there are very few advocating for abolishment of 'suction by mouth' and some who do are attacked by the ostensibly educated and enlightened "Anti-Defamation League" of B'nai Brith which name in itself ("Sons of the Covenant [of Circumcision]") hearkens to that same disgusting talmudic tradition. The "Agudath Israel" and all other Hasidic sects use their considerable means of political power to assure the barbaric ritual continues and that those who oppose it are attacked and ostracized from the community.

There's a lot of work to be done before such P.R. statements as yours can have some substance behind them.

'Rabbi,' your little immaterial objection only gives the opportunity to further document the substance of my point:

While the name [B'nai B'rith] was selected as a replacement for the title 'Bundes Bruder' a German-Jewish lodge founded in New York in 1843 the name evokes, for fin de siècle Viennese Jews, a direct association with the image of circumcision.(Sander Gilman, Jewish Explorations of Sexuality, edited by Jonathan Magonet, p.138)

If you look up the book quoted here you will see that Mr. Gilman bolsters his point by citing Theodor Reik who, like his master Sigmund Freud, was a member of B'nai B'rith.

I assure you:Tax collectors and prostitues are entering the kingdom of GOD before you!For John came to you in the way of righteouness,and you didnt believe him.Tax collectores and prostitues did believe him,but you,when you saw it,didnt even change youre minds then and believe him.THE STONE THAT THE BUILDERS REJECTED HAS BECOME THE CORNERSTONE.THIS CAME FROM THE LORD AND IS WONDERFUL IN OUR EYES.