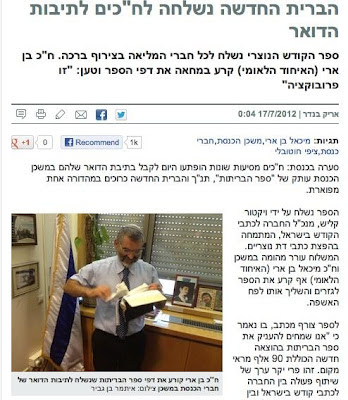 "Elder Brothers in the Faith" Hate the Central Symbol of our Faith
Posted by Maurice Pinay at 4:53 PM

Matthew 7:6 "..neither cast ye your pearls before swine, lest they trample them under their feet, and turn again and rend you."

A depiction of hands rending the New Testament should displace the Star of David as the symbol of Judaism; it incomparably emblematizes the Jew as implacable foe of Christ and the one true Faith.

I'm in complete agreement with you, Mr. Pinay. Judging by blood is an abomination. A Jew who gains entry into the Church through Baptism is no longer a Jew (except in the most incidental sense), but a Catholic, with all the rights and obligations that pertain thereto. The "Jew as implacable foe of Christ and the one true Faith" is the perfidious Jew, he who willfully refuses to accept that Christ is the Son of God.

Malleus Haereticorum, "the Jew" is useless terminology which casts this forum as a place of early 20th century eugenics which it definitely is not.

Christ distinguished between common Jews (from among whom his Apostles were mercifully chosen) and the moneylenders and corrupt religious leaders who received his unreserved harshness.

These people you reference are not biblical Jews in any sense, nevertheless we should imitate Christ's proportion and distinction with them as we would any group.

This bastard has secured for himself a seat next to Lucifer in Hell.

What does the SSPX think of this?