Followers of the Kosher-Catholic containment operation "Rorate-Caeli" may recall "New Catholic" (scroll down to the comments) turning his audience over to a guest contributor by the name "Bonetus" with the endorsement, "We are pleased to introduce our new contributor, Bonetus, a very wise and pious man."

And with this prodding of the traditional goyim to learn at the feet of the "very wise man," "Bonetus" proceeded with a transparent, condescending agenda of defining the boundaries for acceptable speech on the topic of 'The Jews' beginning by dredging up a ridiculous paen to the alleged racial prestige of today's Khazar 'Jews' of whom it is alleged "Christ was born according to the flesh" and "the Immaculate Virgin Mary [is] already their sister according to the flesh" in blatant mockery of St. John the Baptist, St. Paul, and Jesus Christ who had no tolerance for such racial boasting, even from true genetic Israelites of His time.

I mention "New Catholic's"  heralding of the "very wise [Judaizing] man" "Bonetus" as an introduction to documentation on the early 16th century figure, "Bonetus," the rabbi/physician/'prophet'/astrologer to who is commonly regarded as the most corrupt pope in the history of the Church, the Borgia pope, Alexander VI.

Contemporaries of Erasmus: a biographical register of the Renaissance and Reformation, Volumes 1-3, Page 196

From the Jewish Encyclopedia:

Physician and astrologer; known chiefly as the inventor of an astronomical ring-dial by means of which solar and stellar altitudes can be measured and the time determined with great precision by night as well as by day; lived in the latter part of the fifteenth century and the beginning of the sixteenth. Originally from Provence, and belonging to a family that had its origin in Lattes near Montpellier, he was forced to leave Provence with the rest of his brethren and settled in Carpentras. Thence he went to Rome, where he became physician to Pope Alexander VI. (1430-1503), and later to Pope Leo X. (1503-13). At this time he became rabbi of the Jewish community, to which he was able to render much assistance. He married the daughter of the physician Comprat Mossé of Aix. Bonet described the use of his instrument in a treatise written in Carpentras, the full title of which is: "Boneti de Latis, Medici Provenzalis, Annuli per eum Composti Super Astrologiæ Utilitate." It appeared as a supplement to the "Calculatio Composta in Rima de Juliano de Dati," Rome, 1493, and was dedicated to Pope Alexander VI. At the end Bonet craves pardon for his bad Latin, on the score of being a Hebrew. The treatise was republished by Jacob Faber of Etaples, together with his own commentary on John Sacrobosco's "De Sphæra Mundi" and Euclid's "Geometry," Paris, 1500. Editions were also published in 1507, 1521, and 1534. Two editions appeared later at Marburg, in 1537 and 1557. In bad Latin, Bonet wrote a treatise entitled "Prognosticum," published at Rome in 1498, and dedicated to cardinals Valentiniani and De Borgia, in which he predicted the coming of the Messiah in the year 1505 [!]. A full account of the book is to be found in Abraham Farrisol's manuscript, "Magen Abraham," or "Wikuaḥ ha-Dat."

A pupil of the above-mentioned Jacob Faber, Charles Bovillus, 1470-1553, relates in the preface to his "Dialogi de Trinitate" that he met Bonet de Lates in the Roman ghetto in 1507, and went to his house in order to see the ring that he had invented ...

It is evidence of the position held by Bonet at the papal court that on Oct. 13, 1513, ['Christian Kabbalist' Johannes] Reuchlin begged him to use his influence in order that the examination of the "Augenspiegel" [his defense against the heresy proceedings against him] should not be given into the hands of a commission made up of strangers [that is, believing Catholics], at all events not of Dominicans. Further, Bonet's intercession seems to have been successful.

Bonet is known to have had two sons. One, Joseph, continued to remain in the papal favor; the other, Immanuel, was also in the service of the pope, from whom he received a regular salary. 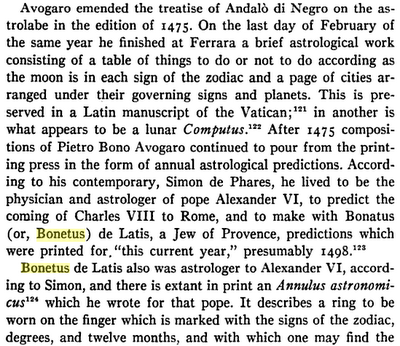 A History of Magic and Experimental Science: Fourteenth and Fifteenth Centuries, Lynn Thorndyke

"Sistine Secrets"
Posted by Maurice Pinay at 1:29 AM


But I found it on the following page:

Below is an objection and my response copied from a traditionalist forum:

MauricePinay does some good work but this connection appears inconclusive. The alias "Bonetus" could be a reference to the Franciscan missionary to Asia Nicholas Bonetus.

I have no way of knowing what "New Catholic's" "wise man" had in mind by choosing the name, "Bonetus" and have not implied otherwise.

Rorate Caeli's Bonetus' race exaltation self-associates with Alexander VI's Bonetus and every other pharisaic venerator of Judaic race. I have no compunction against recognizing that fact nor should anyone else.

If the Judaizing Bonetus of the Renaissance nostalgia-conjuring Rorate Caeli did have in mind to create an association with a medieval Franciscan Scotist or any given orthodox Catholic figure, then I'm glad to frustrate that effort.

Nevertheless, I've not seen Alexander VI's court 'Jew' Bonetus mentioned in any traditionalist writing so I hope the information I've raised is of some good use.

That's correct. If you scroll down to the comments in the first link you may find them relevant.

Yes, he quotes it approvingly as an example for traditionalist readers on how how they should perceive and speak of modern 'Jews.'

“... a certain contingent of traditional Catholics is attempting to resurrect the most depraved aspects of corrupt Renaissance era, Judaizing, superstitious, usurious ‘Catholicism.”

They occasionally publish interesting news and information but it’s often framed within a milieu of prissy objections to any kind of truly radical witness to Vatican and papal corruption.

They have that kind of effeminate fascination with elaborate pomp; if there’s a cardinal parading around like Herod the Great in a 30-yard cappa magna they gush like school girls at a Beatles concert.

Yet, if Maurice Pinay publishes hard-hitting documentation on the Judaizing and subversion of the Faith, they won’t touch it with the proverbial ten-foot pole.

When the Vatican gives permission for the Talmud, Zionism and usury to be exposed and excoriated then Rorate Caeli might do so. Until then, it’s all, “Yes, your Excellency” and “Aye, aye, Your Lordship.”

If you’re a Catholic billionaire with a private chapel, this this level of aristocratic complacency might be okay. If, however, you’re one of us, wanting to set the world afire for Christ by cleaning out the nest of pederasts and den of thieves in the Roman curia, then the Maurice Pinay blog is your last resort.

Maurice deserves at least a $1000 a month in donations so he could post more often and in greater depth. If there was any kind of authentic Catholic movement out there, he'd have it.

P.S. Here is the link to the video of Most Rev. Slattery parading in his cappa magna, courtesy of Rorate Caeli.