The Rothschild-Gutmann Money Behind the SSPX Kosher Imperative

(All images below may be enlarged by clicking on them)

'The Remnant' has published an 'interview' with SSPX lawyer and asset manager Maximillian Krah in which he makes a statement regarding his involvement with a Jaidhofer Foundation:

Siscoe:  Another company name that is mentioned is Jaidhofer Foundation. Can you discuss this company?
Krah:  Yes, this is linked with the SSPX ... There is a family in Austria which wanted to donate to the SSPX, but did not want to donate directly. They wanted to establish a foundation that would support the SSPX.  And in every foundation you need some trustees.  It’s a kind of trust, and I am one of the trustees.  I was chosen by the family who established the foundation ...  This foundation is supporting the SSPX and using the money which was donated by this family. As an example, it is supporting the new Seminary project in Virginia ...

Below is a picture of Maximillian Krah at Jaidhof with members of the Austrian Gutmann family he describes above as benefactors of the SSPX: 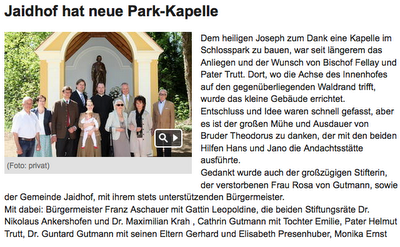 http://www.meinbezirk.at/krems-an-der-donau/chronik/jaidhof-hat-neue-park-kapelle-d182795.html
From the Rothschild family archive we find some background on the Gutmann family and how its wealth was amassed:

The steel heart of Czechoslovakia, as Frankova names it, was once owned by the Austrian Rothschilds, in partnership with the Gutmann brothers [Wilhelm and David] ... It is Salomon von Rothschild who, in 1844, bought the iron works, and founded the United Coal Mines of Vítkovice and Austro-Hungarian Blast Furnace Company ... Salomon’s English cousins helped fund the creation of De Beers in 1887.

The Jewish Encyclopedia gives us the proper name of the Gutmanns who partnered with Salomon Rothschild:

GUTMANN, WILHELM, RITTER VON: ...In 1853 he and his brother David established the firm which, during the war of 1859-60, despite the difficulties then surrounding business ventures, supplied coal for all the railroads, for all the great factories throughout the empire, and for the cities of Vienna, Budapest, and Brünn. Gutmann Bros. leased some coal-mines from the Rothschilds in 1865, and purchased outright other valuable carboniferous properties in Silesia, Galicia, and Hungary. The close connection between coal and the production of iron easily led the Gutmanns to combine their interests with the Witkowitz iron-works, which they afterward owned conjointly with the Rothschilds and the counts Larisch and Andrassy. With Kuffner they built (1871) the first sugar-factory in Austria ...

From the Jewish Encyclopedia we find that Wilhelm von Gutmann partnered with the Rothschilds in financing a rabbinical seminary in Vienna:

ISRAELITISCH-THEOLOGISCHE LEHRANSTALT: Rabbinical and teachers' seminary in Vienna, founded 1893 at the suggestion of Wilhelm and David von Guttmann and with the assistance of Albert von Rothschild and Freiherr von Königswarter, and opened Oct. 15 of that year. It is subventioned by the Austrian government, by the "Cultusgemeinden" of Vienna, Prague, and Lemberg, and by the "Landesjudenschaft" of Bohemia, and is governed by fifteen curators. The first president was Baron von Königswarter, who, at his death, was succeeded by Moritz Karpeles; the latter was followed by Moritz Edler von Kuffner.

From an obituary for one of Wilhelm von Gutmann's sons, Moritz, we find that he was a relative of the Rothschilds of Vienna: 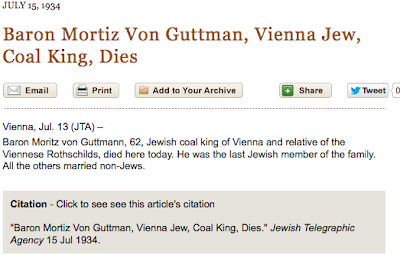 http://archive.jta.org/article/1934/07/15/2816446/baron-mortiz-von-guttman-vienna-jew-coal-king-dies
Below is a historical overview of the Gutmann family and its ownership of the Jaidhof property, which the Austrian branch of the SSPX is based from, beginning with the Rothschild partner Wilhelm Ritter von Gutmann bringing us to the present heir Guntard Gutmann who is pictured above with Maximillian Krah at an SSPX chapel on the Jaidhof grounds: 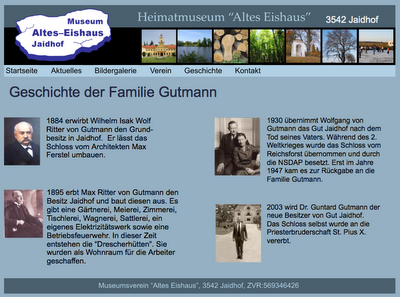 http://www.altes-eishaus.at/familie%20gutmann.htm
Below is a brief history of the Jaidhof property and its ownership including how the Jaidhof castle was given to the SSPX by the Gutmann family: 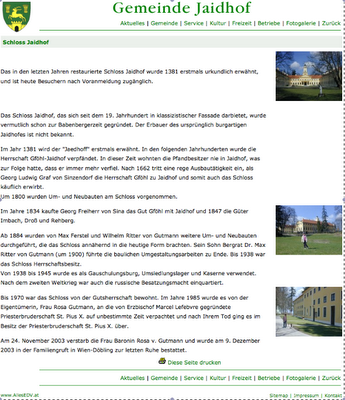 http://www.jaidhof.at/index.php?channel=113&content=1513
Below is a webpage from a "Europa Institute" which Guntard Gutmann seems to serve as an advisor on matters including think tanks and economics. He's credited as working for many years as an international banker. This Europa Institute seems to be associated with the Acton Institute which serves to acclimate Catholics to predatory economics and 'neo-con' politics. It's figurehead, Fr. Sirico officiated at the first homosexual 'marriage' in the U.S: 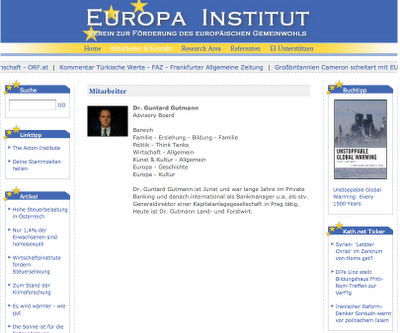 "Loyola Marymount University, a Jesuit institution at the forefront of 'Holocaust' studies and commemorations"

...On Nov. 8, Loyola Marymount University (LMU), founded by Jesuits, will host its annual citywide commemoration of [Kristallnacht], which many historians mark as the beginning of the Holocaust. At LMU’s Westchester campus, Rabbi Joseph Telushkin will give an address titled “Why the Jews? Ethical, Spiritual and Historical Lessons.”

This is the sixth year that LMU has sponsored a Kristallnacht commemoration, part of the Catholic university’s long-standing ties with the Jewish community and its scholarly interest in Jewish studies.

Among the initiators of the commemoration was William Elperin, president of The “1939” Club, an organization of Holocaust survivors and their descendants that is underwriting the event.

“It seemed to me then, and even more now, that it is really important to teach the Holocaust to non-Jewish students at a non-Jewish university,” Elperin said. “It is really not productive to preach only to the choir.”

Indicative of the LMU leadership’s philo-Judaic outlook is its support of a full-scale Jewish studies program, under the direction of professor Holli Levitsky, and the recent appointment of the first full-time rabbi, Ilana Schachter, as campus coordinator of Jewish Student Life and Hillel [campus wing of B'nai B'rith] rabbi.

Levitsky regularly leads her mostly non-Jewish students in her course “Holocaust in Poland” on a summer trip to key Polish cities and Auschwitz. Two student projects that grew out of this past summer’s trip, a creative dance and an original composition, will be performed at the Kristallnacht commemoration.

Following will be the talk by Telushkin, author of a dozen books on ethics, Jewish history, humor and mysteries. Cantor Sam Radwine will open the ceremony, Cantor Leopold Szneer will conclude it, and a kosher reception will follow ...

Posted by Maurice Pinay at 11:25 AM No comments: