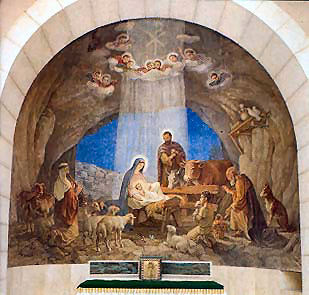 dear Maurice Pinay, A happy, joyful, grateful and hopeful Chistmas. Friend in Christ,
And to all who gather here.

God's blessings to you and your readers this Christmastide & all through 2014!

One of your most interesting articles.
Particularly from the point of view of the links to your earlier articles.
Rarely I find myself in total agreement with a Rabbi! Your link is here....
http://mauricepinay.blogspot.com/2010/11/rabbi-mayer-schiller-and-fatality-of.html
The quote from Rabbi Molnar,
"To Molnar, non-Western mass immigration was a symptom, not a cause of the West’s decline. The real problem was that the West lost its will to live. When Rabbi Schiller visited South Africa in the last months of white rule to encourage Afrikaner nationalists and demonstrate his support for them, Molnar replied: "You must encourage them to do only one thing—run away!"" You can see the on-going genocide now here....
http://christogenea.org/content/plight-whites-south-africa. Expect the same treatment when whites become a minority in their own countries. (Sweden 2024, 10 years!)
Two World Wars where we as a white Christian race got into mortal combat, destroyed a large part of our own gene pool with both sides utterly demoralised. Then you had the advent of Mass Immigration and Political Correctness which we are now witnessing.
Then Molnar says,
"But all is not lost for the West. The Rabbi said that "the doctrine of multiculturalism and political correctness is so insane and against reality that it has to be enforced by terror". Therefore, the Rabbi asserted that, even when Western societies collapse after a long period of cultural and economic decline, there will still be remnants of religious Jews and Christians, as well as social traditionalists who will preserve Western civilization and values."
To my way of thinking, that will be the future. Small White, Christian communities. The Catholic Church is toast.
Joshua Fielden

Jews and Muslims are determined to Kill Christianity. Once that's done,
the Jews are toast.

Anonymous - Nice try, but Maurice Pinay has made *repeatedly* clear that he's not hopping on the white nationalist bandwagon that Talmudic operators like the Rabbi Molnar are manipulating for their own benefit. It's clear in your case that Christianity is a mere afterthought for your Social Darwinian politics.

In that very same link he states: "Hasidim take great pride in the ability to trick and cajole "the goyim." However, I suspect that some of the names listed below are somewhat aware of this fact and go along with the charade anyway bargaining that rabbinic association might afford them cover from the "anti-semite" bludgeon. Whatever little benefit they may receive is far outweighed by the confusion and misdirection suffered by their followers and undeserved prestige accrued to Talmud, Kabbalah and Khazar "Jews" among people who should know better."

Nominal traditional Catholic "Rabbi" Molnar's making common cause with Rabbi Mayer Schiller of the Skver Hasidic sect, which teaches its children that every non-Jew is entirely evil and irredeemable in essence
HERE, is a microcosm of the cause of the West's demise.

Inviting these racial supremacist, usurer interlopers into the West as advisers and expedient means of building projects and conquests planted the seed of the West's demise centuries ago. That demise has been in progress even as the great cathedrals of Europe were being built. By usury, graft, and infiltration, gradually they gained leverage over Christendom to the degree that they dictated the wars and immigration policy, which was not "a symptom of the loss of the West's will to live" but rather a symptom of scoundrel Western leaders' squandering of the Western people's birthright for their shortsighted self-glorification to the benefit of the rabbis and bankers' long term ambitions.

I disagree with your way of thinking. Counterfeit Israel is toast. It is ritually slaughtering itself with 'holy' hubris once again. It's falling under the weight of the capstone it's presently attempting to install. Contrary to its expectations, technological advances will assure this to be its most spectacular failure yet.

I regret using that extremely broad, imprecise term 'the West' without qualification.

If saving 'the West' means preserving the relationship between corrupt 'Christian' nobility and the rabbis and bankers and their great works, I'm not interested.

To expand on Therapsid's point, in saving 'the West,' am I to stand alongside lily white George Bush and Dick Cheney against St. Augustine?

Fighting for 'whiteness' for its own sake is extremely shallow. I do believe people have a right to their ancestral lands, the right to associate with who they prefer and the right to not have immigration/emigration forced upon them, but any house built on this foundation alone is a house of cards.

Further, there is real cause to suspect Thomas Molnar's sincerity or sanity. Any peasant from early 20th century Hungary would know Hasidic Judaism is a deceptive, hostile, anti-Christ ideology which no Christian with a "will to live" could make common cause with.

There are Muslims (how many?) who are not a part of a or the Cabal to kill Christianity or Christians and their/our identity (culture). There are some who seem to be in-betweeners. They appear absolutely non-militant but a large part of their agenda is pushing "open door" immigration policies. They regularly present immigration stories (in this particular publication) of EU "situations") and though the presentations opt to "seem" straight forward accounts. They are in reality, pushing an agenda apparent by focus and repetition. It is the agenda of a "quote", "We will conquer through the power of the womb". Despite this, I resent making all the Islamic world our enemy when there could be some diplomatic cooperation and rationality for the sake of many. I resent the Jews for their lies and paranoia and promoting hatred and death at the expense of millions of Christians, Muslims and "others" for their and theirs alone perceived sake.

Anonymous January 4, Not forgotten.
They continue as we speak. Speak Up for Palestine.