http://winstonsmithministryoftruth.blogspot.com has found an old news article on a funeral for a bar of soap in Romania "with the solemnity of a regular funeral." The article doesn't specify which Romanian soap funeral it refers to (another pictured HERE).

The claim that soap was made from dead 'Jews' is one bit of WWII allied atrocity propaganda and yiddish persecution mythology which was eventually abandoned by the 'Holocaust' establishment, but not the most pious Holocaustians.

This entry highlights the Nazi soap buried at a graveyard in Sighet, Romania, near the grave of Rabbi Yekusiel Yehuda Teitelbaum, the grandfather of the Satmar Rebbe Joel Teitelbaum. Sighet is the home town of 'Shoah' huckster Elie Wiesel, 'Shoah' theologian David Weiss Halivni' and the Rebbe of the criminal Satmar mob who all attended the same heder (school where children are indoctrinated into lying, thieving, racial supremacist, anti-goyite Judaism). 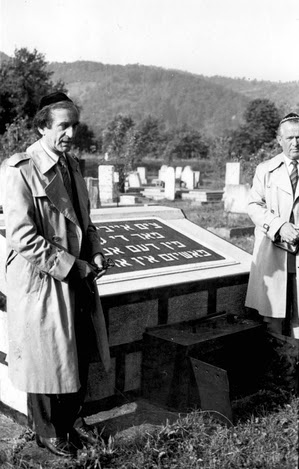 Elie Wiesel at the Sighet 'soap monument,' where Nazi soap was buried according to traditional Judaic ritual. Book your pilgrimage today

The graveyard at nearby Satu Mare, where the Satmar sect was formed, also has soap graves.

Some history on these privileged, yet hateful, superstitious 'Jews:'

The Sathmarer Jews were involved in trade and industry. In 1842 the settling of the Jews was allowed in the town of Satu Mare. The first families set in town were Grosz, Borghida, Spitz, Daniel, Steinberger, Kesztenbaum, Trebics, Farkas, Klein, Freud. In the same year it was formed the first Jewish community in town, and the first synagogue was built between 1852 and 1858 on the Decebal street. Later, the present Great Synagogue was built in its place, featuring 850 seats. The architecture copied the synagogues from Oradea and Dej.

Starting to 1867, according to the new legislature that allowed the emancipation of the Jews, they were allowed to buy and trade real estates. The way of purchasing large agricultural lands was opened. One of the biggest owners was Csengeri Mayer family from Cărăşeu. The prewar trade was flourishing being coordinated vastly by Jews through large and modern stores. The Jews contributed to the industrial development, to the economic growth of the county generally.

The Satu Mare’s industry was lead by Jews also, Freud- textile industry, Szabo and Reiter- Unio factory, brother Princz- enameled pots and machinery, Markovits- alcohol industry, and so on. In the first lines of the intelectual professions there were also Jews, most of them were doctors, lawyers, engineers.

There were 2 synagogues and 25 worship houses. In the town there were 2 Jewish communities: the Orthodox and the Status Quo Ante established in 1898. The Orthodox community had the following rabbis: Mandelbaum Benjamin 1842-1897, Grünwald Juda and Lazar 1897-1928 and Teitelbaum Joel 1934-1944. The community Status Quo Ante was lead by Csengeri Mayer Sandor as president, followed by Princz Armin, and rabbis were Jordan Sándor 1903-1935, Freidman Jozsef 1935-1944 and Klein Ernö 1946-1948.

Every community had its own cemetery. In 1905 the Zionist Organization was formed under the care of chief rabbi Dr. Jordan Sándor, being led afterwards by Borgida Jozsef and Schwartz Lajos. Later the following organizations were established: Barissia, Mirzrachi, Betar, Hassomer Haccair. The first Jewish school was opened in 1864 and so in 1936 the following schools existed: Talmud Tora on Petőfi Street, Tarbut on Cuza Vodă Street, Saare Tora on Decebal, Sefard on Martirilor Deportaţi Street. The elementary school was built on Decebal Street in 1920.

Socially, there are opened The Jewish House for Social Help, Jewish Orphanage, The Jewish Women Association. In 1927 The Jewish Hospital was established, well equipped thanks to the donations from Csengeri Mayer Sandor, Berall, Borgida, Princz and Guttmann.

Eliezer Wiesel was born in the picturesque town of Sighet, below the Carpathian mountains that were once home to the Ba’al Shem Tov, the father of Chasidism. Tantalized by Chasidic tales his grandfather told, Wiesel’s happiest childhood memories are punctuated with singing Shabbat songs, eating chocolates and studying a page of Talmud under a tree while the other youngsters played ball.

“He was a little sickly and cer­tainly what we call bookish,” recalls Professor David Weiss Halivni, who studied in cheder with Wiesel in Sighet. Halivni, now a professor of religion at Columbia University and one of Wiesel’s closest friends, says that even as a child, Wiesel was “artis­tically more sensitive” to the mys­tical teachings of their teacher.

Posted by Maurice Pinay at 3:38 PM

Great story. Here's an excerpt from Ponsonby's Falsehood in Wartime which is the WWI version of the lie:

Chapter XVII
THE CORPSE FACTORY
A series of extracts will give the record of one of the most revolting lies invented during the war, the dissemination of which throughout not only this country but the world was encouraged and connived at by both the Government and the Press. It started in 1917, and was not finally disposed of till 1925.
(Most of the quotations given are from The Times. The references in the lower strata of the Press, it will be remembered, were far more lurid.)
"One of the United States consuls, on leaving Germany in February 1917, stated in Switzerland that the Germans were distilling glycerine from the bodies of their dead". (The Times,- April 16, 1917.)
"Herr Karl Rosner, the Correspondent of the Berlin Lokalanzeiger, on the Western front . . . published last Tuesday the first definite German admission concerning the way in which the Germans use dead bodies.
"We pass through Everingcourt. There is a dull smell in the air as if lime were being burnt. We are passing the great Corpse Exploitation Establishment (Kadaververwertungsanstalt) of this Army Group. The fat that is won here is turned into lubricating oils, and everything else is ground down in the bone mill into a powder which is used for mixing with pig's food and as manure---nothing can be permitted to go to waste". ("The Times," April 16, 1917).
There was a report in The Times of April 17, 1917, from La Belgique (Leyden), via L'Indépendance Belge, for April 10, giving a very long and detailed account of a Deutsche Abfallverwertungs-gesellschaft factory near Coblenz, where train-loads of the stripped bodies of German soldiers, wired into bundles, arrive and are simmered down in cauldrons, the products being stearine and refined oil.

When the Israelis pulled out of Gaza they adopted a scorched earth policy insofar as their constructions were concerned. The demolished everything. I remember watching a British television channel focusing on some Jews trying to obstruct the demolition of a synagogue in that occupied whilst ignoring the rubble all around. Nobody bothered that the Palestinians had millions of tons of concrete rubble to deal with.

But these falsehoods about soap makes the world hang its head in shame.

The Antichrist Satmar take their name from that of a Catholic saint!

A movie about Romanian soap burials entitled Monuments of Soap was made by A Romanian Jewish ex-Communist refugee living in Los Angeles named Tuvi Gutman who donated free copies to every branch library in Los Angeles county and beyond. Eric Hunt has uploaded it to YouTube. Spoiler alert: Romania was the exit point of the European exodus, not a Nazi soap factory. Warning: Three hanky violin schmaltz ahead. http://www.youtube.com/watch?v=tXX1Bq8PJoY