This Yom Hashoah canonization date is very fitting. One of JPII's first public papal acts was to prostrate himself at 'The Death Wall' at Auschwitz and then proclaim, "I kneel at this Golgotha of the modern world." 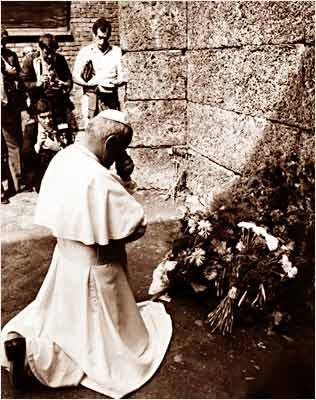 Posted by Maurice Pinay at 1:22 AM

The liberal modernist logic that is judeao-centrism at every cost. Roman Catholicism has been abrogated by the anthropocentric Novus Ordo Seclorum. Popes can be freemasons; pray at the synagogue and hold neo-Masses for the freemasons.

Freemasonry has a firm hold on The Vatican and will only let go when Our Blessed Lady restores some sensus catholicus to the papacy.

In the meantime, the new church still covers up for its criminal presbyters and bishops who abuse the flock entrusted to them. The Holocaust of sexual abuse of minors and financial fraudsters continues to suck any remaining credibility this chaotic and divided institution has left. May its welcome end come soon. There will be a Golgotha indeed!